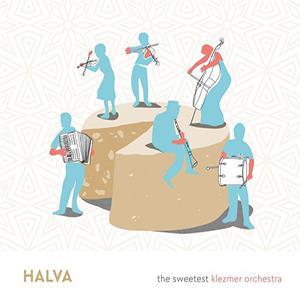 'The Sweetest Klezmer Orchestra' the long player debut of Halva, a six-piece klezmer project around Belgian violinist Nicolaas Cottenie, for which he went in search of the musical links between traditional klezmer and the influences of local cultures in countries like Greece, Hungary, Ukraine and Turkey, areas where the Ashkenazi Jews settled after their exile from Israel by the Romans and where klezmer sub-styles like kolomeike, sher and terkish were developed. For the project, Cottenie joined forces with American-Latvian accordionist and pianist Ilya Shneyveys, and veteran German clarinetist Georg Brinkmann (see for example 'Dobriden'). The title and cover image of 'The Sweetest Klezmer Orchestra' refer to the name of the band, a sweet vegan delicacy based on tahin, a paste made of sesame seeds, glucose, sugar, vanilla and root extracts of soapwort, popularly known in the Jewish community as tahini halvah. On the almost entirely instrumental 'The Sweetest Klezmer Orchestra' (the voice of clarinetist Georg Brinkmann can only be heard in closing track 'Song For A Dance'), that typical mix of melancholy ('Doina', 'Dobriden', 'A Finny Little Terkish') and festive exuberance ('Sirba', 'Sher Nomer 0', 'Latviyska') that is so characteristic of the klezmer genre. Excellent stylistic exercice!