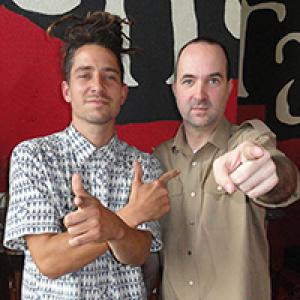 Daddy Cookiz, musically speaking you have more of a hip-hop then a reggae background, right?
Daddy Cookiz: "Absolutely! Before I joined Atomic Spliff I was part of a hip-hop crew Mains Sales together with a brother called Marco Soza, with whom I even recorded an album called 'Six Pieds Sous Terre' ("six feet underground"). As I always felt a positive vibration when listening to reggae, after a few years I decided to explore that side of my musical personality as well and since doing that as a member of Mains Sales wasn't an option, I decided to launch my own mixtape which was titled 'L'école Des Sound Systems'.

You hail from Liège, but Stoneman is from Andenne near Namur. How did you guys eventually meet up?
Daddy Cookiz: "Well, in those days - we're talking somewhere around 2010 - Atomic Spliff was still more of a collective with Stoneman working, among others, with Jagan Makoka and Deuxtreize. They organized monthly parties at Le Live Club in Liège. At that point I was just a face in the crowd enjoying the vibes, but Stoneman had heard my mixtape and one night invited me to MC alongside him. That guest-spot gradually grew into a regular thing with me and Stoneman freestyling and improvising together. That's how the idea ripened to really turn it into a project inspired on rub-a-dub duo's like Michigan & Smiley, Clint Eastwood & General Saint and of course Raggasonic, who we were enormous fans of."

Atomic Spliff is often compared to Raggasonic. What's your take on that?
Daddy Cookiz: "I consider it an absolute honor to be compared to these guys! It's a band that I respect a lot. That being said, we've never set out to sound like them, but just as Big Red and Daddy Mory, we draw on rub-a-dub, ragamuffin and early dancehall for inspiration."

You guys released your debut album 'Ras Attack' in 2015, which won the Victoires Du Reggae later that same year. What sort of an impact, if any, did winning that award have?
Daddy Cookiz: "Well as an artist it's always nice when you're music is also appreciated in another country than your own. France has a huge reggae scene with a lot of bands and artists, so it's not easy to conquer a place and gain a fan base. Winning this award definitely opened doors for us. The difference with Belgium, where the reggae scene is mostly focused on foreign acts, is that in France attention is centered more on local artists and bands. It's a pity, because whenever we perform abroad, we're always proud Belgian ambassadors."

You're still auto-producing all of your music and albums. Have you guys never considered teaming up with a label or a distributor?
Daddy Cookiz: "Well we've just joined forces with Undivided, a Brussels based agency, taking care of our bookings and press promotion, but where our music is concerned we like to control the creative process, so we can turn out the songs and sound we want to."

I know there's also a whole visual side to Atomic Spliff, which is more Stoneman's department. Each of your albums is accompanied by a comic. What's the philosophy behind that?
Daddy Cookiz: "Well, before I go into the comic book side of things, I should mention that I've been into graffiti since my early teens and Stoneman is professional sculptor and graphic artist, so it kind of made sense to take care of our own artwork. When we were working on 'Ras Attack' we started contemplating what to put in the liner notes to explain the songs on the album and what kind of artwork to use. We didn't really feel like putting our faces on the cover, because that's not what we are about, and instead started drawing things, which eventually led to the six page comic accompanying the album. For the comics we always collaborate: Stoneman draws the various scenes and I'm responsible for coloring them in. After we released the album, Stoneman told me he wanted to develop the comic idea further and realized an extended version with a whole story attached to it. The fun thing is that in the dialogues of the comic you'll be able to find all the lyrics from the album. It's like a comic book version of a video clip if you want."

Both 'Ras Attack' and 'Robomuffin' seem to be heavily influenced by science fiction. Are you guys big fans of the genre?
Daddy Cookiz: "Absolutely! I don't think there's a single member in the band who isn't into 'Star Wars' or 'Star Trek'. (laughs) Even though message in a lot of our songs is a serious one, we still want our music to be fun as well, so we try to let our inner child come out whenever we're creating a new album. We grew up in the eighties, watching science fiction and playing video games and that's reflected in our songs. Take 'We Are Digital' from 'Ras Attack' for example; in that song we talk about iconic arcade games like 'Super Mario Bros.', 'Pac-Man' and 'Space Invaders'; no one from our generation won't remember what these games represented!"

In Belgium we still have what we refer to as "the language barrier" between Flanders and Wallonia; resulting in the fact few French speaking bands seem to make it across to Flanders. Is that also your experience?
Daddy Cookiz: "For sure… I think it's a shame though, that a lot of people when thinking of reggae are still stuck on English or Jamaican patois. Reggae music has become a worldwide phenomenon now, so it shouldn't really matter what language you sing in. It's like limiting yourself musically, because there's so much non-English reggae out there. Also, it goes against the Rastafarian message of unity and breaking down barriers. It makes no sense to me."

In conclusion, are Atomic Spliff happy doing their thing hidden away somewhere in the Wallonia countryside, our, like so many other bands, do you dream of being able to record in Jamaica one day?
Daddy Cookiz: "Well, Jamaica is where it all started, so I feel we can't but visit the island one day, but if we do, it will be with a clearly defined project in mind, not just as tourists. But to be honest, we're happy where we are. We already give thanks to be given the opportunity to travel all over Europe to promote and perform our music."