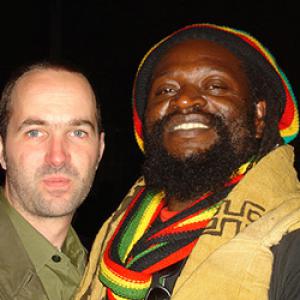 Beta, you're often described as a well-travelled individual. What is it you're looking for in your voyages?
Beta Simon: "Life is a book and travelling is like reading a chapter of that book. The more one travels, the more one starts to have a grasp of the sense of life. You can learn great things walking the earth and man is a being that never really stops learning."

You didn't start out your career as a musician.
Beta Simon: "I learned a bit about mechanics when I was younger, but I've never studied to become a mechanical engineer. These days I'm no longer involved in all that. I'm a singer and I grow flowers, so I'm a horticulturalist as well."

Did you have a love for reggae from the very beginning?
Beta Simon: "Maybe not from the very beginning, no. In Ivory Coast more than sixty languages are spoken and each of these languages has at least five rhythms, so it's only natural that I was primarily influenced by those traditional rhythms. Reggae doesn't necessarily come from Jamaica; the Jamaicans are descendants of African slaves, so it's in Africa that reggae has its real roots and we've got rhythms that are really similar. Before anything else, I'm a singer and I don't limit myself to one style."

Beta Simon also invented Baïssadé. Could you explain what it entails?
Beta Simon: "Baïssadé is a language I invented myself. I reworked, reinterpreted and enriched my mother tongue, which is Bété. My real name is Bai, so "Baïssadé" means "the way Bai speaks". In all African languages there are western words, like "television" or "telephone", which simply don't exist. Often these words are just adopted from French or English without being translated. I went in search of the etymological history of these words and afterwards tried to find a suitable equivalent in Bété. If I take the word "television" for example, that would become "youguiopass" or "a way to watch from a distance"."

You also speak of the linguistic discrimination African languages are facing.
Beta Simon: "Linguistic discrimination is one of the tools used to monopolise Africa. Your manner of speaking, your way of thinking, defines in part your character. Someone who speaks Flemish, will have a Flemish character and someone who speaks French, will have a French character. A language is much more than just a way of communicating; behind the words and sounds, ancient traditions and ways of life are hidden, so if we in Africa are unable to preserve our native languages, then our whole way of life is threatened with extinction! Because of the influence of Western languages, today a lot of African languages are on the verge of extinction already. I call that a linguistic genocide. That doesn't mean you shouldn't learn to speak another language, but you should never forget your own!"

You recorded your latest album, 'Kraity Payan Guez', in collaboration with Tiken Jah Fakoly. How did the two of you originally meet?
Beta Simon: "Both Tiken and I are Ivorian. I'm a little bit older than him, but as we're both doing the same style of music, we've known each other a long time already. I helped him out a bit when he was still starting out in the business and, by producing my album, he wanted to repay the favour. Furthermore, he also sang on a track for the album and I did some lyrics for a song on his ('Ma Côte D'Ivoire' on 'L'Africain', red.). We've been brothers for the longest time."

The song you were just talking about is 'Iyo'. Could you tell us what it's about?
Beta Simon: "In that song we speak about unity, focusing primarily on the situation in Ivory Coast, because Tiken is Dyula and I'm Bété. Ivory Coast has just passed a period of great instability caused by malevolent politicians. 'Iyo' calls for unity and brotherhood between our two peoples. Because of the political games played in many African countries these days, the African people are forgetting who they really are and are left killing one another to please the interests of outside parties."

What's the meaning of the album title, 'Kraity Payan Guez'?
Beta Simon: "'Kraity Payan Guez' means "May God bless us!" and I chose that title because I truly believe that man is in dire need of some divine blessings. You can have all the money in the world and sleep in a golden bed but that won't keep you from having nightmares! We all feel the need to find inner peace and the blessing of God could enlighten us in the things we are doing. I'm praying for the fulfilment of the divinity that's within every individual. When I, as an African, use the word "God", I'm referring to the inner light that is within each and every one of us; the light that is the life force of all beings on this planet. That God is present everywhere and in everything and if we give him the respect he's due, things could start changing for the better. If God gives us his blessing, we will become illuminated and once we're illuminated we'll finally be able to respect the gift he's bestowed on us!"