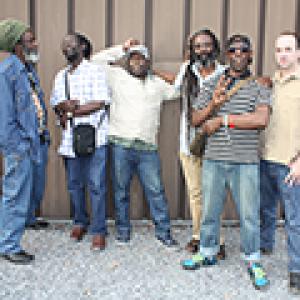 Guys, if am I correct, the core members of Black Roots met while playing dominos. What led you to start a band?
Errol Brown (vocals): "Well we were just some youths hanging out together who started out playing music just in order to have something to do."
Kondwani Ngozi (percussion/vocals): "Because of the dire situation we grew up in, we weren't really inclined to start doing love songs; we wanted to sing about our plight and the reality we had to face on a daily basis."

The area where a number of you grew up was St Paul's, an inner suburb of Bristol. What kind of an area was it back in those days?
Kondwani Ngozi: "St Paul's was a rough place! It was a place for the underprivileged and also an area with quite a large black population. You literally had to fight to survive there. These days it's become somewhat of a hip part of town though."

It's also the area where the annual carnival, Bristol's answer to Notting Hill Carnival, is held.
Errol Brown: "Was held, because for the first time in many years the carnival was cancelled this year. To us the carnival represented a celebration of our culture and heritage, and the part black people played in the history of the city as there's been a black presence in Bristol ever since the days of slavery. A lot of people were left very disappointed this year!"
Carlton Smith (vocals/keyboard): "It's a great shame they cancelled it, because especially these days there is a huge need for people to be able to come together and enjoy themselves. It was a true multicultural event bringing together people from all different walks of life and different origins. Hopefully the council will see sense and reinstate it!"

Errol just mentioned the slavery history of Bristol there. That's also one of the topics of 'Bristol Rock', a song that tells the tale of a black slave called Scipio Africanus. What can you tell us about him?
Kondwani Ngozi: "Scipio Africanus was a black slave living in Henbury, a suburb of Bristol. He worked as a manservant for Charles William Howard, 7th Earl of Suffolk, but was a very intelligent man. He was buried in the churchyard of St Mary's in Henbury and is the only black man buried there as the rest of the graveyard is filled with tombs of white people. To us he symbolized the struggle of the black man in the United Kingdom. We're no longer slaves in the strictest sense of the word, but our struggle continues!"
Carlton Smith: "I hadn't heard of Scipio until we did the song about him, but to me that's what Black Roots is about; we do message music, sharing our culture and history through song and I think that's a great way to get these messages across."

Another well-known Black Roots tune is 'Frontline', which was used as the theme tune to a BBC series of the same name. Did you guys write the tune especially for the series?
Errol Brown: "We already had some links with the BBC and that's how they came to approach us to see if we could do the theme tune for this television series."

For those who might not remember the series, what was it about?
Carlton Smith: "It was about two brothers, one called Malcolm and the other Sheldon; with the first one being a police officer and the other one a dreadlock. The series was really about their conflicting views, but all very tongue in cheek. It was a comedy series, with some home truths hidden left and right."
Kondwani Ngozi: "Even though it was comedy, the situations the brothers found themselves in were still pretty close to the everyday reality black people in the UK were experiencing in those days."

In the mid nineteen eighties Black Roots joined forces with Mad Professor for the 'All Day All Night' album; a conscious decision to try something different?
Kondwani Ngozi: "It wasn't anything premeditated; we just liked his sound and decided to link up to do an album with him."
Carlton Smith: "At the time Professor's sound was fresh and new and I think the combination of his dubby style with our lyrics worked really well."

Did you guys always manage to make a living from your music?
Errol Brown: "Especially in the early days it was a bit of a struggle. The different labels we went to all wanted us to water down our music and since we didn't want to do that the only option was to establish our own record label (Nubian Records, red.), but taking the independent approach wasn't easy so we definitely had some hard times."

Just wondering, are all of you guys self-taught or was there some musical schooling involved?
Carlton Smith: "Most of us are self-taught, but our guitarist Cordell (Francis, red.) is a classically trained musician and getting that input was invaluable. It also made me look into taking up some lessons from tutors to better myself as well. That's where I got a rudimentary take on how music works."

In the second half of the nineteen nineties, Black Roots had pretty much split.
Errol Brown: "Well, we didn't really consider it a split as such, for us it was just a temporary break so we could pursue other things for a while."
Charles Bryan (vocals): "In that period I travelled to Jamaica where I recorded a solo album called 'Farm Digging' (Sounds Good Ltd, 2005, red.)."

I'm guessing the fact Makasound started reissuing older Black Roots material had something to do with you guys joining forces again?
Errol Brown: "Makasound really did a great job as their reissues introduced our music to new audiences in France and beyond, and to a whole new generation of reggae lovers as well. Both our previous album, 'Ghetto Feel' and our new album, 'Son Of Man', are distributed by Soulbeats Records, once again a French label. Reggae is huge in France man!"

Kondwani, you and your brother Jabulani officially changed your names at one point.
Kondwani Ngozi: "The fact I changed my name had nothing to do with Black Roots. As members of the nyahbinghi order we rejected our English names which we considered to be our slave names and replaced them with an African one. Personally I feel much more comfortable with the name I have now than with the one I had previously."
Errol Brown: "Sadly the younger generation seems to have lost that longing for an own identity."
Kondwani Ngozi: "To reflect on these things you have to experience hardship, but these days most youths grow up in relative luxury having everything at their fingertips, so as Errol just said, the longing for something more, something bigger is gone."

There's no denying the world is in a crisis at the moment. Do you think that fact has anything to do with the renewed interest in roots reggae?
Kondwani Ngozi: "Yes, and logically so I would say, because everyone needs something to hold on to. The thing is it's also no longer just black people going through strife and tribulation; we're literally all in the same boat now."

Black Roots hails from Bristol which is only a stone throw away from Bath where His Imperial Majesty sought refuge in the nineteen thirties. With the presence of Haile Selassie I almost tangible, to you guys what is the essence of Rastafarianism?
Kondwani Ngozi: "Peace and love, truths and rights…"
Carlton Smith: "...and trying to live together in harmony! One love!"