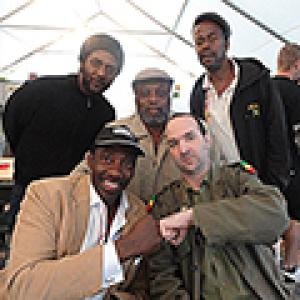 Guys, what spurned the whole Black Slate reunion?
Anthony Brightly (keyboards): "Well, what you need to know is that when we called it quits back in the day  it wasn't because we fell out with one another or because we were tired of what we were doing, but because we wanted to prepare ourselves for the changes that were happening in the music business. Originally we only intended to take a break, but the things we got involved in turned out to take a lot more time and energy then we had expected. We always said that if we ever would go on the road again it would be because we wanted to, because we could and simply for the love of the music."

One face that's not part of the reunion is vocalist Keith Drummond. What happened to him?
Anthony Brightly: "Originally Keith only joined the band about five years after its formation. The thing is Black Slate really only had one big hit, 'Amigo', so if we wanted some stability to provide for our families, the wise thing was to search for a career outside of music and that's exactly what Chris, Desmond and myself did. For Keith and Elroy (Ras Elroy Bailey, red.) the focus remained on music, so they both went on to pursue solo careers."

Have you changed your approach to music, to touring and so on?
Desmond Mahoney (drums): "This time around, we're in control of everything we're involved in. To give you just one example: through Music House, run by Chris, we're reissuing our entire back catalog so we don't have to deal with album deals, record labels or what have you."

Chris, I know you've been involved in the vinyl distribution business for quite some time now. With vinyl once again being a hot item, business must be booming?
Chris Hanson (guitar): "(laughs) Vinyl has never really been away you know, but it's true that it's now really popular once more and we're certainly feeling that."

You were born in Kingston, but moved to the United Kingdom when you were fourteen years old. Did you experience what's commonly referred to as "culture shock"?
Chris Hanson: "The reason I came to the UK was because my mother, who was already living here, sent for me; so I didn't really have a choice. To me it felt just like a transition from one country to another or from one place to another. I never really experienced culture shock as such. In fact because I was into sports - I played cricket - I fell in quite easy joining the school cricket team."
Desmond Mahoney: "The only shock we experienced coming here were the nine months of winter! (laughs)"

Before there was Black Slate, you guys were already playing together as Young Ones From Zion. What made you decide to change the band name?
Anthony Brightly: "Well for one thing we were getting older! (laughs) No, in all seriousness, we found it to be a bit long. When we started out we were really just a backing band for a talent competition and when we were asked what the band was called sort of on the spot we came up with Young Ones From Zion. It was when we started to be a bit more established and were backing well known artists of the likes of Ken Boothe, Dennis Brown, Owen Gray and Errol Dunkley that we decided to rechristen the band Black Slate. Back in the day, slate was used to write on, to transmit messages, so it seemed fitting, but there was also a second meaning: Chris used to work at British Telecom and they used to have a cable they used also called "black slate", so once again a means of transmitting a message."

Anthony, going back even further you were in a band called Mystron 5.
Anthony Brightly: "Back in those days you had the Jackson Five who were hugely popular, so that's where the five came from and the Mysterons were alien characters from a science-fiction series that was shown on television at that time called 'Captain Scarlet & The Mysterons'."

When you started out as Black Slate was it your goal to become a British roots act?
Anthony Brightly: "We never really set out to fit into any category, and with the broad range of music we listened to, I don't think we sounded like any other band out there. Black Slate represents a unique blend of r&b, soul, reggae and rock, but inevitably people started to try and label us after a while."
Chris Hanson: "In Belgium and Holland we were even marketed as a disco-reggae band for a while (laughs)!"

Did Rastafarianism play any kind of role in the music of Black Slate?
Anthony Brightly: "Oh yes, it played a big role in what we did."

I'm asking of course because 'Amigo', still Black Slate's biggest hit to date, was a Rastafarian inspired song.
Chris Hanson: "Well, that's how it was interpreted, but in Spanish "amigo" just means friend, so it can be about friendship just as much as it can be about Rastafari; it just depends on how you want to listen to it."

'Amigo' became so big that it more or less changed your lives overnight. How do you look back on the song now so many years later?
Chris Hanson: "For the most part it was a good thing, because as you said it made us known all over the world and it got us to play in front of crowds we could otherwise never have dreamt about."

Anthony at one stage you developed this work etiquette or life philosophy - I don't know what you want to call it - known under the P.R.O.M.P.T. acronym. Could you fill us in on what that's all about?
Anthony Brightly: "It's really a charitable organization that I started back in 2007. The UK government had made a lot of changes in the education system and with that came a surge in gun violence. When I experienced that first hand, I decided to act and try to do something about it and that's how P.R.O.M.P.T. came about. The acronym stands for Purpose, Respect, Obedience, Manners, Punctuality and Training. Basically we try to provide youths with the tools and opportunities the government is no longer providing them with, to show them that anything is possible and that there are other options out there then dealing drugs and touting guns. The latest project we're involved in is a retail network where we're teaching these youths to market and sell their personal brand of goods."

Something that is perhaps a little lesser known is the fact you guys were involved in quite a lot of the lovers rock productions coming out of the UK in the past decades.
Desmond Mahoney: "Oh yes! We worked with all of them: Carol Thompson, Janet Kay, Jean Adebambo, you name it. We were mainly involved in production work. We also produced Pablo Gad's 'Hard Times' album for example, which is now a UK roots classic."
Anthony Brightly: "With our combined forces we simply became the go-to-guys for everything to do with reggae in the UK at one point. We simply became the industry!"

Closing question… In your opinion is there a difference between Jamaican and UK reggae?
Anthony Brightly: "To me reggae music is reggae music, but it's also more than just music: it's a culture and a lifestyle. The different subgenres within reggae music are all just branches of the same tree!"