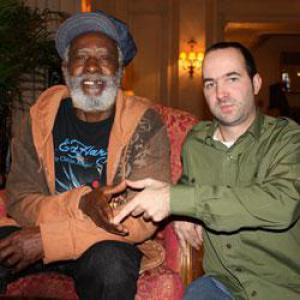 Spear, 'Jah Is Real', an album you auto-produced from start to finish, earned you a Grammy award in 2009, a gratifying feeling?
Burning Spear: "I already started to get this longing for independence back in the eighties. I wanted to do things my own way and be in control of my work. The first album I more or less produced on my own was 'Live At Montreux Jazz Festival 2001' (Burning Music, 2009, red.), which also earned me a Grammy nomination. I continued this process on the albums that followed, but for 'Jah Is Real' I took it just a step further as I did all the work myself together with my wife (Sonia Rodney, red.), without any help of a major label. For the album I worked together with well-known musicians like Bootsy Collins and Bernie Worrell (both known from their work with funk bands like Parliament and Funcadelic, red.) and I have to say it turned out even better than I expected."

The past years you've been putting a lot of your energy in trying to get the rights to your catalogue back. With all the problems you've had with various labels is there still anything positive to say about collaborating with a major?
Burning Spear: "Well, back in the day when I was still dealing with companies like Island Records or EMI, there were also ups and downs, but the overall situation was not the worst. It was also these companies that gave me my first big break in the music business. I'm convinced you will always face ups and downs as a recording artist, but I firmly believe that I'm entitled to own what is mine."

In the previous interview we did, I mainly focused on the autobiographical DVD you're working on. It still hasn't been released to this date, so I have to ask you to give us a quick update on where you're at with that project now?
Burning Spear: "Things are still progressing well, but completing a documentary project like this takes a lot of time, especially if you want to do it right. I never had a fixed date in my mind for its release; my main concern was to do a good job."

You just mentioned it there, Burning Spear four decades in the business. You're getting at an age now that every time a new concert date is announced voices are whispering this might be your last one. How do you respond to rumours like that?
Burning Spear: "(laughs) Well, I'm definitely not touring as before anymore and I guess you could say I'm in the pre-retirement phase of my career now. I know there's still a lot of fans out there who want to see Burning Spear playing live, so I use my discretion to choose the concerts I want to play."

You called your last album, 'Jah Is Real', which begs the question if there was ever any doubt about that?
Burning Spear: "No, there can never be any doubt that Jah is real. Jah is life, love and peace. Religion creates a lot of division, because everyone looks at God in a different way. There's only one creator though, no matter what name you want to call him. I&I say Jah, some people say Jesus and others call him Allah. When you speak out about religion you have to be careful, because it's a very sensitive area for a lot of people. By simply saying: "Jah is real!" I'm provoking no one, though; I'm simply stating a fact."

In 2007 you were sent to Kenya as a special envoy to the United Nations. How did that mission come about and what impression did it leave you with. Your moniker "Burning Spear" was also the nickname of Kenya's first leader Yomo Kenyatta, so there was at least some symbolism to the trip.
Burning Spear: "The United Nations contacted my wife at one stage and put forward their proposition. In 2007, Kenya was going through some uproar (After the 2007 elections, protests escalated into violence and destruction of property, almost 1,000 people were killed and nearly 600,000 displaced. The dispute caused underlying tensions over land and its distribution to re-erupt, as it had in the 1992 and 1997 elections. Hundreds of thousands were forced off their land to relatives elsewhere in the country. A group of eminent persons of Africa, led by former United Nations secretary-general Kofi Annan, brokered a peaceful solution to the political stalemate, red.) and my presence and performance in the country calmed things down at least to some extent. The concert created a oneness among the Kenyan people and a brief moment of peace. The separation between people trying to live together is often created by politics and I hope I contributed in some way in making the Kenyan people realise that."

You already stated how important freedom and independence are for you. It seems only fitting you're performing at the Festival des Libertés (Freedom Festival, red.).
Burning Spear: "(laughs) I'm an independent artist talking about freedom and independence and since the festival is also addressing these issues the connection couldn't have been any better. Freedom is not something that's gained easily, it's something you have to work towards. You have to claim your independence and have the right arguments to defend it. Being absolutely free is certainly no easy feat!"