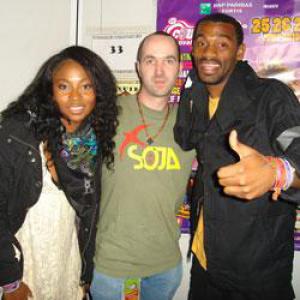 Tostao, can I simply call Choq Quib Town a hip hop band, or does that description fall short of what you represent?
Tostao: "Well, we started with this project about ten years ago and in the beginning we were mainly focusing on hip hop music. Along the way we started to fuse our music with elements from traditional Afro-Colombian music though, the music from Colombia's Pacific region, so just defining ourselves as just a hip hop band would not be correct anymore, because these days we even incorporate influence from styles like funk and dancehall in our music. I guess you can only define our sound as Choq Quib Town! (laughs)"

The traditional Afro-Colombian rhythms you just mentioned listen to names like porro choqoano and currulao. Could you tell us a little more about them?
Tostao: "In the porro choqoano, the main accent is on percussion. In the song 'Eso Es Lo Que Hay', we mixed that style with dancehall, because rhythmically the two are very similar. For 'Oro' we used the currulao rhythm and mixed it with some rap lyrics. Then there's bunde, which you can hear in 'San Antonio' and which we mixed with some hip hop flavours again. The names of our traditional rhythms might not be that well-known yet, but it's exactly our mission to change that. With Choq Quib Town we're trying to put Afro-Colombian culture on the map."

What sets you apart from most other hip hop groups is that a lot of what you do on stage is instrumental. Is using actual instruments instead of samples important to you guys?
Goyo: "Let's say it's important when we play live, because working with live instruments gives you a freedom to improvise that samples do not allow for. That freestyle playing is part of what Choq Quib Town stands for."
Tostao: "The fact we use these instruments is also one of the reasons why we can't be defined as just a hip hop band. I think if we would play the same music, just by using samples, the public wouldn't understand what we are about and of course it would also sound different."

One instrument you used on the album, but that you did not bring with you on tour - I guess because it's too heavy - is the marimba. It's quite an unusual instrument to combine with hip hop, but is it commonly used in Colombia?
Tostao: "Oh yes, it's mainly used in the southern part of the country to play rhythms I just mentioned. It's way too big to bring along on tour, but we're using some marimba samples instead."

Compared to the history of the Afro-American in North-America, that of the Afro-Americans in South-America is still rather unknown.
Goyo: "Well, the fact the history of the Afro-Americans in South-America is largely unknown to the rest of the world, is because there's still a lot of racism; our history is just not important enough to be told. It's not easy to be black in Latin-America. With Choq Quib Town we're slowly trying to break the silence and be proud of our culture. We're Colombians, but we're Afro-Colombians first!"
Tostao: "If you would check the different television channels in Colombia for example, you will see little or no black people appear in their programs. Changing that is a huge task, because we really have to change the mentality of an entire nation and maybe even an entire continent. Our music is the channel we use to pass that message."

You guys are from a region called Chocó, where the majority of Afro-Columbians live. Are things still that segregated in Colombia?
Goyo: "Yes, black people are still marginalised on a regular basis. Chocó is like a forgotten area of the country. There's still a lot of corruption in Colombia and Chocó isn't really first on the agenda. Even when there's a natural disaster in Chocó, it won't be mentioned on the news at night. It's the forgotten corner of Colombia. That's another reason why our music is so important; we're giving these forgotten people a voice and a face, because for them we're like a beacon of hope."
Tostao: "There's no actual segregation in Colombia though. There are Afro-Colombians living all over the country, but there's still a lot of racism and basic disrespect. The reason for this is usually ignorance. Most Colombians know little or nothing about Afro-Colombian history and culture."

Your song 'Somos Pacifico' has now almost become an anthem. How important would you say has that song been for the Afro-Colombian community?
Tostao: "It's definitely like an anthem, yes. When we released that song more than five years ago, musically speaking Colombia was still very much focused on cumbia and vallenato, so this new rhythm really fell like a thunderbolt. It made Colombians discover a whole new part of their own identity, so 'Somos Pacifico' is not only an anthem for the Afro-Colombian community, but for the entire country. Before that song no one ever mentioned the Pacific area of Colombia, so to have a song introducing almost an entire culture, being played on national radio and television, was revolutionary. It has become like our business card! (laughs)"

Goyo, some people might already know you as the lead-vocalist for Sidestepper (Colombian band centred around English deejay/producer Richard Blair and Colombian producer/songwriter Ivan Benavides. Their sound is influenced both by Afro-Colombian popular music styles like salsa and cumbia as well as electronic dance music such as dub and drum and bass, red.). Just as a singer, what is the big difference for you between being on stage with Sidestepper or Choq Quib Town?
Goyo: "To me, Sidestepper is more of a collective, where I represent a certain element from Colombia's Pacific coast, but Choq Quib Town is really my project; I compose the music, I write the lyrics to the songs and my heart is really in this band."

You're also man and wife. How is that to be on the road and working with each other day in day out?
Tostao: "Sometimes it's hard, man! (laughs) When we're on stage or rehearsing, I can react differently then when I'm not working and, at times, I might say things to Goyo that otherwise I wouldn't. What Goyo tends to do is use her female charms, like looking at me all innocent and cute, to get something done. Other times, this is the best thing that could ever have happened to us. She understands me better than anyone else and I understand her better than any one else. We've been together for about ten years now and we're still having fun!"