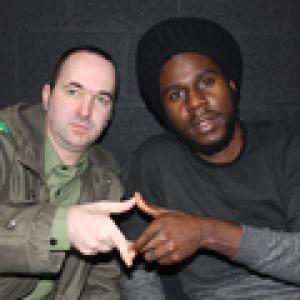 Chronixx, you already penned your first tune at the age of five. What can you still remember about that song?
Chronixx: "It was a tune about poor people and upliftment, just like what I still sing about today. It was from around that age that I knew I wanted to become an artist. I formed a band with my brothers and sisters, but in the end I'm the only one who persevered and really got a career in music."

Alty Nunes is a person who had a profound influence on your career, but his name might not ring a bell with most people. Could you tell us a little bit more about him and why he was so important to you?
Chronixx: "Alty Nunes aka Jah Ova Evil aka Lil Joe, was a youth that I met when I was still earning a living as a producer, before I started my singing career. We hooked up for a project and I remember I was humming along to a song at one point. He heard me and told me: “Bwoy you can sing you know, you should pursue a career as a singer!”. I still met him once after that, but not much later, on February 7th 2011, I got news of his passing (Nunes passed away after suffering a cerebral aneurysm, red.). After his burial I got better acquainted with his brothers Aijah and Jahnoi and was basically living at their house for a while. It was there that I recorded my first project, which was called 'Hooked On Chronixx' (Zinc Fence Records, 2011, red.) containing tracks like 'Behind Curtains', 'Start A Fyah', 'Rain Music' and 'Warrior'. There's a musical energy at that place. Alty's mom is Patsy Ricketts, one of Jamaica's most famous dancers and choreographers. I can't but pay my respects to that family and even though Jah Ova Evil never lived to experience it in the flesh, I'm here to keep his legacy alive."

You come from a musical family yourself, your father being Chronical. I know you've written and produced several tracks for him in the past, but have you never contemplated recording a tune together?
Chronixx: "Most definitely so, and to tell you the truth, I have some crazy ideas about what that should sound like. My father is a wide range singer and he's capable of a lot more than what he has shown thus far. It would be great if I was the person who could get that out of him."

Zinc Fence Band, the band you record and tour with, is like a sort of second coming where a number of the musicians are concerned: guitarist Stephen Coore is the son of Third World's Cat Coore, Nnamdi Robinson, also on the guitar, is the son of legendary trombonist Nambo Robinson and Joshua is Chalice drummer Desi Jones' son. How did you guys all get together?
Chronixx: "Well, Joshua ('Flubz' Jones, bass, red.), Nnamdi and Stephen already knew each other and I already knew Yello, the keyboard player, from church. Elisha 'Zeb' Ellis (drums, red.) was part of the first band I played with, called Black as Cole. When we started Zinc Fence I gave him a call and he was immediately prepared to join. Joshua I knew from hanging around at Mikey Bennett's studio. He used to play bass for Jah9. That's how it all started and the band kept growing from there."

Is it important for you to be able to tour with your own band rather than hooking up with a local baking band?
Chronixx: "Even though for us reggae is an inborn thing, some of the European bands and musicians are pretty good, but it's not just about that; to me it's also about presenting opportunities to young Jamaicans. As a youth coming from an unprivileged background I know all too well how important it is to get a chance to show what you can do. Jamaica is overflowing with talent, but only few will ever get the chance to fulfil their potential. Jamaican musicians aren't being hired to play rock or country, so I don't see the necessity to play with an American or European backing band. The oldest member of Zinc Fence Band is still in his early twenties and if you hear how tight they already sound, can you imagine what they will sound like in a couple of years? (laughs)"

If there's one team of European producers you have a special link with it has to be Special Delivery from France. How did that relationship start?
Chronixx: "I first met Pierre (Bost, red.) when he came to Jamaica back in 2011, when he asked Teflon and myself to produce some riddims for him. At that time I was on a crossroads in my career as I was getting more and more frustrated working as a producer. I hadn't made enough of a name for myself yet, so I couldn't really work with the people I wanted to work with, because when you're young you don't really have a reputation yet. When we were listening to the riddim I had produced, I also played him the version I had voiced myself. Pierre was surprised I also sang and from that point onward he started recording me on his riddim. I think Pierre must have enough Chronixx songs in his catalogue by now to be able to release a complete album! (laughs) Pierre is someone with a natural taste for music, not just reggae, but music in general and that's something we definitely have in common. Over time he started helping us getting bookings, ensured that my songs got airplay and so on, so I really consider him part of the team now."

Your new EP, 'The Dread & Terrible Project', was highly anticipated and you definitely took your time releasing it. Are you somewhat of a perfectionist where your own work is concerned?
Chronixx: "Not really, no. In all honesty I don't think I even come close to being a perfectionist. I believe things are perfect as they are. When I go into the studio whatever we end up with is perfection to me. It has to feel organic and real. Don't get me wrong I'll still do several takes of a song, but never because I consider one take better than then other; it just offers the luxury of choice. If had to choose words to describe my working ethos I would say meticulous and diligent."

Where your influences in music are concerned, there's one duo that always pops up and that's Sly & Robbie.
Chronixx: "Sly & Robbie are riddim masters and when they play together you get a kind of magic. As producers they are very open-minded; they've already moved on from certain things I'm still experimenting with! For them music is music and they don't really care whether it's reggae, pop, rock or what have you. In my opinion it's their experimentation with all these other genres that made them able to lift reggae music to another level. Take the electronic drums and drum machines Sly started using at one point; that was something from pop and rock music, but he incorporated that sound in reggae. As a young musician, you can't but look up to people like that. I rate them very highly!"

Lately we've been seeing this whole new wave of conscious artists coming out of Jamaica - Jah9, Protoje, Kabaka Pyramid, Iba Mahr, to name but a few. Are you guys truly the musical family we in Europe consider you to be?
Chronixx: "There's definitely a social connection; we all know each other and hang out sometimes, but that doesn't mean we're constantly working together all the time. We've been brethren and sistren long before the music thing came along. In our own unique ways and even though we all come from a different musical background - Kabaka has more of a hip-hop background and Protoje and Jah9 have the poetry thing going on - musically speaking we all serve the same purpose, so there's a spiritual connection there as well. I think what we are doing is just evolution and elevation of what was already there before and that's something that's happening in reggae across the globe, not just in Jamaica!"

I've seen you were the classic red gold green tam most often associated with the Twelve Tribes movement. Is that where you situate yourself in Rastafari?
Chronixx: "Rastafari is a tree with many branches, and I embrace them all. That tam was given to me as a gift when I was staying with Jah Ova Evil's family, as they are all Twelve Tribe members mixed with being Ethiopian Orthodox Christians, like His Majesty was. I find that most of the houses in Rastafari are intertwined anyway and division never leads anywhere. The important thing is not in which of the mansions you are but that you're in the Father's house. Rastafari!"