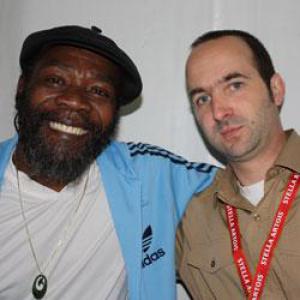 No plans to record your own Inna De Yard album then?
Clinton Fearon: "It's not on the table right now, but it's not something I would rule out.

I was asking that because a couple of years you recorded 'Me And My Guitar', an acoustic album that sounded quite similar to what the Inna De Yard project is about.
Clinton Fearon: Actually, I think that album has to be my best-selling one. It's the one album everyone seems to have heard about. Just because of that I'm thinking of recording a second one."

Take us all the way back to your schooldays for just a moment. You went to school with a man we all knew and loved: Joseph Hill.
Clinton Fearon: "Yeah, we even used to be in the same class. I clearly remember the third grade when our favourite teacher was Miss Christy. Joseph and me, we both loved to draw and Miss Christy kept our drawings on the wall long after we had moved on from her class! (laughs)"

Isn't it kind of strange then that you eventually ended up becoming a member of The Gladiators rather than joining Joseph's Culture?
Clinton Fearon: "You've got a point there, because at one point Joseph and me actually talked about running away to Kingston together (Clinton spent most of his youth in St. Catherine, red.), because that was where the music was happening. Of course we didn't have a clue about how to go about it, so nothing ever happened. Eventually our paths separated; I think Joseph moved to Linstead if I remember correctly. When I finally made it to Kingston myself, I put together a group called The Brothers and while I was still in the middle of that, I got acquainted with The Gladiators. It was at that time, when The Gladiators started playing at Studio One that I ran into Joseph again, who was looking for a job as a session drummer. It was only some time later that he got together with Sonia Pottinger (The most important Jamaican woman involved in music business, Sonia Pottinger was the first female Jamaican record producer and produced artists from the mid 1960s until the mid 1980s. She opened her Tip Top Records Shop in 1965 and started to record musicians in 1966. Throughout the rocksteady and early reggae eras, she became very prolific with hits by The Ethiopians, The Melodians, Ken Boothe, Alton Ellis and Toots & The Maytals, released on her Gay Feet, Tip Top, Rainbow, and High Note labels. In the early 1970s, her work was less prolific, but in 1974 she bought the Treasure Isle label from long time friend Duke Reid shortly before his death, red.) and things started rolling for Culture as well."

You're most commonly known as a bass player, but you only picked up that instrument when you joined The Gladiators.
Clinton Fearon: "It was Albert (Griffiths, red.) who pushed me to pick up the bass. In the early days of The Gladiators, Albert played the bass himself, but I think he quickly found it wasn't too easy to combine that with being a vocalist. I like a lot of instruments, but above all else my passion lies in writing songs, as I consider myself more as a poet than as a musician. When I was still with The Gladiators, that part of me was pushed to the side a bit, so people got to know me simply as being a bass player. That's why the past few years I haven't really played the bass anymore, not even to record my own albums. I was just trying to get away from that label a bit. For my new album ('Mi Deh Yah', red.), I've picked up the bass once more."

How did that feel, to be playing that bass again?
Clinton Fearon: "(laughs) It was a good feeling and I duly intend to keep on playing now, because at the end of the day that instrument has become a part of me. It's my God-given talent, so I would be foolish not to use it. I don't like to be labelled though and that's exactly what started to happen when I was still with The Gladiators. I stuck it out as long as I did, because I loved the music we were playing with that band."

Back in the seventies The Gladiators were one of the bands that were signed by Virgin Records. Did that record deal change a lot for the band?
Clinton Fearon: "It mainly made us realise that what we were doing was actually worthwhile. Band members are often like big kids and getting a record deal like we did can easily go to your head, so that's also something that started manifesting back then. It's really hard to pair the music we do, which basically comes from a spiritual place, with the cold reality of the music business."

When you decided to leave The Gladiators, was that a spur of the moment decision or did you think long and hard on it?
Clinton Fearon: "Well, I had been with The Gladiators for about ten years when I started to notice the togetherness that was there in the beginning had slowly slipped away. With age you get knowledge, so after pondering upon facts for some time I decide it was time to leave. I still consider The Gladiators as my family though."

You then moved to the United States, where you're still living to this day I believe?
Clinton Fearon: "Yes, I moved to Seattle, where I'm still living today. The idea to move permanently to the United States arose back in 1987, when I was doing what would turn out to be my last tour with The Gladiators. After the tour ended, a number of the musicians in the band stayed behind in Seattle do some recordings under the name of The Defenders (the line-up of the band included among others: Clinton Rufus, Winston Carty and Alric Forbes, red.). We travelled back and forth between Jamaica and Seattle, but then one time Clinton Rufus was refused entry to the US. That scared me a bit, because I was also spending large amounts of time in the US, so I figured I wanted to get a green card so I could stay there permanently. Naively, I thought it would take me a year and a half tops, but it ended up being five long years instead."

For quite a while now, you've been playing with your own band, the Boogie Brown Band. Seeing that you're the one writing and composing all the songs, what exactly is the role of the musicians in your band?
Clinton Fearon: "First and foremost they are my backing band, but they also add their own creativity to the music as some of them are established jazz musicians. I respect them and they respect me back. They don't have to play with me if they don't want to, you know."

For the new album you hooked up with the French Makasound label. How did that relationship develop?
Clinton Fearon: "That happened through Jerome (Baudin aka. Rootsman G, red.) and the collaboration I did with a French band called Tu Shung Peng (also signed to Makasound, red)."

One of the songs on 'Mi Deh Yah' is called 'Jamaica'. You've been living in Seattle now for quite a while; do you still often go back?
Clinton Fearon: "Oh yes, I go back all the time, although maybe not as much as I wish though, but I still got a sister over there and my eldest daughter lives on the island as well. Flying is expensive though, and each time you go home, you have to go with a little money in your pocket, so sometimes it's a money thing. Right now I'm due to go there again because I have a granddaughter who'll turn two this year, but whom I've never met yet!"

Another track on the album is called 'Better Days'. You must be positively inclined thinking so, with all that's going on in the world right now.
Clinton Fearon: "You know, it's we who have to make that change happen. If we could all just come together and strive for the greater good, things will change! It's a energy thing. If we only continue to focus on the negative, things will continue to go from bad to worse. Humanity is resilient and I just know we'll bounce back at one stage. Have you noticed that whenever there's a big tragedy somewhere, people all of a sudden start to come together? We should try to carry that kind of solidarity through into the rest of our lives as well. Because a lot of people are not really doing what they would really love to be doing, they aren't feeling satisfied and as a result of that they are starting to ventilate these feelings of disgruntlement on other persons. I think it's very important to focus on what you really love, because it fulfils a certain spiritual need inside of you. We pay way too little attention to our spiritual side in the West. You need to take control of your own spirit and the way to do that is to set that side of your personality free. Just let it out!"