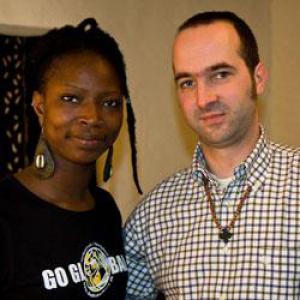 Dobet, on your latest album, 'Na Afriki', you dedicated one of the songs to an organisation called Ki-Yi M'bock. That name will probably not ring a bell with most people, so could you tell us a little more about it?
Dobet Gnahoré: "Ki-Yi M'bock was founded in 1985 by Werewere Liking, a writer and painter from Cameroun. She, as so many African women, is a real iron lady, the difference being she has managed to step out of the shadow most other African women stay trapped in their whole lives. She created a pan-African village called Ki-Yi M'bock, which means "the ultimate knowledge of the universe". It's a place were young people can get an artistic education and become dancers, singers or musicians. The village is completely autonomous and does not depend on subsidies from the state. All expenses are covered by organising events where the students can display their talents. More than a village, Ki-Yi M'bock is really like a large family group of about eighty people. Over the years the organisation has really been a source of support for numerous Ivorian and West-African artists."

You perform in various languages, some of which you don't even speak I believe?
Dobet Gnahoré: "I joined the Ki-Yi M'bock village at the age of twelve and even at that age I already used different languages in my music. From the very beginning, I have used languages that I don't necessarily speak myself, but I've always felt very strongly about promoting different African languages. These days, I travel the world and everywhere I go I meet artists who want to write songs in English or French, but because of my Pan-African formation, I see it as my duty to defend the different African tongues. It's also a bit like travelling without needing a visa. Once every so often, I even get asked if commercial motivations aren't involved, but that really goes against my interpretations of Pan-Africanism. It's quite a job you know. For ‘Na Afriki' I have used not less than seven languages. First, you have to write a song, which subsequently has to be translated and once that is completed I still have to master the right pronunciation."

You're from Ivory Coast, a country that's also home to reggae artists like Alpha Blondy and Tiken Jah Fakoly. Did that music or its philosophy influence you in any way?
Dobet Gnahoré: "Yes, absolutely, even though I have to admit I don't really wear my dreads because I'm a Rastafarian. On my debut album ('Ano Neko', red.), I included a tune called 'Youné' which was very reggae-orientated. I love that music a lot, but I'm influenced by a lot of genres really. I'm learning to play the guitar at the moment and the easiest rhythms to play are reggae, so I use them a lot."

On scene you've built yourself a reputation as a dancer as well as as a singer. Do you consider both of equal importance?
Dobet Gnahoré: "Yes, dance is a very communicative medium on stage, because it adds a visual dimension. In Africa, everybody dances and I find it an excellent means to set your worries aside for just a moment. I was already dancing way before I started my career as a singer."

In 'Djiguene' you talk about the African women, who, in your opinion, hold the key to the future of the continent.
Dobet Gnahoré: "Correct. Traditional society allowed women a fair amount of liberty and responsibility, but the urge to westernise our society, has turned that around and that's a real shame. Women should be allowed to express themselves and if that means also playing a role in politics, then why not? It's also the women who take care of the children, giving them the strength and hope to face the future. With the song I wanted to pay tribute to my mother and to all the strong African women out there."

'Mousso Tilou' is a track in which you denounce polygamy, although the song seems to be more about the inequalities that system entrails.
Dobet Gnahoré: "Yes, that's exactly it. I'm really denouncing men abusing an old tradition just to be able to have sex with more than one woman. If they want to give men the right to have more than one wife, why not give women the same privilege? Above all it's a song about inequality."

The album also contains two tracks ('Jho Avido' and 'Inyembezi Zam', red.) dealing with death in one way or the other. Where does your fascination with that subject have its roots?
Dobet Gnahoré: "(laughs) I agree that might seem a little bizarre, but you have to realize in Africa life and death are much entwined. We tend to surround ourselves with memories of our loved ones that have passed on. To me, these songs are just a means to express my respects to the departed. Life is a gift, but it inevitably ends in death. I already included a song on that subject on my first album and I will continue the theme on my next album. It's a subject that seems to follow me around. It even turns up in my dreams quite regularly. I guess my departed relatives are watching over me, guiding me true life so to speak."

You're signed to the Belgian Contre Jour label and it's also in this country that your international career started. How would you describe your relationship with Belgium?
Dobet Gnahoré: "Every time I play here I draw a big crowd. The people here are very open-minded and seem to be true music lovers. It's just a pity this country isn't a bit bigger so I could play here more often! (laughs)"