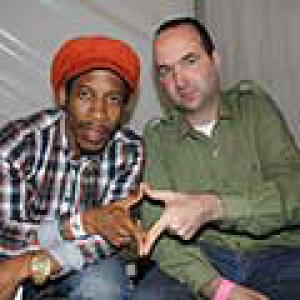 Exile, a bit like Kabaka Pyramid, you started out in hip-hop rather than in reggae.
Exile Di Brave: "Well, I was born in the eighties and grew up in the nineties. Back then I was really influenced by American music and I felt a connection to hip-hop because it told the story of inner-city youths like me. I was really into artists like NAS, Tupac but also Afrika Bambaataa or conscious artists like Dead Prez and Common, and I definitely have to mention OutKast."

What exactly made you switch to reggae?
Exile Di Brave: "At one point I was in a rap-group with two other brethren, but then I started college and our ways kind of got separated. At the same time you had a resurgence of one drop music, with a number of the artists that were gaining popularity coming from the Portmore area where I'm also from. I started checking out their vibes and really got into the conscious message of the music. It wasn't anything planned, just a natural progression in my musical evolution."

You're known as a do-it-yourselfer. Why is your independence so important to you?
Exile Di Brave: "It's all about looking after oneself without becoming selfish. Of course it's also about having creative control over the music you turn out. But once again it wasn't really anything I planned in advance; I just found myself in a situation where it seemed the best path for me to follow. Instead of resigning myself to the fact I was from the ghetto and my options would be limited, I considered myself to be a rebel with a cause and broke the mold so to speak. After all, self-sufficiency is one of the basic principle teachings of Rastafari and Garveyism; all I did was to try to put theory into practice! (laughs) It doesn't mean you do everything on your own though, it's just making use of your talents and applying them to the best of your abilities."

Your label, EDB Entertainment, quickly evolved into a whole movement.
Exile Di Brave: "I see EDB Entertainment as a sort of quality label, so the EDB doesn't just stand for Exile Di Brave but also for Ever Di Best. When I started the label, I did it in partnership with Philip 'Scaley Blacks' Williams, him building the riddims and me voicing the tracks. Then my brethren Jahkime joined us - I think that was around the time I finished the 'The Calling' album (2013, red.) - followed by Kazam Davis and that's how the whole thing kept expanding. We all knew each other already from way back when and apparently this was the right time for us to join forces and move forward together."

'The Journey Begins', the title of your second album, sounds a bit like that of a debut album, but it's not, so what is this new journey that was starting for you?
Exile Di Brave: "Well, my previous album was called 'The Calling', so my thinking was that if you get a calling, soon after your journey begins. 'The Journey Begins' is also the musical continuation of 'The Calling'; I'm someone who records pretty much continuously until I end up with enough songs to make up another album, so I started recording the songs that make up 'The Journey Begins', right after the release of my previous long player. Another journey that began with this album is the fact that I started working with an actual band instead of voicing over computer generated riddims. Finally we also started dealing with distribution and everything that comes with that. 'The Calling' was just released digitally, but 'The Journey' begins is also available on CD, so we had to make sure to get it out there."

Rather than voicing over prerecorded riddims, for 'The Journey Begins' you took to the studio with live musicians.
Exile Di Brave: "I my opinion, you can't really present yourself as an artist or a singer if you want without knowing how the music is made. There's nothing wrong with voicing a tune over a riddim you get sent, but being surrounded by actual musicians and building a song from scratch is a whole different experience. It's that same difference that you can also find between doing a sound system set and playing a concert with a live band. The resurgence of vinyl is in a similar vein; it's all about the feel of the music."

You're one of the ambassadors for 'Help Jamaica!', how did you get involved with the project?
Exile Di Brave: "For me it's all about giving the youths the opportunities they deserve, and since Help Jamaica! is an organization that has a similar goal, I have no problem putting my shoulders behind that. Anyone who wants to do something similar has my full support as well. When I shot the video for 'Hungry', I had people of all colors and creeds holding up the Help Jamaica! sign. The idea behind that was Jamaica's motto: "Out of many one people!". For the people who don't know what Help Jamaica! does: they fund and establish school libraries, which in turn encourages the youths to read. It's only by reading that you can also learn and educate yourself. Just handing out money doesn't serve anyone, but from books you can gather knowledge and once you have the knowledge to do certain things, all the rest will follow. I'm a ghetto youth myself, so I know how important a good education is and I definitely consider myself to be an activist and an advocate for education. His Majesty said it as well, you know: "The key for the betterment and completeness of modern living is education."; knowledge and understanding make it easier to get along with others in this world that's getting smaller by the day!"