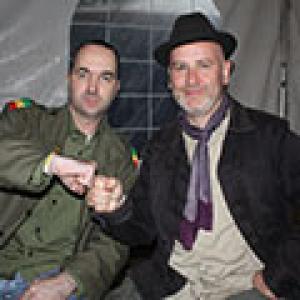 Stepper, reggae fanatics will undoubtedly know you as an inspired sax player, but has that always been your instrument of choice?
Guillaume 'Stepper' Briard: "Before I started playing reggae and ska, I really took the time to get to know the history behind the music and Jamaican culture in general. I took up playing music rather late in life and am completely self-taught. I started out dabbling around with the guitar a bit, but I quickly noticed there was a lack of good horn players, so I switched to the saxophone."

You became more of a household name when you started playing with Homegrown Band.
Guillaume 'Stepper' Briard: "I think it was slightly earlier than that. I started out playing with various smaller bands, like Baobab for example, but I guess my career really changed gears when I accompanied Pierpoljak to Jamaica to do some recordings there. In Jamaica I had the chance to link up with several local musicians and artists, one of whom, Horace Andy, asked me if I would be interested in putting together a backing band to accompany him during his European tours. I told him: "Sure!", called a few befriended musicians and that's how Homegrown Band got started."

Apart from playing with Homegrown Band, you've been a valued member of Sly & Robbie's Taxi Gang for several years now. What's the difference for you as a musician when playing with these two bands?
Guillaume 'Stepper' Briard: "To be honest, I wouldn't really know! (laughs) I've been a member of the Taxi Gang for ten years now, replacing Dean Fraser when he started touring with Luciano. Being offered a spot in a band of that caliber to me was like a dream come through, so turning the offer down was never really an option. I'm still picking up things whenever I play with them, but apart from that, there isn't all that big a difference between playing with Sly & Robbie, Homegrown Band or even Jamaica All Stars, which I was also part of for a while."

Daryl Thompson, the iconic Taxi Gang guitarist, passed away not too long ago. How will you remember him?
Guillaume 'Stepper' Briard: "He was a genius, both as a guitarist and a person, and a very cultivated individual. A lesser known fact about him was that he was fluent in French. He descended from a family of jazzmen; his father Lucky Thompson (Eli 'Lucky' Thompson, June 16, 1924 - July 30, 2005, was an American jazz tenor and soprano saxophonist. While John Coltrane usually receives the most credit for bringing the soprano saxophone out of obsolescence in the early 1960s, Thompson actually embraced the instrument much earlier, red.) was a famous jazz musician in the nineteen forties and fifties and ended up playing in Paris for a while. Darryl accompanied his father and spent part of his childhood in France. He was a very sensitive and generous man and even though reggae music wasn't really his musical heritage, he played an important role in the development and propagation of the genre. We definitely miss his presence in the band."

In 2013 you released your debut solo effort 'Sly & Robbie present Stepper Takes The Taxi'; a dream come true?
Guillaume 'Stepper' Briard: "Oh, absolutely! In fact it were Sly & Robbie who convinced me to do a solo album. For my own enjoyment I had recorded an instrumental version of the Baltimore riddim and when I had Sly listen to the track he was immediately enthused and told me it wouldn't be a bad idea to do a complete album. Sly & Robbie gave me free range in their vast Taxi catalogue. I ended up using a number of classic Taxi riddims, supplemented with instrumental versions of tracks I'd recorded for various albums I'd worked on over the years. To me recording 'Sly & Robbie present Stepper Takes The Taxi' was primarily a bit of self-indulging fun, but I must admit seeing the album get the great reception it did, was certainly very gratifying."

Having had the chance to work with a whole host of reggae legends, many a reggae fan would probably say you are living the dream. Do you still have a wish list of people you'd like to work with regardless?
Guillaume 'Stepper' Briard: "It's true that I've been lucky enough to be able to work with several reggae legends. There are others I would have loved to work with, but who sadly passed away before my time; people like Dennis Brown or Delroy Wilson for example. A collaboration that manifested recently was with Johnny Osbourne, an artist who was on my wish list for the longest time!"