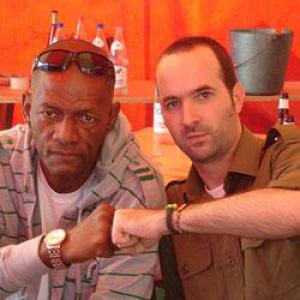 Horace, for starters, could you tell us how and when you took your first steps in the music business?
Horace Martin: "I started out as a singer at the tender age of twelve. My work with Negus Roots dates from the early eighties, but my career started way earlier with songs like 'Africa Is Calling' (1981, red.) and 'Jah Jah Children' (1975, red.). In these early days I worked with Trevor Elliott for his Musical Ambassador label, but I also did some tunes for Junjo Lawes ('Just Call Me', red.) and Coxsone Dodd ('Gimme Fe Me Corn', red.)."

How did you originally hook up with Robert Palmer from Negus Roots?
Horace Martin: "I was hanging out in Waterhouse when Robert came up to me and told me he really liked my voice. At that time he was also working with Lacksley Castell. He passed away at a very young age, because he was suffering some kind of illness, but I'm happy Negus Roots has now re-released the material he recorded for them. I did a number of tunes on the same riddims as Lacksley."

At one stage you moved to Canada, where you're still living to this date. What was the reason for that move?
Horace Martin: "I've always found that as an entertainer it's much easier to live in a big city, because in these places you get far less hassle. In many ways Jamaica is still like a third world country, you know. I still travel back and forth to the island often though, as I like to keep in touch with my roots. Last year I went back and organised a sort of anniversary party called "The Return Of Horace Martin part 1". That was a great success so I'm going back in October to organise it for a second time."

You're MySpace page mentioned your plans to play a part in an upcoming motion picture ("Border Klash") based on the book "Dread Culture" ("Dread Culture: A Rastawoman's Story", Masani Montague, Sister Vision Press, 1995, red.).
Horace Martin: "Yes, we shot some scenes with Ninjaman already, but seen as he's incarcerated right now (Desmond 'Ninjaman' Ballentine was arrested and charged with murder, conspiracy to murder, shooting with intent, and illegal possession of a firearm, in March 2009. According to the Jamaica Star, the well-known dancehall DJ has been linked to the murder of 20-year-old Robert Johnson, red.), the project is kind of on hold. I know they are looking for someone else to take his place. I play the role of a rude boy called Johnny, a bad boy shooting up the place! (laughs)"

I know you're also a family man. Are any of your children inclined to follow in your footsteps?
Horace Martin: "Well, I've seen my son (Horace Jr., red.) do a little engineering work and singing on the computer and I've been watching him with one eye from a distance. I hope he will take it further though. My daughter (Dhaima, red.) has a nice voice, but she's very shy. I don't think she's ready for it yet, but she might take it up later, you never know."

One of the first songs you ever recorded was a tune called 'Beautiful Dream' (1976, red.).
Horace Martin: "Yeah, I recorded that track in the late seventies for Big Ben and together with 'Jah Jah Children' that was the song that made my name in the music business."

In hindsight, did that "beautiful dream" come true for you?
Horace Martin: "Yeah man, it's still coming true every day! It's even more coming true these days than it was back in the day, because back then you often got exploited as a singer. Now, I'm the type of guy who doesn't move if he's not getting his money, so I passed up a lot of so-called opportunities. My voice is my talent and my talent is what makes me survive, so I need to get paid for that!"