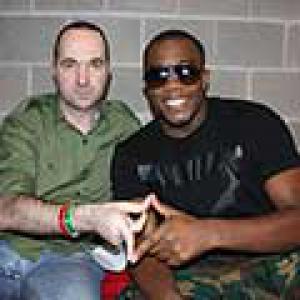 Jemere, with your first name meaning "wish come true", I can't but wonder: as the third generation in the Morgan clan to opt for a career in the music business, would you say your wish has come true?
Jemere Morgan: "I guess you could say this was sort of meant to be, yes. I've always wished to be like my father, so in that perspective it's certainly a wish come true. I accompanied him on many of Morgan Heritage's tours and that's how my fascination with becoming a performer started. The fact I can now open for them I consider as nothing less than a blessing."

Being part of the Morgan clan is a bit like being a Marley. Would you consider your family name a blessing or a curse?
Jemere Morgan: "Of course it's a blessing, but that being said, I rather try to let my music speak for itself than build my fame on the name I was born with. I'm still a youth myself, so my music is intended primarily at a younger audience, telling them to enjoy their youth, have fun while they still can and enjoy life in general."

Apparently your very first song, 'First Kiss', came to you when you were in the shower?
Jemere Morgan: "I see you did your research! (laughs) I recorded that song in 2011 and still remember singing it to my father one day. You have to know that up until that time I was a rapper rather than a singer. When he heard my singing voice, he insisted I focus on that instead of rapping and as you just mentioned, the lyrics came to me when I was in the shower."

Do you prefer to write and produce your own music?
Jemere Morgan: "Well, I've worked with a whole range of producers already, people like Rellee (Stanley 'Rellee' Hayden, A-Team Music, red.) and Rif Raf (Llamar 'Rif Raf' Brown, red.) and Unga (Wayne 'Unga' Thompson, red.) from Notice Production, and they've all managed to bring elements out of me that I didn't even know were there. Where lyrics are concerned I do prefer to write and perform my own work and the same applies to recording my vocals; I'm a bit of a perfectionist and often I record myself over and over again until I get it just right."

The first few songs you did were all love-inspired tunes. Is that the sort of thing we should expect from you in the future as well?
Jemere Morgan: "I'm working on my debut EP right now, which will be titled 'I Am Jemere' and I guess if you're looking for a red thread in the songs that will be on the track list, I would have to say that they are all about celebrating life. That's something you can do both with a conscious track telling the youths to have faith in Jah as with a more poppy love tune like 'Neighborhood Girl', so the track list of the EP will definitely contain a combination of both."

Is it still important for you to be able to release your upcoming EP on physical format, or does a digital download suffice?
Jemere Morgan: "In my experience, if you want your music to be played by deejays or radio hosts, it's still best to make sure they get a physical copy. It's like handing them a calling card establishing a personal relationship between two parties. The chance an album or EP in physical form will stay with you for a long time is also much greater than with a digital download which can be deleted at the click of a mouse."

Would it be fair to say it was 'Neighborhood Girl' which took your career to an international level?
Jemere Morgan: "Absolutely! Concerning that song, I absolutely have to big up my producer Rellee. He called me up around 5 o'clock in the morning and told me he had this John Holt tune ('Sweetie Come Brush Me', red.) he had been sitting on for years and hadn't found a singer he thought it would fit yet. Thirty minutes later I already sent back a first draft and the rest is history. It's been doing great all over the place."

You being a Morgan, I just have to ask if Rastafari has had as profound an influence on you as it had on your father and his brothers and sisters?
Jemere Morgan: "Rastafari has always been there, yes. On Saturdays we always hold the Sabbath and we try to live by His Majesty's teachings. To me it's all about having faith in Jah and following the path he lays out for you."

Musically, you've already been compared to artists like Romain Virgo or Sean Kingston, but who would you say were your musical examples?
Jemere Morgan: "In all honesty I would have to say my uncle Peetah has been my biggest influence. I listen to his voice on a daily basis and can only hope I will aspire to his level one day. Some people have already told me I sound somewhat like him, so I'm not giving up hope yet. Apart from that, I listen to a whole variety of artists and styles, people like Chris Brown, Chronixx and Romain Virgo."