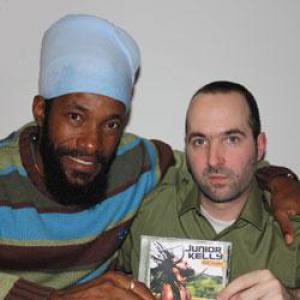 Junior, you're on tour promoting your new album 'Red Pond'. What does that title refer to?
Junior Kelly: "Red Pond is a name they call the community I grew up in, Frazer's Content (Spanish Town, St. Catherine, red.). The reason why I chose to name the album this way is because it's a symbol of my triumph over adversity. I grew up in a rural ghetto community, and it's very hard to be ambitious in such surroundings because there are many negative forces at work who'd rather keep you down, but I refused to give in to that status quo and kept on pursuing my career in music. By calling the album 'Red Pond' I wanted to show the negative elements in my community that there are still things worth fighting for."

Many artists from your generation have been at the centre of controversy at one point or the other, but you've always seemed to steer away from that.
Junior Kelly: "(laughs) You're saying I try to keep my nose clean! I think it's a matter of principle, of sticking to what you hold dear. I don't have many friends and that's not because I'm anti-social or anything. I grew up watching my father go to work at the factory every day for over forty years. After work he always came straight home. One day I asked him: "Daddy, why don't you ever have your friends come over?" and he answered: "My family members are my friends!" Through the course of my life that statement has always stayed with me. My brethren Desmond Brown aka. Skeng D, who's always with me on tour, is basically my conscience. We grew up together and I consider him to be family. The industry is full of people only looking out for themselves and influencing artist to do the wrong things. If you can not handle poverty, you won't be able to deal with richness either. A lot of these artists start to make some money after a while and greed often steers them away from God and spirituality. Because they have everything they want, they are convinced they've no longer any need for God in their lives and that's when things like guns, drugs and violence start slipping into their careers. When you drink or do drugs, you'll end up doing things you don't even remember afterwards and you might even find yourself ended up in jail. I've always tried to stay clear of all that. For me there's no separation between the lyrics I write, the songs I sing and the life I live. I try to be true not only to myself but also to the people that listen to my music. I don't want to disappoint my audience, and even more so, I don't want to disappoint myself and I don't need controversy to sell my music either."

I found a quote of yours where you say, in regard to the producers you work with: "I listen to your music and when it moves me then we can work something out." Does the same rule apply in your choice of artists you want to voice a duet with?
Junior Kelly: "Music is a living entity that makes you develop a certain chemistry with someone else. You have your personality and the next person has his, but there's a certain magic that happens when two musically inclined individuals decide to get together to create something together. Whit that quote I meant that money is not my primary motivator; if your music is good I'm sure we can work something out. Often times you don't even have to reason verbally, you can just sense a certain feeling radiating from another person; it's like God saying to you: "Yes, this is a good person for you to work with." When I start out a music project I never want to discuss the money factor, because for me that would interfere in a negative way with my creative process. If you want to talk money, we can do it after we finish the music. I am my own worst critic and I pride myself on good quality work, so that's also something I look for in the people I work with. The music I do is spiritual music, so the energy, the vibe has to be right. I like to align myself with people who believe in the music. I'm very sure that without music a lot more crazy people would be roaming the streets and I'd possibly be one of them, because I have a saying: "The thing that's keeping me sane is the same thing that's driving me crazy and that's music!""

What's your position on the whole dub plate business? These days cutting dub plates seems to have become all about the money.
Junior Kelly: "It's like basketball, baseball or football; these days it's more about the money than about the skill, the heart and the love for the sport. It's a shame but that's just way it is. I often get approached by sound systems asking me to do a dub plate and I don't feel good pressuring them for huge amounts of money because often times these guys are nothing more than college kids running a little sound system just because they love the music. Pressuring them for money is killing the inspiration of the future generation. You have to try to look at things long term and every aspect of the music is equally important and the sound systems are the ones pushing your music forward in the dances. Often times I will just do a dub plate for free or for some gas money for my car. We need each other to keep the music alive."

On the album there's a track called 'Slackness'. What constitutes slackness for Junior Kelly?
Junior Kelly: "Slackness is, for example, when a politician steps up to the podium, makes a whole lot of promises, but as soon as he or she rises to power doesn't deliver on them. Slackness is when child predators keep getting nothing more than a slap on the wrist and keep going out on the streets ravaging our children, traumatising them for the rest of their lives. Slackness is when deejays or producers know the stuff they are putting out is rubbish and damaging our society and our kids' minds, but do it anyway because of the financial gain. That is slackness to me."

You took your stage name really as a tribute to your brother (Jim Kelly, red.) who was brutally gunned down. Remembering him, what are the first things that spring to mind?
Junior Kelly: "His love for his mother and father, his love for his little brother and his love for people in general. My brother worked with the Killamanjaro soundsystem and he used to support a lot of the kids in our neighbourhood whose parents weren't able to do so. He used to leave home on Thursday and not come home before Monday as he was working all the time moving from parish to parish. What I used to love is that whenever he came home he used to come into my room to sit with me and talk. I've often said it would have been better if we had traded places, because I feel his heart was even purer than mine. He was a lover of people and his biggest let-down were people as well. A lot of things that happened to me in the (music) industry would have never happened if he had been there to guide me, but unfortunately they robbed me of him..."

In 2001 you had a near-death experience when you were involved in a serious car accident. Did that experience change your outlook on life or the way you dealt with your career?
Junior Kelly: "I did change my outlook on life yes. It's funny because we were just talking about dub plates... This youth from Waterhouse who was in the sound system business asked me to do a couple of dub plates for him. He asked me to do four, but I eventually ended up doing eight dub plates in total and I just gave them to him for free. When I left the studio and drove home, I was hit by a crazy taxi driver who ran into my car. The thing was, this accident happened right near this youth's house. Immediately after the crash, people started gathering around my car and some even started stripping it for parts with me still in it, but when he saw what had happened he intervened and told those people to back off. The two things in this story that changed my outlook on life were, firstly, that you should always do good because it will come right back at you - it cemented my belief in doing the right thing - and, secondly, it strengthened my belief in life after death. This body is just a shell or a vessel that contains my spirit on this earth. From that moment onwards I'm not afraid of death anymore. Our existence here on earth is but a bus stop in the route that is our existence and it's what you do at that bus stop that determines where you're going to end up. It made me a firm believer in humanity and kindness."

A nice bridge to my next question. You visited Haiti a couple of years ago. In the mean time the country has been struck by one of the biggest earthquake disasters of recent times. Are you in any way involved in the actions set up to rebuild the country?
Junior Kelly: "Yes, of course, the Haitians are our neighbours. Together with a host of other artists, people like Beres Hammond and Marcia Griffiths, I recorded a song called 'Listen 2 The Call'. I was happy to be part of that because, as you just said, I've been to Haiti and I've never seen so much hospitality in my life! Those people have to make do with what they have - for example the electricity over there only comes on a couple of hours a day - but still there are parties everywhere every night. They just pick up the acoustic instruments they have and start playing. In that short time I stayed there, I made some good friends, so it's only natural I'm also part of the rebuilding process."