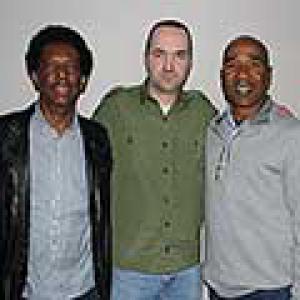 Keith, Tex, apparently you guys met one day while playing a game of soccer?
Keith Barrington Rowe: "That's true yes, and I'm sure Tex will probably try to convince you of the fact he taught me how to play the game."
Texas 'Tex' Dixon: "Absolutely! I taught him everything he knows, starting with which was his right foot and which his left! (laughs)"
Keith: "Don't believe a word he says, I tell you! (laughs) On a more serious note; back in the days we both used to enjoy playing a game of soccer. We met on the playing field one day and quickly discovered we also shared a passion for music, eventually resulting in the two of us hooking up to become a musical duo."

What kind of singing experience did you guys have before becoming the duo we now all know and love?
Keith: "As so many Jamaicans I sang in church, my father being a pastor, that was even more than logical. At the time I used to listen to Delroy Wilson a lot and was convinced I could give that a go as well."
Tex: "My experience is somewhat different. I had several uncles who would play music by classic American singers like Sam Cooke and Nat King Cole all the time and, even though I used to hum along to their songs often, I never really had aspirations to become a singer. When I was going to primary school in a place called Brown's Town (Saint Ann, Jamaica, red.) I participated in a singing contest and to my surprise came second. Not much later I heard Keith and some other guys were trying to mount a group and that sparked my interest. When we started auditioning, there were five of us, but after a number of disappointing try-outs, only Keith and I persevered."
Keith: "We never had the intention to become a duo, but that's just how things ended up. We harmonized pretty well together"

Production-wise you guys worked almost exclusively with Derrick Harriott, but not because he was your first choice?
Keith: "We tried a number of other places first, yes. Among others, we went to Prince Buster and Duke Reid and, even though they never outwardly refused us, they all basically told us we needed more experience. Derrick Harriott was an up-and-coming producer at the time and as a singer he was doing the kind of music we also wanted to record."
Tex: "The day we met Derrick, we actually were in downtown Kingston to try and audition for Beverly's. Unfortunately, or fortunately, depending on the way you want to look at it, they were closed that day, so to keep from having made a wasted trip we made a last-minute decision to drop by Derrick's store on King Street. When we got there, he wasn't at the premises though and we were met by a girl called Sherry. She was prepared to listen to the stuff we had brought with us on tape and was impressed with what she heard. She urged us to hang around until Derrick got back and when he eventually returned he listened to our tape, told us we sounded great and that he wanted to record us straight away."
Keith: "We already recorded our first tunes for him only three days after that first meeting, 'Tonight' being the very first song we voiced."

At Derrick Harriott's you worked with famed rocksteady guitarist Lynn Taitt. How instrumental would you say have his contributions to your music been?
Keith: "Lynn Taitt was without a doubt one of the most significant musician of that short-lived era. All the prominent guitar parts on our songs, and those of many others, were done by Lynn Taitt. During recording he would take the task of band leader on his shoulders, instructing the different musicians, setting the pace and arranging the songs. In those days overdubbing didn't exist yet and you only had live recording sessions, where everything had to sound just right."
Tex: "Lynn's guitar riffs were also something fresh and new at the time. You only had to hear that first guitar riff of 'Stop That Train' to know it was Lynn Taitt. He definitely defined our music."

Tex, what happened to you after you migrated to Canada?
Tex: "Well, for starters, Canada wasn't as popular a migration destination for Jamaicans as the US, so when I arrived there, reality quickly sank in. I had gotten married and had to support a family, so I had to find a decent job as quickly as possible. I had a background in accounting but not being Canadian, it wasn't easy. I eventually managed to get a job with the Ministry of Transportation and over the years I became a license issuing clerk. I ended up staying there for over twenty years and it earned me a nice pension! (laughs)"

Keith, after migrating to US, you joined the military. Was that a conscious decision on your part?
Keith: "Oh definitely, so, yes. When I arrived in New York I first played with various bands for a while, playing with people like Lester Sterling and Ron Wilson, but the music business is very uncertain and that started getting to me at one point as I was never guaranteed a steady income. So when I heard an advertisement on the radio one day saying something in the lines of: "See the world, join the army!", I decided to enlist and I have to say I've never regretted it once. Back then the Vietnam War was still going on, so you could say it was definitely a life-changing decision."

Were you still involved in music while you were in the military?
Keith: "Yes, that was in the period when I was stationed in Germany, at Fliegerhorst near Hanau. I was part of a band that played the military circuit; every weekend we would play in another base."

In terms of royalties, like so many Jamaican artists of that era, you guys were kind of screwed over by Derrick Harriot. Have you managed to sort something out yet?
Keith: "Not really, no. We went down to Jamaica and sat down with Derrick to talk to him man to man, but still nothing came of it. I got very angry over the issue, but Tex managed to persuade me to let it go. There's more to life than money. I still feel we're entitled to part of Derrick’s earnings, but we've been given a second chance now and are able to perform our music to a whole new generation of people, so the sky is the limit really!"

You just released 'Redux', an album containing all your classics, but do you guys have any plans to head back into the studio as well?
Keith: "We're actually in the process of recording a new album ('Just Passing Through', was released on the Kebar Music label in March of 2015, red.). We've already recorded several tracks and the finished album should turn out to be a heavy rocksteady set, because that's what we're all about. I still feel the rocksteady era was a period of excellence in Jamaican music history and we want to keep that vibe alive."