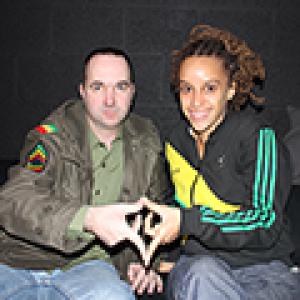 Kelissa, what immediately sets you apart from most other artists of your generation is the fact that you've lived in Africa for quite a while.
Kelissa: "Yes, when I was fifteen years old my mom and dad took us with them to Tanzania. We lived there for about three years."

Did you get the chance to visit Ethiopia as well?
Kelissa: "Well actually, that's where my parents moved after they left Tanzania. They stayed for about four years. At that time I was already enrolled in college in Los Angeles (Whittier College, red.), but I travelled to Ethiopia several times to visit them. It's just such a spiritual place and to be able to visit the place you've always heard refer to in countless reggae songs was a very humbling experience for me. Ethiopia is quite different from most other African countries, from the languages they speak to their relationship with religion; even the physical traits of the Ethiopian people are quite different from other African peoples. Because I couldn't really grasp the language, it made my experiences over there even more spiritual and meditative. As a Rastafarian woman, visiting Ethiopia was like coming full circle to me. And I simply love Ethiopian food! (laughs) I even had the chance to experience West-African culture as well, as I spent one semester studying in Ghana."

It's often said that islanders have a somewhat different perspective on the world. Guessing that's also true for Jamaicans, would you say the fact you've had the chance to travel and even live abroad makes your outlook on the world slightly different from most other Jamaicans?
Kelissa: "I think that's only natural. When you travel you're exposed to different cultures, different languages and even music you've never heard before. So, yes, I do believe my outlook on the world is different from that of most Jamaicans, but I see that as something positive, because I consider it part of my mission to enlighten people. I don't want to hoard the knowledge I've gained from my travels but share them through my music and art."

Africa being a very musical continent, do you ever incorporate some of the musical influences you've picked up over there into your own music?
Kelissa: "Most definitely, and I even do it without thinking about it. My musical career even started when I was still living in Africa. Both of my parents are musicians as well and I didn't really start exploring my own musical talent until I was living in Tanzania and joined the high school choir. When I started taking things more serious, I started experimenting with my brother (Keznamdi, red.) in the studio. To return to your question, I find that I gravitate a lot towards percussive music of which there's no shortage in Africa of course. (laughs)."

You just mentioned your parents being musicians as well. In fact they were part of a band called Chakula.
Kelissa: "They were around when reggae was being digitalized in the early nineteen eighties. Chakula never really became a mainstream band though, I think mainly because they were still doing very soulful roots reggae in an era when early dancehall was beginning to take Jamaica by storm. In any case it's the music I listened to growing up, so it influenced me a lot. They're still active, recording and performing and I'm sure that with my brother and me now stepping into their footsteps it will bring Chakula in the spotlights again as well, and perhaps one day we can all perform on stage together, who knows?"

Apart from your parents, who are some of your other musical influences?
Kelissa: "Well, I listen to a very diverse range of music, so I couldn't even begin listing names as I could go on forever! (laughs) To give you some early references: even before we moved to Africa, my parents would already be playing things like Fela Kuti or Sade, and growing up I started listening to hip-hop and r&b."

How did you originally link up with Chronixx?
Kelissa: "The link with Chronixx started when I'd written a song I wanted him to voice with me. We went into the studio, recorded the tune, and even though it was never released, from there our relationship developed. Chronixx then coproduced my debut EP 'Rebel In Disguise' and we started performing together. It's such a blessing to be able to tour with him and Zincfence Redemption now, because this was something I could only dream about at one stage, and now it's become a reality. Being able to work with him just encourages me to keep on dreaming!"

A criticism often made about Rastafarianism is that it's male dominated and patriarchal. As a young Rasta woman what's your perspective on that?
Kelissa: "Well, for starters I don't think that's something that only applies to Rastafarianism. We still live in a very patriarchal world! I've just tried to create a balance for myself. I'm not here to compete with men and I certainly wouldn't describe myself as overly feminist, but at the same time as women we have to stand up for our rights. I try to change things in my own way by trying to uplift the minds of the youths to persuade them to try and make it a more equal and balanced place. Women deserve respect, as it are they who bring life into this world, and that's a very divine experience. In my music I try not to stress the subject too much though, as I want to keep things positive and pure."

You're vegan; is it difficult to uphold that lifestyle while being on tour?
Kelissa: "I grew up in a Rastafarian household and my parents upheld the ital lifestyle, so we would only eat fresh fish and weren't allowed certain other things. Growing up and travelling the world I felt the need to take it a step further even, so I became vegan. It's just about respecting life in general. Being on tour quickly makes you realize that only a very small portion of the world adheres to these same principles. It's certainly not always easy to find the right food, but sometimes you get lucky and find a vegan restaurant, and whenever we have the opportunity and time we try to cook our own food. Again, it's not easy, but I like to think of touring as a period of fasting. I'm on a journey, with a mission to complete, so we can't be spending time thinking about ourselves too much. I just try to take it day by day and city by city."