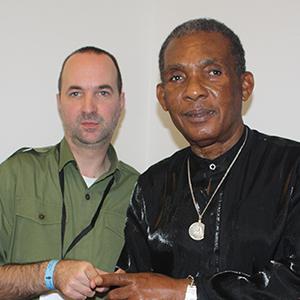 Ken, how exactly did you get involved with the whole Inna De Yard project?
Ken Boothe: "For me it made sense, you know, as that was how we started out back in the day, writing our songs and harmonizing in our respective yards. The thing that's different is that for this project we also recorded in the open air. For me personally, it's the nyahbinghi drums that make the big difference. I really got involved when Winston (McAnuff, red.) introduced me to Romain (Germa, red.) of Chapter Two Records. I'm thankful, because for me it's like breaking new ground. I'm reaching a whole new audience with my music now; people who don't necessarily listen to reggae. I'm enjoying all the attention I'm getting because of this release, but I stay humble; I've never been a star, I'm an entertainer and before that I'm just another human being and I know the people buying and appreciating my music are what has to come first, regardless from race, class or creed. In fact music is one of the best means to transcend those barriers as it's a universal language everyone can understand and relate to. Apart for the 'Inna De Yard' project, I'm also working on a children's album as that was something I always wanted to do, because I believe children are often overlooked when it comes to music. It will consist of well-known children's songs that are known internationally like 'Jesus Loves The Little Children' or 'Row, Row, Row Your Boat'."

As a singer, did you feel there was a difference between recording outside or in a studio setting?
Ken Boothe: "All I can say is that the engineer in charge of this project (Laurent Jaïs, red.) did an excellent job. We recorded the album at a secluded location in the Blue Mountains. What also made a difference was the addition of Fixi's accordion and Robbie Lyn's piano playing."

With a career spanning 5 decades, you've amassed an extensive back catalog. How did you go about choosing the songs you wanted to redo for this 'Inna De Yard' album?
Ken Boothe: "Well, it wasn't even me who picked these tunes, you know. Everything was already planned. But I was quite happy with the selection, as some of the songs on the album, like 'Let Te Teardrops Fall' for example, I had never performed on stage and now I finally get that chance to do that. I used to do an a capella version of 'Black, Gold And Green' once every so often, but I'd never done it backed by a full band."

From these Inna De Yard versions you now recorded, was there one in particular where you said: "Wow, they really did that song justice!"?
Ken Boothe: "Well, I can't lie, I love the whole project, but if you really ask me to choose, I'd say 'Let The Water Run Dry', 'I'm A Fool' and 'Speak Softly Love' are my favorite three. I just give thanks for being given the chance to do this!"

How did you originally get started in music?
Ken Boothe: "The first one who really introduced into the music business was my sister Hyacinth Clover, who took me with her to her rehearsals. She is a true all-rounder as apart from a performer, she also is a hairdresser, dress maker and a baker. My first stage experience was doing pantomime. Whenever my sister needed a young person to perform on her show she would call on me. After a while I started teaming up with y younger sister and we performed as Jack & Jill. The name was inspired by the 'Jack And Jill' nursery rhyme. In those days most of the children in Jamaica could relate to these names. Every Monday night Hyacinth hosted her show at the Palace Amusement Theater and me and my sister would do our dance performance. Everything then changed for me when I met Stranger Cole. After school I often used to hang out at Alpha Boy's School and that's also where I got my first stab at playing the piano. Of course I couldn't play, but I would just hit one note a sing to it. Stranger used to live in Denham Town just like me, and both being interested in music, we were bound to meet at one stage. He took me along to Duke Reid's Treasure Isle, which was my first studio experience. We recorded 'Uno Dos Tres' for Duke, but we felt we had to try our luck at Studio One, as that was really the place to be at that time. All the great vocalists of the era - Owen Gray, Jackie Edwards, Lascelle Perkins, Jackie Opel… - were singing for Coxsone Dodd, so if you didn't manage to get in there, it kind of felt as if you hadn't really made it as a singer. Fortunately Stranger had already made quite a name for himself, so we had no problem convincing Coxsone to give us a try. The first two song we recorded there were 'Artibella' and 'World's Fair'. For some reason I immediately felt at home there, so kept going back there every day. One day I was just hanging out outside of the studio, when Coxsone Called me and said: "Ken, I know you can sing, so I want to sign you up and record you!". I asked him if I he was sure I could make it as a solo artist, but he assured me stating he'd never heard a voice like mine. He first had me record soul tunes, but when ska started to become popular I switched styles and recorded 'You're No Good' and 'Set Me Free'. And then my big break came when I wrote 'The Train Is Coming', which became my first big solo hit in Jamaica. The tune was so popular, that one day when I got into trouble with the law for smoking herb, some local children started making fun of me singing: "The jeep is coming Ken Boothe, the jeep is coming Ken!" (laughs)."

For 'Speak Softly Love', a tune everyone will recognize from the famous melody used in Francis Ford Coppola's 'The Godfather' movie, you based your version on that of American singer Andy Williams. How did you discover his song?
Ken Boothe: "At the beginning of the nineteen seventies I spent some time at a friend's place in Canada. His name was Paul Buchanan and he owned a huge music collection. We would sit around listening to his records for hours on end. One of these albums was 'Love Theme From 'The Godfather' (Speak Softly Love)' (Columbia, 1972, red.) by Andy Williams. It's more or less the same story as what happened with 'Everything I Own'. When we were listening to that song (originally done by American soft rock band Bread, red.) my friend turned to me and told me: "Ken, when you go back to Jamaica, you have to record a version of this song!". Thing was though that in those days I was recording at Federal Records for Lloyd Charmers, and he didn't really allow me any say in what we recorded. So when I suggested I wanted to do a version of 'Everything I Own', he dismissed it out of hand, telling me he didn't have time for that sort of nonsense. Luckily the resident musicians intervened on my behalf. When I started singing: "You sheltered me from harm…", the studio exploded and Mrs. Khouri even exclaimed: "If this song doesn't reach number one, I'm going to sell this whole complex!" (laughs) Of course 'Everything I Own' shot to number one in the Jamaican charts in no time, but then one day I received an international telegram stating the song was also about to enter the charts in the UK, asking me if I would come to perform on Top of the Pops. Thing is because of the success the song was having in Jamaica, I had so much work I couldn't take the time out to travel to Europe, so in the end the people at the BBC just used a guy who more or less had my height and stature and made him perform the song while keeping his face shaded so the people wouldn't notice he wasn't me! Eventually I still made it over there and found myself amidst established international artists like Elton John, Hot Chocolate and Garry Glitter. Back then the music for Top of the Pops was recorded beforehand and because of Music Union regulations you had to use local musicians. So all of a sudden I find myself surrounded by this thirty piece orchestra I'd never rehearsed with… I just started praying, asking: "Lord, please help me get through this!". When the recording started I managed to blank out the whole orchestra and just focused on the rocksteady rhythm and the resulting take was superb! I ended up doing Top of the Pops 14 times in a row! Now when after this I contacted Trojan Records, which at the time was still managed by Lee Gopthal, to claim my royalties, but instead found out the company had filed for bankruptcy! After that my career went through a downward spiral. I travelled around for a while, doing the odd concert here and there, but when I arrived back in Jamaica I was flat broke. But then Olivia 'Babs' Grange, the current Minister of Culture, took me under her wing and started getting me shows in Jamaica again. Then I was fortunate enough that UB40 covered two of my songs ('The Train Is Coming' and 'Just Another Girl', red.). At that point I was still lodging at my mother-in-law's house, but Babs then purchased the home in New Kingston we're I'm still living to this day. Just to tell you that music is no easy road and anyone that tells you different is a liar! I've been through a lot of ups and downs in my career, but faith can move mountains!"