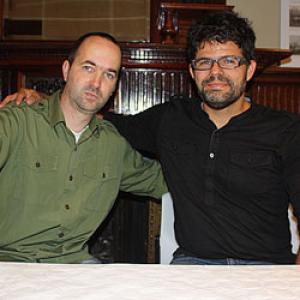 Drew, although Kobo Town is hailed everywhere as being a great calypso revival project, I've gathered you don't completely agree?
Drew Gonsalves (lead vocals, cuatro, guitar): "What we do with Kobo Town is definitely very calypso-inspired, both in melody and lyrical approach. The thing is, calypso music is very well-defined and I feel a great deal of my music falls outside of these limitations."

What does the title of your most recent album, 'Jumbie In The Jukebox', refer to?
Drew Gonsalves: "A jumbie is a folkloric spirit; you'll find them popping up in folk tales all over the Caribbean, but they're called different names depending on which island you're on, ranging from duppies in Jamaica to loa in Haiti. In these folk tales they are often mischievous to malevolent figures. We recorded this album at the Stonetree studios in Belize and the equipment Ivan Duran has there is incredibly vintage, evoking a sound from days gone by. That's how I got the image of a jukebox haunted by a jumbie making it spit out songs from all the various periods in Caribbean music."

Even in its native Trinidad, calypso has largely had to make way for soca. What would you say are the main differences between these two genres?
Drew Gonsalves: "For me calypso has depth and melody, things modern soca lacks all too often. Soca has the easy accessibility that all high-energy party music has. Calypso has always been much more lyrically-centered than soca. It doesn't mean calypso is always serious or political, but the attention is always on word play, playing with double meanings and humorous innuendo."

In Europe we've seen a resurgence of calypso recently, with bands popping up left and right. Can we talk of a calypso revival yet?
Drew Gonsalves: "I'm not sure if calypso music really ever died! (laughs) It might not have the global reach it once had, but I think it's still very much alive. Trinidad still has a lively calypso scene, even though it's limited to the people who consciously seek out the music in the "tents" (Calypso tents are venues in which calypsonians perform during the Carnival season. They usually are cinema halls, community centers, or other indoor buildings which have seating and stage arrangements to host the entertainers, guests and patrons; or outdoor shows which are held in parks. Such venues are still called "tents" because calypsonians all used to sing on stages which were literally covered by a tent, red.). There's still very good music with cleverly written lyrics being made in our time; just the other day I was watching Macomere Fifi, the calypso queen of Toronto, performing a very witty song about the mayor of Toronto and the way she approached the subject really reminded me of the way the early calypsonians dealt with the political leaders of their time. That being said, I think it's a hopeful sign that bands are now also starting to spring up outside of the Caribbean diaspora, like Lord Mouse & The Kalypso Katz in Germany and King Selewa & His Calypsonians in France."

You left Trinidad at a young age. Was calypso the music you grew up on or did you rediscover the genre at a later age?
Drew Gonsalves: "I left Trinidad as a young teenager and until that time it was all around me, but hearing music and really appreciating it are two different things. I didn't really develop an interest in calypso music until I moved away. I think that is a very typical experience for many migrants, leaving their home country only to realize they had an identity and culture of their own they took for granted and started missing when they moved away. That also happened to me and that's when I started collecting old calypso records. The music on them really blew me away as it tells the whole story of Trinidad. One thing that really fascinated me was the fact the calypsonians always managed to approach these subjects with a lot of humor.

If I say 'Kaiso Newscast' is the song on 'Jumbie In The Jukebox' that captures best what calypso is all about, would you agree?
Drew Gonsalves: "It definitely summarizes what calypso was about in its early years when it captured just about anything that was going on in the world... The Graf Zeppelin was seen flying over Port-of-Spain and Attila the Hun (born Raymond Quevedo, red.) wrote a song about it, money went missing from the treasury and 'Treasury Scandal' appeared and when Mussolini invaded Ethiopia it was also covered in a calypso song (Roaring Lion's 'Advantage Mussolini', red.). The music has lost the urgency it once had and that's what 'Kaiso Newscast' is about."

In 'Postcard Poverty' you're criticizing the fact the Caribbean is too often still seen as one big tourist destination.
Drew Gonsalves: "What I'm really criticizing in that song is the type of tourist that comes to see how the other half live, visiting the slums because they think it's exotic and offers them an opportunity to shoot some pictures they can show their friends when they get home. The other type of tourism that is quite deplorable is resort tourism; people coming to stay at expensive hotel resorts often completely detached from the rest of society."

What is 'Road To Fyzabad' all about?
Drew Gonsalves: "Fyzabad is a small town in Trinidad. It was named after a city in India by the same name (Faizabad in Uttar Pradesh, red.). At the end of the nineteenth and the beginning of the twentieth century Trinidad knew a lot of Indian immigration, so there are a lot of place names on the island with Indian connotations. In 1937 Fyzabad became the focal point of a huge labor union uprising. It all started when the police tried to arrest a popular union leader called Uriah 'Buzz' Buttler. The police was chased by the crowd and one policeman was killed. More police were sent in and riots erupted. Eventually the unrest spread all across the island until eventually the British military was called in to suppress it hard-handedly. This rebellion was unique because it united various sectors of society and for a brief moment racial differences didn't seem to matter anymore. In that perspective the uprising represents a moment of hope in Trinidadian history."

'Diego Martin' is your salute to the town where you were born.
Drew Gonsalves: "Diego Martin is a small town in the Diego Martin valley just outside of Port-of-Spain. I guess these days you could consider it to be a suburb of Port-of-Spain. I left that place quite abruptly at the age of thirteen and ever since then I've developed a nostalgia for it; not only because of what Diego Martin really is, but because it represented my childhood years. A lot of the imagery I use in the song is real; we left Trinidad on board a fishing boat, slowly watching the island disappear in the distance as if it was swallowed by the ocean. It was at that point I knew my life as I knew it was over; it was the proverbial end of my childhood so to speak."

How has your music been received in Trinidad?
Drew Gonsalves: "When you're a musician you become so involved with your own music, it becomes hard to estimate what someone else will think about it. Of course I'm only reaching a niche audience with my music in Trinidad, but I'm happy I've been able to touch some people and since the release of 'Jumbie In The Jukebox' I keep receiving positive feedback from the island. While I appreciate positive feedback wherever it comes from, it's especially heartwarming to receiving it from the place that inspired the music!"