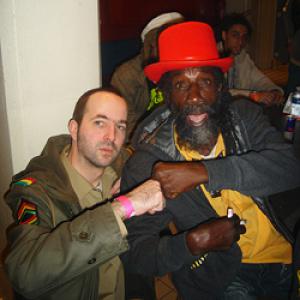 Saying Horsemouth is saying drums. How did that all start for you?
Leroy 'Horsemouth' Wallace: "Well, drumming is something you have in your head, you know, and music is in your heart. The only thing you really need is some time to bring it to fulfilment on an instrument. One of the first things I did as a drummer was play with Burning Spear. It was still a trio back then and they had just come down from St. Ann's Bay to audition for Jack Ruby. Ruby introduced us and I played the Joe Frazier riddim for them. That used to be King Tubby's signature tune. Before that, I even used to play drums for my grandmother who was into Pocomania. We played riddims like this (starts drumming away on the table and starts singing): "Hallelujah praise our Lord, so when Jesus come we praise him, hallelujah praise the Lord!", which still contain a lot of African elements brought over by the first slaves. I was taught music at the Alpha Boys School, a school for wayward boys. My parents couldn't really afford to give me a decent education, so that's how I ended up there. Apart from music they also taught me printing and toil making at Alpha. The first job I held after I left Alpha was actually at the Government Printing Office, printing passports and other official documents. In those days I also had the idea to start my own newspaper, following the example set by Marcus Garvey, who's one of our national heroes and who had always been a great example to me. I consider myself to be a Pan-Africanist like he was. That's also why I think the message of the music I'm involved in is so important; I want to inform the people, let them know what's going on. Artists like Bob Marley, Peter Tosh and Jacob Miller levelled the path for us, but it's up to us to continue their legacy. Nowadays, most youths in Jamaica seem to be wasting their time away singing about guns and girls - even my own children, you know - and I like dancehall too, just as long as it has conscious lyrics. The Bible says: "Players of instruments, my springs are in thee." (Psalms 87:7, As well the singers as the players on instruments shall be there: all my springs are in thee, red.), so we as musicians have a responsibility to carry out Jah message and that's what I try to do. You don't even have to be a Rasta to do it! Look at what's happening over here in Europe now or in the US, there's white people playing reggae all over the place now, something we wouldn't have dared to imagine back in the day."

A lot of people will of course also know your name from playing the lead in the movie "Rockers". How did you get that role all these years ago?
Leroy 'Horsemouth' Wallace: "Back in 1976 I was playing with Burning Spear. He had just released the 'Marcus Garvey' album, so he was at the height of his popularity. When we did a concert at Madison Square Gardens in New York one night, we met Ted Bafaloukos, the director of the movie. He was telling us he was going to come to Jamaica to make a movie and that he was still looking for people to be in it. I wanted to impress, so I told him I had already done two movies. At first he was just planning to do a documentary, though. His whole budget was only about 500.000 US dollars and of course he went to Bob Marley and Peter Tosh first, but these guys were asking way too much money, so in the end they paid 50.000 US dollars to Bunny Wailer to do the theme song and I ended up doing the lead for 30.000 dollar, Jamaican that is! (laughs) The whole thing was shot in my yard. I loved to do it, though, and for me it was just another way to spread the culture. The shot where Burning Spear is singing 'Jah No Dead' on the beach was shot in St. Ann's Bay on the location where the prison used to be, where they first locked up Marcus Garvey and, with the sounds of the waves added to the music; that was truly a magical moment."

At which stage of your life did Rastafari find you?
Leroy 'Horsemouth' Wallace: "Well, that was really only when they started saying: "Selassie I is dead!" in 1975, you know. That vexed me and from that moment I really started to take it seriously and it became my salvation, you know. I had the same feeling when Bob Marley died and again when Coxsone passed away."

More recently, you started Rockamovya together with Harrison Stafford of Groundation. How did that project come about?
Leroy 'Horsemouth' Wallace: "Harrison is Jewish and I've always had a soft spot for the sons of Israel. Although Harrison is a very nice person, when I met him he was still a professor (Between 1999 and 2001, Harrison Stafford taught the first course on the History of Reggae Music at Sonoma State University, red.) and I never thought he would be able to play reggae music. There was no need for him to play reggae music either, he could have done anything he wanted, really, but he decided to pursue that path anyway and that reminded me of myself. I could also have played other types of music and made a lot of money, but being a Rasta, that never appealed to me so I stuck with reggae. I used to drum with them every year in February when they organised their annual Bob Marley tribute. From playing together, the idea to start Rockamovya really developed. The French company (Nocturne, red.) that distributed the album went bankrupt so that's why we haven't really done a tour yet, but hopefully that's going to happen in the future."

You worked with so many artists over the decades, asking you to pinpoint certain highlights would perhaps be too difficult?
Leroy 'Horsemouth' Wallace: "More recently, I remember the sessions I did with Jah Mason for his 'Princess Gone... The Saga Bed' album, but these days they are using far too many computer-generated drumbeats. I spent twenty-five years at Studio One, you know, so it's difficult for me to pick just one artist or one album, but if you really insist, I would go for Burning Spear's 'Marcus Garvey/Garvey's Ghost' album; the dub versions especially really stood out for me. That's an album that will live on for generations to come."

In closure, I have to ask you about your moniker, Horsemouth. How did you come by that name?
Leroy 'Horsemouth' Wallace: "Well, I have a sister who was raised in England. Now when people who are not used to our climate come to Jamaica they tend to get a rash. One day, I was making fun of her because of that, telling her things like: "Look at your spotted legs!" and so on and she got vexed and shouted: "You really got a horse mouth on you!". For the remainder of that day we kept on insulting each other, throwing "spotted legs" and "horse mouth" back and forth. Later on, I told my friends on the corner the story and they immediately started laughing at the horse mouth thing. From that time, they started calling me Horsemouth. Now at first I didn't like it at all; as a matter of fact I used to carry a rock in my pocket which I used to throw at whoever dared calling me by that name, but after I starred in "Rockers" I started thinking it wouldn't be a bad name for a movie star, so when they wanted to introduce me to the press as Mr. Wallace, I said: "No, call me Horsemouth!" and that's how it's been ever since."