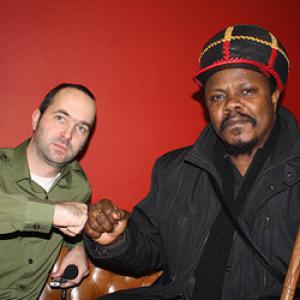 Messenger, the first song of your new album, ‘United States Of Africa', was written by Duane Stephenson. How did you come to sing it?
Luciano: "Well, from time to time, I invite other people to write me a song. Duane Stephenson is one of my biggest fans; he grew up listening to my music. He's also a conscious artist and a great songwriter as well, so for me it was a great honour to be able to try to do justice to his song. 'United States Of Africa' really fits the time we're living in, because the unification that countries here in Europe have been striving for for years now, is something the African nations could and should adopt as well. The fact you have to get a visa to travel from one African nation to the next is a joke! It shouldn't be that way. I also believe Africa could benefit from having only one currency, just like Europe has the Euro and the United States has the dollar."

What struck me when I got the album was the fact that instead of pictures of you, it only featured maps of Africa.
Luciano: "Yes, the emphasis of this album had to be on Africa and that's why we chose a map of the continent for the cover. I think it was a great idea to design the album this way. People are already fully aware of what I look like, so it couldn't hurt to focus on the subject matter of the album for once."

Of course the idea of a unified Africa is not new; His Imperial Majesty Emperor Haile Selassie I himself already established the Organisation of African Unity, now the African Union. What was keeping that organisation from reaching its goals?
Luciano: "I truly believe that one of the key factors there has been the fact that a lot of the African leaders, who joined the OAU, never really conformed to the principles laid down by His Majesty. The same is true for the United Nations by the way, for which predecessor, the League of Nations, His Majesty wrote the charter as well. This is one of the reasons the world is in so much disarray now. We're simply not upholding our own rules. A true king or president must be a mediator between the people and God. I&I believe in a theocratic government whereby the king is a spiritual leader as well as a political one. Our leaders are living far too much to their own desires. We've seen that so-called democracy is not really working anymore. Greed and envy have caused the world to be in a state of imbalance."

I think you've noticed the differences in Africa first hand. I know you love visiting Gambia, but a recent trip to Zimbabwe was a totally different experience.
Luciano: "Zimbabwe has been going through a lot of problems for a while now, and with my presence I just wanted to show my support for the Zimbabwean people; to strengthen them spiritually, so to speak. Bob Marley already went there in the seventies and even wrote his song 'Zimbabwe' for the occasion. As musicians, singers and players of instruments, we are messengers and we have to go wherever we're needed. I don't believe in the principles of President Mugabe and the way he goes about achieving his goals; if you want to change something, you have to approach it with a certain degree of diplomacy, respect and a level of love too. The idea behind the land reforms might have been a noble one, but in the way he has gone about achieving that, he has made a lot of mistakes. I've not only been to Gambia and Zimbabwe, though, but also visited Ghana, Kenya and Ethiopia, for example. I think it's especially important for us, as reggae musicians, not only to sing about Africa, but also to go there!"

You just mentioned Bob's visit to Zimbabwe there, some thirty odd years ago (1980, red.). Back then Robert Mugabe was still hailed as a hero, a freedom fighter; meanwhile we've seen a whole different image of the man. What do we have to look for in a man or woman, to be sure he or she will become a truly great leader and not, as happens so often, a disappointment?
Luciano: "One of the most important things we have to look for in a leader is passion. In music, I'm thinking of an icon like Bob Marley - the passion he put into his music made him larger than life - but even Christ himself had a passion for his ministry and His Majesty had a passion for Ethiopia and for Africa. It's the way they go about achieving those passions that sets the true leaders apart. A true leader has to try to conform to the principles of the Bible as well. That holy book tells us we have to go about achieving our goals in an amicable way, always respecting the principles of the almighty. He gave us His commandments to follow in Exodus 20, but people still keep on doing these things. I am convinced Jah will judge us in the right time. I can only try to guide people spiritually with the music I play! Rastafari!"