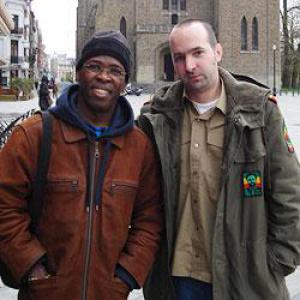 Mamady Keita, 50 years in the business! Let's start at the very beginning of your life story; because you were already drumming on just about anything you could lay your hands on when you were child, people started calling you "Mamady Nankama", meaning "Mamady who was born for this". Has there ever been a moment in your life where you thought of doing something else than music or playing the djembe?
Mamady Keita: "No, I've always wanted to play music on the djembe. My life story was already foretold before I was even born! When my mother was still pregnant she went to see a fortune-teller. In Africa this is still a common practice. Pregnant women visit a fortune-teller to know if they are carrying a boy or girl and to find out its destiny in life. The fortune-teller told my mother: "Listen, the child you're carrying is a boy and he will be your last child. The things I'm about to tell you, you will have to repeat them to someone younger than yourself, because by the time your son will have reached adulthood, you'll no longer be there and your husband neither. This child will be bigger than our entire village! He will be bigger than the entire region, bigger even than our whole country and he will be known the world over." My mother had listened attentively and asked: "So, he'll be president then?", but the fortune-teller answered: "No!" "A great warrior then?", but again the fortune-teller answered: "No!" "Will he perhaps be a rich business man then?" my mother asked, but the fortune-teller answered negatively once again. "I don't understand!" my mother sighed: "What is going to become of him then?" The fortune-teller looked at her and smiled: "You're son is going to have a lot of fun. You will have to observe him from birth and he will show you his path in life himself." Now from the moment I knew how to crawl, I started banging on everything that made a sound. When my mother put a bowl of sauce on the table for example, I would turn it over just to be able to drum on it. My mother caught on to what I was doing soon enough and one day she went to see an old craftsman and asked him to make me a small djembe. From what my mother told me, the look in my eyes when I saw that djembe for the first time was indescribable. It was as if I saw my entire life flashing before me. I really started to learn how to play the djembe at the age of seven, the year my mother passed away and I finished my initiation when I was ten, the year I also lost my father. Everything came to pass exactly the way the fortune-teller had foreseen it! At the age of twelve I was selected to take part in a national competition."

You then became one of the youngest members of the famous Djoliba Ballet. Could you tell us a bit more about the importance of the national ballet troupes in Guinea's cultural history?
Mamady Keita: "After Guinea gained its independence, art and culture quickly became the president's (Ahmed Sékou Touré, red.) main passion. He saw art and culture as the ideal means to promote the country abroad and quickly started to organise competitions to find the best artists and unite them in a national ballet troupe. I was also recruited for that reason and was taken to a small island (one of the Lo[o]s Islands lying off the coast of Conakry, red.), where I found myself surrounded by hundreds of other performers. We underwent further training for about a year, a period in which the number of participating artists eventually dwindled down to 45. I don't think I have to stress the severity of the training program. We had to get up every day at five in the morning and our training had an almost military character. When we finally finished our formation we immediately started to represent our nation by travelling the world and giving performances everywhere. In 1966 we participated in a big festival of folklore in Agrigento in Sicily (The International Folklore Festival or Ethnic Almond Festival, red.) where we won the grand prize and I was elected the best djembefola (djembe player, red.), something I repeated at the first pan-African Festival in Algiers in 1969. I opened the first djembe school in the world (Tam Tam Mandingue, red.) in the Chaussée de Boondael, right here in Brussels, and these days we run 15 branches all over the world."

Why is teaching, passing on your expertise, so important to you?
Mamady Keita: "On my travels I encountered many people who were interested to learn how to play the djembe, especially after the release of "Djembefola" (Laurent Chevallier, 1991, red.), a documentary about me and my career, a bit of a djembe hype developed. Sadly, the djembe was still often seen only as a noisy percussion instrument. That's not what the djembe is about, though; as an instrument it's equal to a piano, a violin or whatever other western instrument and since there were already schools for these instrument, I could not find a reason not to open one for the djembe as well. First and foremost, I wanted to protect my culture, our traditions and the instrument I love."

You just mentioned the documentary "Djembefola" there, but that wasn't your first encounter with the world of cinema.
Mamady Keita: "No, in 1964, I played a small part in "Africa Dance" a movie by Harry Belafonte. Belafonte was on very good terms with the Guinean president, Ahmed Sékou Touré - God rest his soul - and he asked him to provide him with a private ballet troupe he could use in his movie. This was more or less at the same time when I was recruited for the national ballet troupe and it was Harry Belafonte and his team who became our first trainers. Something must have happened between Belafonte and Touré, because one day he and his crew left the island never to return. From that day onwards, we were trained by a team of Guinean civil servants and the Djoliba Ballet became the president's private troupe. He even had an entire stage constructed at the presidential palace, and from that point onwards we rehearsed our choreographies there. Often times, the president would even join us on stage during one of these rehearsals. The scenes that eventually ended up in the film were shot during a performance of the Djoliba Ballet at the National Festival."

You continued performing with the Djoliba Ballet until well in the 1980s, but towards the end of that decade you met Poney Gross and Patrick Wallens, the two gentlemen behind Zigzag World.
Mamady Keita: "Towards the last years of his regime, Sékou Touré had become quite dictatorial. I wanted to leave the country and try to make it on my own. I first signed with a group from Ivory Coast called Koteba D'Abidjan, which was founded by a Guinean called Souleyman Koli. During one of the tours I did with them, we also ended up in Belgium and that's how I met Poney Gross, who's my manager now, and Patrick Wallens, who since became the organiser of Couleur Cafe, the festival here in Brussels. They had just opened an international school of percussion at the time (Repercussions, red.) and wanted to know if I was interested to participate in the project. I immediately agreed to take part and moved to Belgium in the spring of 1988."

That was also the time you put together your own band, Sewa Kan. What did you want to achieve in creating that band?
Mamady Keita: "When I moved to Belgium, for a while I concentrated solely on my teaching job, but after some time I started to miss the stage. I then invited Ken N'Diaye, a professional dancer from Senegal, and Didier Labarre, a great percussionist specialized in Cuban and African rhythms and at first Sewa Kan consisted of just the three of us. Our very first performance was at an event organized by Radio 21 in 1988 (at the Espace Delvaux, Watermaal-Bosvoorde, red.). Not much later we invited Nevy Fiaty, a Togolese, to join us. The band kept growing and these days we're twelve on stage, delivering a vibrant spectacle."

One often hears it's very difficult to record percussion in a decent way.
Mamady Keita: "It can be done and when it's done right, the result is heart-warming. I recorded quite a few albums myself, but for my last album, a live recording called ‘Hakili', I insisted on a DVD recording as well. It's only when one can see the images going with the sound that one can really imagine the energy and the sweat of an artist and value the effort he has to put in his art."

You've got houses in the United States, Belgium and Guinea. Where does Mamady Keita feel most at home?
Mamady Keita: "(laughs) Each of these places has its own meaning to me, but I was born in Guinea and that's where everything started for me. That place is the source of my existence. San Diego is the place where my wife and daughter live, so naturally I feel at home there as well, and Belgium is where my solo career started. The fact that I'm now a world renowned star has its origins here and that's something I will never forget. In Japan, I was also very well- received - the Japanese even built me my own private school on one of the islands (Mishima, red.), but without the work I did here in Belgium, they would probably never have discovered me. I want to say thanks to Guinea, where I was born, thanks to Japan, the country that adopted me so warm-heartedly, and thanks to Belgium for all the good things that are happening in my life today!"