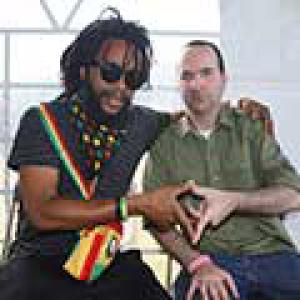 Micah, growing up in the Twelve Tribes movement; what would you say has the importance of that organization been in your development as a youth?
Micah Shemaiah: "Well these days a lot of youths gravitate towards bad and derogatory behavior, something which I blame on the negative influence of the media. Growing up in the Twelve Tribes movement kept me away from that and provided me with a platform where I could get to know myself and find out what direction I wanted to take in life; the groundation of knowing how your spirituality connects with a higher purpose, that's what I found in the Twelve Tribes. Of course we also can't negate the massive musical influence Twelve Tribes members like Bob Marley, Dennis Brown have had on Jamaican society in general and me personally as well. To see these rastamen from humble backgrounds making it all the way to the international stage and taking Rastafari from a dutty lifestyle to something that has now almost become mainstream, was massively inspirational."

What tribe are you a member of and how does that reflect in your personality?
Micah Shemaiah: "I'm a Benjamin and I definitely think that reflects in my personality. I'm a wolf! (reference to Genesis 47:22, Benjamin shall ravin as a wolf: in the morning he shall devour the prey, and at night he shall divide the spoil, red.) People say that I'm very outspoken and that definitely ties in with the Benjamin tribe."

Before investing yourself fully into your music career, you worked as a paralegal for a while. Do you feel that degree, that education still helps you as an artist as well in some way or the other?
Micah Shemaiah: "I think it does, yes, especially when I'm doing interviews for example or trying to discern the business side of things. Starting out in the legal field has turned out to be a great stepping stone for my career in music really. For example it taught me to articulate and express myself properly and it's also something I can fall back on should my career in music not work out in the long term."

Musically there seems to be a huge difference between your 2009 debut album 'Rastaman Meditation' and 'Original Dread'. Can I see it as a musical reinvention?
Micah Shemaiah: "Well, the 'Rastaman Meditation' album was a project where I basically did everything myself, with a bit of help from my brethren Jahnoi Nunes aka Selah of Jah Ova Evil. As I look back on it now, it wasn't a true representation of what Micah Shemaiah is about musically, but it was a decent effort to test if the world was receptive to I&I talent. That being said, the album does portray where I was at, at that moment in time. 'Original Dread' now, reflects my growth as an artist; my mind is set now and I know exactly what musical direction I want to head in. The result is a more settled, balanced and forward thinking album."

For 'Original Dread' you hooked up with Will Tee of the UK based Descendant Music. How did that collaboration come about?
Micah Shemaiah: "That connection happened through Ras Kush of Black Redemption. I did a song with them called 'We Know', for which Will T created the riddim. I really liked the way that riddim was put together and it had a very tough and militant vibe. A few months after we did 'We Know' Will contacted me saying he wanted to record a few more singles with me, but that's not really the way I like to operate. I've been reproached for releasing to little material, but I'm absolutely against saturating the business, that's not what music is about for me. Instead of doing those singles I suggested recording a full album and that's how 'Original Dread' came about. I greatly enjoyed working with Will and will definitely be working with him again in the future; he's a very humble youth with a beautiful soul and musically he absolutely knows what he's doing."

Just before 'Original Dread' there was the 'Shackalack' album, a joint project featuring a number of artists from Jah Ova Evil which eventually will also be turned into a movie/documentary project I believe?
Micah Shemaiah: "Actually, that movie idea was something that had been playing around in our minds for a while already. The idea is to make is a kind of 'Rockers' for this generation representing the movement we're all part of, but we'd also like to feature some of the elders who've influenced us; people like Earl 'Chinna' Smith or Leroy 'Horsemouth' Wallace. It's going to be a feature film with a documentary twist; a visual testimony of our vision on the music we all love and want to preserve for generations to come."

You already mentioned Jah Ova Evil several times; is that just a group of singers working together or is there more to it?
Micah Shemaiah: "Most of us grew up together and have known each other for many many years already, so it's more like a collective of likeminded spirits. It's not just Jah Ova Evil either, you also have the Heights A' Life Movement with Jah9 and then there's Kabaka and Bebble Rock… It's similar to the youth programs we had in the Twelve Tribes movement. It's all Rastafari vision and works and our music is merely a vehicle to propel the message of Rastafari and try to save this world. And it's not merely musicians either; we have videographers, fashion designers, chefs and so on. The fact the world is now learning about our movement is because we've always been supportive of one another focusing on the collective rather than on the individual. In short Jah Ova Evil is a livity, a way of life!"