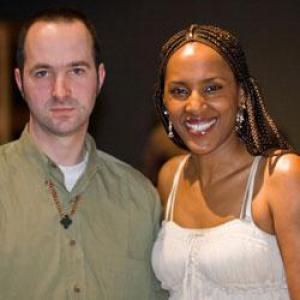 Being a reggae fanatic and Rastafarian, Ethiopia - the land of His Imperial Majesty Haile Selassie I the Conquering Lion of Judah, but also of the Queen of Sheba or even "Lucy", one of man's earliest predecessors - has always had a mysterious appeal to me. For centuries, it managed to keep its rich culture virtually hidden from the rest of the world, so it's not that surprising that Ethiopian music developed almost isolated from other African genres and foreign influences. Even the most fanatic world music lovers only have a slight notion of Ethiopian music and concert-wise they have to content themselves with rare concerts of well-known names like Aster Aweke or Mahmoud Ahmed. But now there's Minyeshu, a young Ethiopian songstress and dancer who settled in Eindhoven in The Netherlands a few years ago. Her second album, ‘Dire Dawa', offers a fresh outlook on Ethiopian culture and music.

Minyeshu, your second album is entitled ‘Dire Dawa'. The little I know about that place is that it's a layover point on the railroad between Addis Ababa and Djibouti, but it's also where you were born. What else can you tell us about it?
Minyeshu: "Dire Dawa has developed into a very nice city with a very different culture from the one you would find for example in Addis Ababa. The inhabitants of Dire Dawa are much more open-minded, maybe even more western-oriented as well, because the French have had an important influence in the area for a long time."

Ethiopia is like a patchwork of more than fifty tribes...
Minyeshu: "More than eighty actually!"

Where do you fit into that mosaic?
Minyeshu: "I try to fit in with all eighty of them. I don't really want to know what my roots are, as I don't think it's of much importance. I was born in Dire Dawa, but I grew up in Addis Ababa, the capital of Ethiopia, that functions like a junction where all cultural ethnicities from all the different parts of Ethiopia converge and mix. In Addis, no one differentiates."

Do you sing exclusively in Amharic?
Minyeshu: "No, I use different languages; apart from Amharic I also use Sidamo, for example. For westerners they might sound somewhat similar though."

And does that mean you are fluent in all these languages?
Minyeshu: "No, I just speak Amharic myself; the other songs are translated for me. I've got a lot of friends who aren't Amharic and they love it when I sing a tune in their language."

Musically speaking, your songs cover styles from all over Africa.
Minyeshu: "For the longest time, Ethiopian music has developed itself isolated from the rest of the world, and today it's still rather unknown for most people.  That's why I decided to include musicians from various other parts of Africa in this project so that they could add their own cultural influences to the music, thus creating a more universal sound. I think it makes the music more interesting and, more importantly, more accessible as well."

You started your career with the Ethiopian National Theatre as a dancer and choreographer. At which stage did you discover the power of your voice?
Minyeshu: "Well, actually I started out as a singer way before I joined the National Theatre. In Ethiopia, song and dance are very much intertwined. As time passed, I noticed I got more gratification from dancing, so I decided to focus on that. Dancing is still my greatest passion, but when I arrived in Europe I quickly noticed it's much easier to maintain a career as a singer than as a dancer here, so I started singing again."

Choosing a career as a performing artist used to be frowned upon in Ethiopia. Is that still the case?
Minyeshu: "No, things have evolved quite a bit. Back in the day, artists were considered a lower class in society. It was hard to make a living as an artist as well, because it paid very little. Often you also had to work in places where smoking (Because the Ethiopian Church has always frowned upon the habit, Ethiopia is still one of the countries where very few people smoke and smoking in public is still frowned upon in most places, red.) and drinking were allowed, two things that are also frowned upon in Ethiopian society. These days, though, artists are paid normal wages and that has helped making people think of working in performing arts as just another job."

You grew up in the Ethiopia under the communist rule of Mengistu Haile Mariam. How do we have to imagine that era?
Minyeshu: "Oddly enough, I've never experienced any problems during the communist era, artistically speaking that is. Of course we had to perform at big propaganda manifestations every so often, but apart from that, we were free to do whatever we wanted. My problems really only started when the new regime took over (Ethiopia is now considered to be a semi-democracy, but in reality the Ethiopian People's Revolutionary Democratic Front of prime minister Meles Zenawi holds all the power, red.)"

That's quite surprising to hear.
Minyeshu: "Everything changed when they took power. The entire board of the Ethiopian National Theatre was fired and replaced by civil servants who had no clue what they were doing; a terrible situation where we ,as artists, were degraded to being regime-operated drones."

In the song 'Buna' you talk about coffee. The Kafa region in Ethiopia is considered to be the home of the coffee plant and the beverage also plays a very important social role in Ethiopian culture. Can you tell us a little bit more about that?
Minyeshu: "Coffee is very important in Ethiopia. Whenever one receives guests, they immediately are offered a cup of coffee. It also works as a sort of social adhesive, bringing people together. Ethiopians can talk for hours when they're enjoying their coffee. It's a wonderful ceremony; the coffee is still often roasted and ground right in front of you (The coffee ceremony is an important social and cultural tradition in Ethiopia. Adult family members, neighbours and other guests take a seat in the area where the coffee is made. On the floor freshly cut grass is spread out often decorated with flowers. The hostess, dressed in traditional clothing, heats the fire. This can be fuelled either by wood or charcoal. On a second fire incense is burned. The raw coffee beans are first washed and then dried. In the mean time a flat dish is heated to roast the beans. The hostess stirs and shakes the beans until they become black and shiny. The coffee aroma slowly blends with that of the incense. The flat dish is taken off the fire and carried around the guests who in their turn inhale the aroma, guiding it into their noses by using their hands. Popcorn is passed around and the jebena, a black clay coffeepot with a rounded bottom and a spout in the middle, is filled with water and put on the fire. While the water gets to boiling point, the beans are crushed in a mortar. Once the water reaches boiling point, the coffee is added in small amounts at a time. The sini, small Chinese mugs, are waiting on a nearby tree-legged tray. Once the coffee is ready, it's poured into the sini from a significant height. It's an impressive trick, but a skilled hostess won't spill a single drop. Tradition decrees there are three serving rounds. The first cup is always served to an elder or an important guest. Children don't usually take part in the ceremony. The first batch is pretty strong; the tona, the second batch, is already milder and by the time the third batch is served, the baraka, the coffee is reduced to a weak extract. Once the ceremony is finished, the elders bless the house. Ethiopians use the ceremony to relax and it usually takes between two and three hours. The ceremony can also be used as a way of welcoming visitors, red.)."

To many people, Ethiopia still equals clichés like: starvation, drought and poverty. Should that image be adjusted?
Minyeshu: "Part of it is harsh reality; we've had to cope with famine, but that doesn't mean the whole of Ethiopia was struck. Ethiopians living abroad often joke that it's you guys in the West who are starving, because we're used to having up to four or five meals a day!"

Is it important for you to be able to denounce these clichés and show another side of Ethiopia?
Minyeshu: "Yes, of course. Again, we've experienced droughts and a number of famines, but there's so much more to Ethiopia. It's a very beautiful country with a rich culture and wonderful scenery. Unfortunately, consecutive wars and political dictatorships have created a very unstable image, but with my music I'm slowly trying to change that."