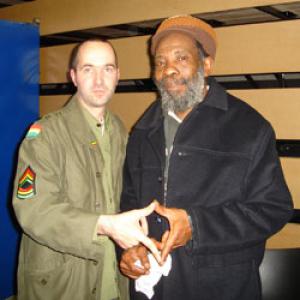 Poko, the history of Misty In Roots is undeniably linked to Belgium, as it was here that you guys recorded your first album, 'Live At The Counter Eurovision', back in 1979. Did you plan in advance to record a live album that night or was that just something that happened?
Walford 'Poko' Tyson (vocals): "We had no plans whatsoever to record anything that night, but the show was recorded anyway and when we heard the tapes, we decided to put it out there as a record. We still regard that as our most important record to date, so we're definitely linked to Belgium, yes."

For a lot of reggae fans 'Live At The Counter Eurovision' still counts as one of the best live albums in reggae. It being your own album, is that your opinion as well?
Walford 'Poko' Tyson: "I am not to judge, let the people do that. That being said though, I know it's a good record."

What can you tell us about the event it was recorded at? What was this illustrious "Counter Eurovision"?
Walford 'Poko' Tyson: "As I remember it, it was a very big event held at the Cirque Royale in Brussels. It was a very enjoyable and sociable event too, with bands from all over the world playing. It was all about real live music and not the fake pretence the real Eurovision Song contest is about; it was really an alternative to that event."

Before you started to make headway as Misty In Roots, most members of the band were backing a man called Nicky Thomas. Could you refresh our memories and tell us a bit more about him?
Walford 'Poko' Tyson: "Nicky Thomas was a Jamaican artist having some success, first in the Caribbean, but later on also in the UK. His biggest hit was a tune called 'Love Of The Common People', which most people will probably remember from the cover version by Paul Young. He really introduced us to the world of touring."

Another important factor in the history of Misty In Roots was the involvement of the band in the Rock Against Racism movement. How did you guys get involved in that?
Walford 'Poko' Tyson: "We're all from a borough called Ealing in West London and there we already used to take part in smaller anti-racist events (Originally conceived as a one-off concert with a message against racism, Rock Against Racism was founded in 1976 by Red Saunders, Roger Huddle and others. According to Huddle: "it remained just an idea until August 1976" when Eric Clapton made a drunken declaration of support for former Conservative minister Enoch Powell - known for his anti-immigration Rivers of Blood speech - at a concert in Birmingham. The campaign involved pop, rock and reggae musicians staging concerts with an anti-racist theme, in order to discourage young people from embracing racist views, red.). At a certain point, this Rock Against Racism movement was established as a sort of umbrella organisation bringing black and white anti-racist artists together. The Rock Against Racism concerts took us around the country and made Misty In Roots known to the general public for the first time."

The message of the 1983 album 'Earth' is as relevant today as it was back then.
Walford 'Poko' Tyson: "Yeah man, even though the fortunes of people on earth are changing and more and more voices are speaking up for change, it seems hard for man to change its ways, because we still keep on destroying our planet on a daily basis. Now, if we know that what we are doing is wrong, but at the same time we still keep on doing it, you have to wonder how that is possible. 'Earth' was already addressing these issues back in 1983 and it seems nothing much has changed since."

Something that has always fascinated is that little effigy or statue that's always featured on Misty In Roots albums. What's the story there? Where did that come from?
Walford 'Poko' Tyson: "It's actually a little statue representing an Ethiopian monk, holding his hat in one hand and his rod in the other. I have to admit I can't exactly remember how we came by it anymore! (laughs)"

Of course there's one band member of Misty In Roots who's sadly missed. What do you like to remember Duxie (Tyson, red.) by most?
Walford 'Poko' Tyson: "Duxie was my blood brother, so, for starters, he's just a part of my life. Sadly, some people have to go before others and we still miss him a lot, musically but also as an integral part of our lives."

Before you released the 'Roots Controller' album (Real World Records, 2002, red.), recording-wise things had been kind of quiet for Misty In Roots. What happened during those "quiet years", if I can call them that?
Walford 'Poko' Tyson: "Well, as you say we didn't do any recording work during that period, but we were still performing live all over the place. We've never been a band that's worried or pressured about releasing an album every year; we just take things as they come even if that means we only release an album every ten years."

'Roots Controller' was released on Real World Records, a label that's not really known for reggae. How did that come about?
Walford 'Poko' Tyson: "Back in the eighties we established our own label called People Unite and some of the people that were working with us back then are now working for Peter Gabriel, so that's how 'Roots Controller' ended up on Real World Records."

We already established the history of Misty In Roots is linked to Belgium, so I want to end the interview by asking if playing in this country holds something special for you guys?
Walford 'Poko' Tyson: "Yes, remembering the history we have in Belgium, we always have a warm feeling when we play over here. Belgium is and will remain a special country for Misty In Roots!"