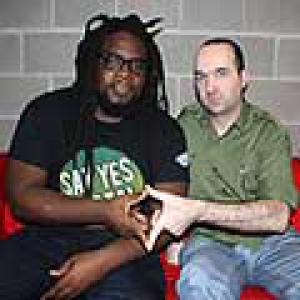 Mojo, for several years Morgan Heritage played festivals that weren't exactly reggae-oriented. Was that a conscious choice?
Mojo Morgan: "I think our music kind of carried us in that direction. As Morgan Heritage we've always been making statements that weren't exactly the type of thing you'd expect from a Rastafarian-inspired Jamaican reggae band - 'Don't Haffi Dread' perhaps being the most obvious example - and that opened the door to a larger audience of people who as far as reggae is concerned didn't get beyond Bob Marley and Peter Tosh and never really linked with that new wave of roots artists like Garnet Silk, Anthony B or Buju Banton, emerging at the end of the nineteen nineties."

You've always been infusing the band's sound with some hip-hop flavors. Why did you opt for that American hip-hop style of rapping instead of deejaying in Jamaican patois?
Mojo Morgan: "It's funny you say that, because recently I've started to incorporate more and more lyrics in Jamaican patois, but being born in Brooklyn, New York, hip-hop came just as natural to me as reggae music did. It's like being raised with the best of both worlds. Hip-hop is just something that became part of my musical identity. I also incorporated it in my solo project, the 'Got Mojo' EP, containing elements from hip-hop, reggae and rock, a fusion I called rasta-rock."

Could you drop some names? Which rappers did you listen to growing up?
Mojo Morgan: "Well of course I listened to iconic artists from the genre, people like Fat Boys, Eric B. & Rakim, Kurtis Blow and Big Daddy Kane. In the nineties I really got into Tupac and Biggie (aka The Notorious B.I.G. or Biggie Smalls, red.) and I'm still crazy about their style. I dig Jay Z, but he's nothing compared to the flow Biggie had. Tupac had a similar thing going. I respect their work a lot and may they rest in peace!"

In 2001 Morgan Heritage was part of the line-up of the Vans Warped Tour, a showcase for punk rock music. Was it there that you picked up the idea that reggae could be fused with other genres?
Mojo Morgan: "Being a part of that tour definitely made us a lot of friends and we really got close with people from bands like Rancid, Bad Religion, NOFX, Good Charlotte and Sum 41 to name but a few. What being on that tour made us realize, is that fusing reggae and rock or reggae and punk is nothing new. You can go all the way back to bands like Blondie or The Police and reggae icons like Bob Marley or Peter Tosh toured alongside bands like The Clash and The Rolling Stones. What we did was nothing new; it just hadn't been seen for a while! (laughs) Ironically enough the message of roots reggae and punk are virtually the same as both genres are basically about equal right and justice and equality for all mankind. That's also the reason both genres never really made it to the mainstream."

Your website (www.mojomorgan.com, red.) now features a new single called 'New Dawn'. Is that a first offering of an upcoming album?
Mojo Morgan: "'New Dawn' is first and foremost the realization of what I wanted my sound to be. On the 'Got Mojo' EP you could already hear me experiment with that sound. We already talked about hip-hop, but I might be even more influenced by rock music. These days I listen more rock than hip-hop, bands and artists like Coldplay, Nirvana, Jimmy Hendrix, Jack Johnson, Aerosmith and so on. I took me quite a while to figure out how I was going to fuse all these different musical influences that were a part of me into a coherent catchy sound that would also appeal to amateurs of all these different genres. In my opinion I first succeeded in doing so with 'Million Dollar Cheque', of which I also did a remix version featuring Steven and Damian Marley and Wyclef Jean, and 'New Dawn' is a continuation of what I started with that tune."

We've already talked reggae, punk and rock, but the intro to 'New Dawn' contains a sample of 'Feeling Good', a blues song by Nina Simone. How did you stumble on that?
Mojo Morgan: "I often get inspired in the early hours of the morning and for some reason that song popped into my head while I was jogging one morning. I kept on singing it the entire duration of my run and when I got home I immediately sent it to Peter. The voice you hear on 'New Dawn' is actually Peter's, so it's not really a sample of Nina's voice. Peter did a great job imitating her voice though! (laughs) I feel that in music, sometimes it's important to hear the same message again as some messages come before their time and as history tends to repeat itself, it never hurts to reiterate a message. 'New Dawn' probably introduced Nina Simone to a whole new audience as well and the young people should know who she was. Apart from being a great jazz vocalist, she was also an activist who fought for women's rights and laid the foundation for female artists like Beyoncé and Rihanna."

The visuals for 'New Dawn' have kind of a Batman-esque, Marvell Comics superhero feel to them. Is that something you're also into?
Mojo Morgan: "(laughs) Absolutely! Other than Spiderman, Batman is my favorite superhero. The reason for that is that he doesn't have supernatural or magic powers, but just relies on his gadgets and the inventiveness of his mind. As I felt I had also tapped into my own potential and strength for this track, the link with that Batman superhero universe seemed appropriate, with him coming from Gotham and me from Brooklyn, New York! (laughs)"

I have to ask you about 'The Girl Is Mine', the Michael Jackson cover you did for Easy Star All Star's 'Trillah' album. There's also a version of the song on Morgan Heritage's 'Here Come The Kings' album, but there it are Peter and Gramps singing lead vocals.
Mojo Morgan: "The two versions were actually virtually recorded at the same time, which wasn't really something that was planned but that simply panned out this way and since Easy Star All Star's 'Trillah' was released almost a year before we finished the 'Here Come The Kings' album, we didn't see it as much of a problem. Our fans are actually embracing both versions."

What heritage would you like Morgan Heritage to leave behind?
Mojo Morgan: "The heritage or legacy I'd like to leave behind is that of love and maybe that of a band that pushed the boundaries, because as American born children to Jamaican parents, when we decided to return to Jamaica, we nearly achieved the impossible: we became household names and the people received us as if we were already part of the community. Jah bless the Jamaican people every time for opening their hearts to the Morgan family. In daring to do so we made it possible for others to follow in our footsteps, as artists like Etana and Alaine have a similar background. If anything can be said about us when all is said and done I hope it will be that we as Morgan Heritage were trailblazers."