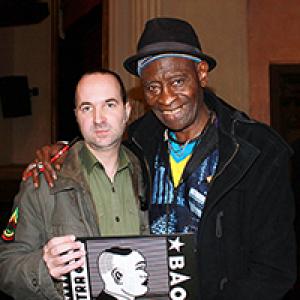 Issa, as a member of Orchestra Baobab you're known for being an excellent and somewhat eccentric saxophonist. Has the sax been the only instrument you've played during your longstanding career?
Issa Cissokho (tenor saxophone): "No, I started out as a percussionist. I played the djembe and the tama or talking drum. Then I started experimenting with the African guitar or ngoni and finally I also dabbled with the kora a bit. All in my own style and fashion of course! (laughs)"

You're a descendant of a Malian griot family. The music you play with Orchestra Baobab has little to do with Malian tradition though. What did you retain from your musical inheritance?
Issa Cissokho: "I'd say it's the main reason I've got music running through my veins. My grandfather was a gifted guitarist and my parents were musicians as well. Being born in a griot family is like being part of a family business. To me that's the essence of my griot heritage."

Orchestra Baobab took its name from a well-known club in Dakar.
Issa Cissokho: "True, but legend wants the baobab tree never dies, which kind of made us "the orchestra that never dies", a name we've tried to live up to over the years!"

There's an Orchestra Baobab album called 'Specialist In All Styles', hinting at the fact you guys could virtually tackle any style you wanted. But what were your personal music idols as a saxophonist?
Issa Cissokho: "To answer that question, you should know my first intention was to become a guitarist. It was with that aim in mind that I took to the music department of the Maison des jeunes in Dakar, only to discover they didn't own any guitars! The only thing I encountered was a collection of brass instruments, and that's how I ended up with a saxophone in my hands. But as soon as I tried to play it, I knew this was the instrument for me! In those days there was this Nigerian saxophone player called Dexter Johnson who was, among others, a member of the famous Star Band, and he became my role model. On night I went to the Calypso, al club in Dakar, to have a drink. Calypso Jazz was the house band there, and since I didn't have enough money to drink all night, I decided to grab my sax and join in. To my surprise I was an immediate hit with the crowd and not much later I joined the band as their regular saxophonist."

The new album 'Tribute To Ndiouga Dieng' is dedicated to the late Ndiouga Dieng, one of the original vocalists of Orchestra Baobab, who passed away in 2006. How do you remember him?
Issa Cissokho: "Ndiouga was a very generous man and a true music lover. He was born in Bargny (a village located on the Cap-Vert peninsula, located about 30 kilometers from the capital Dakar, red.) and like me was a descendant of a large griot family. One of his most famous songs was 'Dée Moo Woor', which he wrote after the demise of his father and translates as: "Death spares no one!". He was mostly known as a vocalist, but was a skilled percussionist as well."

After Ndiouga's demise, a number of other band members left.
Issa Cissokho: "Right! Rudy Gomis fell gravely ill and was replaced by Mamadou Sarr, whose voice resembles Rudy's. Then there's our lead guitarist Barthélemy Atisso, who preferred to remain in his native Togo. We found a replacement in Rene Sowatche, a young Beninese guitarist. Finally rhythm guitarist Latfi Benjeloun also quit and his place was filled by Yahya Fall. That being said, I don't think these changes have made much of an impact on the sound and vibe of the band. Or at least I hope not! (laughs)"