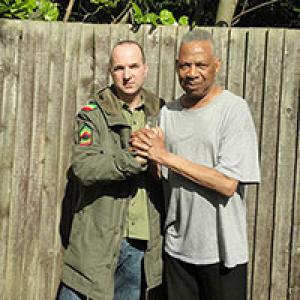 Owen, you got your first break in the Music business by participating in Vere John's Opportunity Hour. What can you tell us about that man? Who was he?
Owen Gray: "He was an upper-class Jamaican fellow who used to organize these talent shows all over the island. I'd already been singing in church and at school events for quite some time, so a friend of mine persuaded me to enter Vere John's Opportunity Hour. The whole thing was a bit like you have The X Factor or The Voice today. There were different rounds and finally you would compete for the final. I won my first final back in 1957!"

As a youth you also spent some time at the now famous Alpha Boys' School. How did you end up there?
Owen Gray: "Well, I wasn't there for very long, you know. Thing was, I was already interested in music and some of my friends were already going there, so I thought I'd give it a chance. That's where I formed a long lasting friendship with Milton Moore. Sadly his health has been declining in recent months, but that's how life goes…"

The first producer you teamed up with was Chris Blackwell.
Owen Gray: "Yeah, I recorded 'Patricia' for him which was the first ever release on his now famous Island Records label! In Jamaica he still released it on his Starlite imprint, but without my knowledge he also put it out in the UK on his new Island Records label."

With 'On The Beach' a tune you recorded for Studio One you set the trend for what's now known as the dubplate industry, it being considered the first song biggin' up a sound system.
Owen Gray: "That's a funny story actually, because I first wrote that tune in support of King Edwards The Giant, one of the other sound systems around at the time out of Ocho Rios. I was sitting watching the waves hitting the beach that night, watching the girls passing buy, when suddenly I was mesmerized by the riddim the sound system was playing. So I asked someone for a piece of paper and wrote the lyrics on the spot. Philip James from The Blues Busters, god rest his soul, also had a hand in the eventual song that came out of it. Now when I went to the selector asking him to play the riddim again, so I could sing him the tune I'd just penned, King Edward came over and asked me what I was talking about. I told him: "Sir, I just wrote a little tune about your sound system and I'd like to sing it for you.", so Edward turned to the selector and told him to play the riddim again and I ended up singing the song three times in a row, that's how big of an impact it had. It was an overall success, so I went to see him the Monday after and told him I wanted to record it for him, but he brushed me off, telling me to come back the next day. And the next day became, the day after and so on, so in the end I called it a day and tried my luck with Coxsone's Downbeat. When I talked to Coxsone about the tune I'd written, he turned to Ronald Alphonso, who was there rehearsing with Don Drummond, Lester Sterling, Lloyd Brevett, Jerome 'Jah Jerry' Haynes… well basically the entire Skatalites-crew (laughs), and told him to rehearse the tune with me. It just had a simple 12 bar blues rhythm, so it didn't take those guys too long to grasp it. Now when Coxsone heard what we were doing, he immediately chased us into the studio to record it. The engineer in charge was Graham Goodall and we recorded the song at Federal Studio's which at that time still belonged to the Khouri family, but these days is known as Tuff Gong. The tune subsequently became a huge hit over in the UK."

A lot of your earlier tunes were recorded with a band called The Caribs, who were from Australia. How exactly did you link up with them?
Owen Gray: "Well, I met them when I came over to the UK, back in 1962. They were just a bunch of talented musicians and I even wound up touring Australia with them at one point."

I know you also have a degree as a bookbinder and a printer. Did you ever put that to practical use?
Owen Gray: "Yeah, I did some printing and bookbinding for a while, back when I was still a youth. At the time it seemed a great opportunity for me to learn the trade so I could provide for myself. Looking back on it, I have to say I enjoyed it a lot. But in the end, to me music is the breath of life, pure and simple!"

Your first long player, called 'Owen Gray Sings', was released in 1961.
Owen Gray: "Another landmark moment, as it was the first Jamaican produced album! Jamaica was basically still a singles market back then, but it did very well in the UK. A few tunes from that album, like 'The Plea' for example, were also released as singles."

Gradually you were getting more and more exposure in the UK…
Owen Gray: "Well no one is a prophet in his own country. Not that I wasn't known or appreciated in Jamaica, but the way the music was promoted and distributed over here, meant that you could reach a whole new and different audience in a very short time. My brother already moved to the UK in 1961 and when he heard my records were also being played over there, after getting in touch with some people in the music business showing an interest, he wrote me asking me how I would feel about coming to the UK. I'll never forget the day I left; it was May 28th 1962, a Monday, and Jamaica declared independence later that year. I made the crossing by B.O.A.C. flight (British Overseas Air Corporation, red.), which was still a great luxury in those days as a lot of people still crossed the Atlantic by boat."

Was it also when you arrived in the UK that you started working with this young upcoming talent called Millie Small?
Owen Gray: "No, that started when I was still in Jamaica! I was on my way home one evening and passing Studio One I saw Coxsone talking to this young girl. We greeted each other and Coxsone said: "Owen, I want you to meet Millie Small. She's a singer from May Pen and I'd like you to tutor her.", so that's exactly what I did. The first song we recorded together was a tune I'd written called 'Sugar Plum' (released as Owen & Millie, Island Records, 1962, red.)."

At the beginning of the nineteen seventies you travelled to New Orleans to record an album.
Owen Gray: "What happened is that I'd resigned with Island Records in 1972 and in 1974 they decided to send me to New Orleans to record an album. The album was produced by none other than the late great Allen Toussaint and stylistically had me going the pop-soul direction. Sadly it was never released. It contained songs like 'Mr. Sun' and 'She's Making Up To Break Us Up'. That last one was a song I'd written about a girl who used to frequent the Le Bilboquet club in Paris. She was always checking her make up in the mirror, so I said to myself: "She's making up to break us up!" and that's how the song came to be. The last time I saw Chris Blackwell, I asked him about the album, but he shrugged it off."

The story goes you and Blackwell parted ways when he wanted you to give yourself more of a Rastafarian dreadlock look.
Owen Gray: "The thing is I never saw myself that way! For starters I don't like hair on my face… I had a beard for a while, but was soon done with it because I couldn't stand the feeling. I didn't understand why he suddenly wanted me to grow locks! So I decided to call it quits. But I'm here still, doing my thing, and even after so many people of all ages keep enjoying my music, so I have to give thanks!"