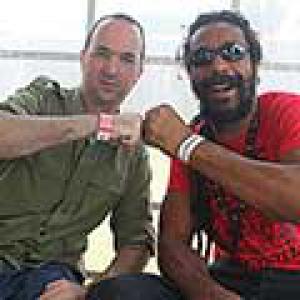 Prezident, do you feel being a country man changed your approach to music compared to someone born in the ghettos of Kingston for example?
Prezident Brown: "Most definitely! I was born in Clarendon in the Bull Head Mountain range and after a while moved to Saint-Mary which is on Jamaica's north coast. I think being from the country made me a mellower individual and I also believe it gave me a different perspective in dealing with people. In general people from the country are often more humble than people from the city and that's also something that applies to me. That's also reflected in my music as I always try to make the things I sing about be palatable to whoever is listening to my songs."

At which did you discover your talent and started thinking about a career in the music business?
Prezident Brown: "I would say the talent discovered me! (laughs) When I was still at school I was already known as someone who could paint and draw quite well. That's also how I was known in my local community back then as I did most of the artwork for the local shops and bars out there. As a teenager I got inspired by deejays like U Brown, Nicodemus, Brigadier Jerry and U Roy. Of course I tried to copy my heroes and when Nicodemus saw me doing my thing one day he called me Slim Brown as being tall and lanky, I reminded him of U Brown. Jack Ruby later changed that to Prezident Slim Brown stating he saw a leader figure in me. He told me I was leading by not leading as people just started following me because of my confident demeanor."

How did you get involved with Barry O'Hare (X-Rated, red.) and later the Dutch Runn Records label?
Prezident Brown: "Barry O'Hare came to Ocho Rios as an apprentice engineer. I was introduced to him by a singer called Carol Nelson aka Passion, who was Barry's girlfriend at the time. I used to record for Jack Ruby at Grove Music, but after Ruby passed away (Jack Ruby passed away in April of 1989 after suffering heart problems, red.) I started hanging out with Barry. He was experimenting with a drum machine he had bought, which was still fresh technology at the time and I liked his vibes. Two of my brethren, called Professor Frisky and Shaggy Wonder and myself were close with a man called Courtney Cole who owned the Roof International label. We were pushing him to buy a cutter to press dub plates. At first he was having none of it, but in the end he finally folded and bought the thing. This place became our regular hangout, when one day we saw a European couple in one of these horse drawn tourist carts approaching. Professor Frisky decided to take advantage of the opportunity and offered to cut them a dubplate including their names. The man turned out to be Guido Delvoux and that's how the whole link up with Runn Records got started. Big up Runn Records every time!"

After albums like 'Generation Next' (Chet Records, 2003) or 'Common Prosperity' (Tomorrow's Children, 2009), 'I Sound Is From Creation' (Tad's Record, 2012), seemed a return to the old school Prezident Brown everyone loved?
Prezident Brown: "Yeah, I would say that's about right. As an artist you go through changes and you're influenced by your surroundings and whatever is happening in your life at that moment. I like to play different kinds of music and I'm always open to try new things, but I also realized I shouldn't lose sight of where I came from. I started as a mix between U Brown, U Roy and Josey Wales and on 'I Sound Is From Creation' I also integrated some influences from some of my favorite artists and bands in reggae music, like Steel Pulse for example, who have been a huge influence (for 'Sorrow & Joy', a duet with his great example U Brown, Prezident Brown used the riddim of Steel Pulse's 'Worth His Weight In Gold (Rally Round)', red.)."

How did you link up with Axx Of Jahpostles?
Prezident Brown: "Well, even though the past few years I haven't been coming to Europe, I've toured extensively in the US and all that time Devon Bradshaw, bass player with Axx Of Jahpostles, was always my band leader. Over time we became really good friends."

How and when did Rastafari find you?
Prezident Brown: "In all honesty it was there for the longest time and I just didn't realize it! As a kid I already manifested certain characteristics - politeness, intuitiveness, comforting - that in hindsight made me conclude Rastafari was already present in I&I from the beginning. It's just that getting involved in music I reached a crossroads at one stage - cause I still used to trim in these days and could easily pass for a cop or a soldier (laughs) - where I felt I had to make a choice what image I wanted to put out there and for me I felt that had to be Rastafari. That being said, for me it's Rastafari, but Buddha, Allah, Jesus, it's all the same thing. It's all about one love and out of one come many things. Just love each other as human beings and the rest will follow. Rastafari!"

In closing, could you summarize yourself and what you're about in a few words?
Prezident Brown: "I man nah tricky nor slicky; I'm a lover, I'm a liver, I'm a giver! Prezident Brown plays country reggae, innocent uplifting music! I&I music is all about edutainment; trying to inform and inspire, but always entertain!"