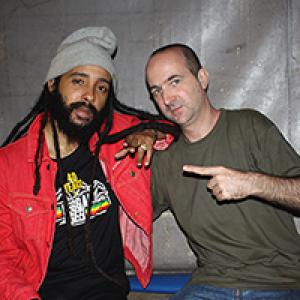 Protoje, the title of your new album begs the question: 'A Matter Of Time' for what exactly?
Protoje: "For everything… For the truth to be revealed, for whatever that is to come your way to come your way. If we all keep living the way we're living, it's going to end in total chaos, so it's also a matter of time before we as a human species get what we deserve."

You once again joined forces with Phillip 'Winta' James. Was that already a done deal after releasing 'Ancient Future'?
Protoje: "I already knew after we did 'Ancient Future', that there had to be a follow-up, because there were things we wanted to achieve but didn't get to on the first album, like sounds he wanted to try that sounded more creative than the ones we used on 'Ancient Future'. It was just a natural progression to do another project together."

You already called 'A Matter Of Time' the most experimental album you did so far, but it's still undeniably you.
Protoje: "Well, I'm always going to be me, you know, but I aim to make each new album my most experimental to date, because I like trying new things. 'Bout Noon' and 'Blood Money' are good examples, as they don't have that traditional reggae vibe going but still have a feel I can really dig."

You're known for being a real movie buff. Would you agree when I say that 'A Matter Of Time' has soundtrack-like qualities in places?
Protoje: "As it happens I wanted 'A Matter Of Time' to sound like a soundtrack, so I'm glad to hear you picked up on that. I wanted the album to sound as cinematic as possible to give listeners the impression they were getting the same experience as watching a feature film."

Something that perhaps not all of your fans will be aware of is the fact one of your great examples in music was the late Hugh Mundell.
Protoje: "Yes, Hugh was simply amazing… As it happens we share the same birthday, June 14th. I just think he was special and his music always put me in the right mood. That's also the reason why I watch a lot of movies, because a good movie will always put you in a certain mood and brings emotions to the surface. The same thing always happens when I listen to Hugh's music."

You also used quite an untraditional photo for the sleeve of the album. What was the idea behind that shot?
Protoje: "The idea behind the photo is someone going out to see, waiting for a ship to come in, again referencing to the title of the album, 'A Matter Of Time'. That shot was actually a behind the scenes photo that my photographer (Yannick Reid, red.) took without my knowledge. He was just experimenting with his drone, shooting some aerial shots, but when I saw the photo, I immediately knew I wanted it for the cover of the album."

I called 'A Matter Of Time' a creeper; you have to give it a couple of spins before the music really hits you and you realize what a great album you're listening to. Once again 'A Matter Of Time' one could say…
Protoje: "Yeah, if you're a real reggae head and you listen to 'A Matter Of Time' for the first time, I wouldn't be surprised if it would be a little bit off-putting, because in all honesty this isn't the kind of music you'll usually be getting from a reggae artist. But as you say, after a couple of times it's going to click and then you'll be like: "Wow, this is great!". That's exactly how we intended it to be, as I believe that is what gives an album longevity. It's definitely a creeper, but believe me that's the best kind of music! In fact Rodigan told me the same thing. When he heard 'Bout Noon' for the first time he wasn't too sure, but after he'd played it a couple of times he started to love the track and even ended up calling it amazing at one point. It's all about trying to keep things fresh, so that new generations of listeners can also connect to the music!"