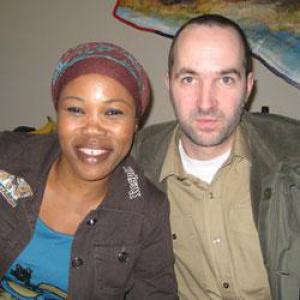 Queen Ifrica, the album opens with a nyahbinghi track called 'T.T.P.N.C.', a tribute to the Pitfour Nyahbinghi Centre.
Queen Ifrica: "Yeah, the Pitfour Nyahbinghi Centre is the Rastafarian community I grew up in. In the Nyahbinghi Centre celebrations are held to celebrate important occasions; on the earthday of His Imperial Majesty, for example, a twelve day nyahbinghi session is organized each year where Rastafarians from all over the world gather to give praise. Having grown up in that community myself, I thought it would be fitting to give something back as they are largely responsible for me becoming the person I am today. I got the elders to go into the studio with me, something they will normally never do, and record the song with me."

Now that your musical career is taking off and you're travelling all over the world, don't you ever miss that simple life you were used to growing up in the Rasta camp?
Queen Ifrica: "Yes, I certainly do miss that at times, but at the same time it's an identity I always carry with me, so that provides a certain amount of comfort. I do miss taking part in the nyahbinghi session, though, and just to get that feel I tend to listen to 'T.T.P.N.C.' every so often. (laughs)"

At first glance, the title track of the album, 'Welcome To Montego Bay', sounds like a tourist commercial for the city, but in actual fact it's a harsh critique.
Queen Ifrica: "Yes, it absolutely is! Montego Bay is the Mecca of tourism in Jamaica; it has beautiful beaches and multiple luxurious resorts, but the sad reality is that there are communities that are only a stone throw away from these resorts, where the people don't benefit from that mass tourism at all. A lot of the people coming to Jamaica don't even want to be in one of these all-inclusive resorts; they want to go and explore the island and discover what Jamaica is really all about. Even though the Tourist Board wasn't too happy with it, I got a lot of support from the local people from Montego Bay."

The song 'Don't Sign' is a warning not to agree to a contract without knowing what it is your signing. Your new album is distributed by VP Records. Did you listen to your own advice?
Queen Ifrica: "(laughs) Actually, that song was written by Tony Rebel and it's really talking about a relationship between two people, stating that it takes at least 100 days to get to know each other. I guess it can also be interpreted as a warning to be careful before you make decisions that can seriously impact your life; it's always good to think twice."

And then there's 'Daddy' of course, a track that hits the listener as a bombshell. What provoked you to write that song?
Queen Ifrica: "I take a different approach to song writing and I prefer to write about real things. In this case, if I'm going to address a topic like incest, I'll try to paint a picture on what incest is really like and I want my listeners to believe what I'm singing about, almost as if it really happened to me. A lot of debate preceded the release of 'Daddy' because we had to take into account the possible repercussions the song could have and also there was my father, Derrick Morgan, to consider. He was actually the first person I confronted about the song, but he expressed he was cool with it, so I decided to go ahead. The first version of the song still went: "Daddy, don't touch her there...", but that just didn't sound right to me so I changed it to the first person and became that little girl the song is talking about. Through the charity work we did with Flames Productions over the years, I had become well acquainted with the victims of this sort of abuse. Since the song has been released, I've been invited to about every school in Jamaica to talk about the subject and I see girls bursting into tears every single time, some even taking me apart and telling me their own gruesome story. I think the song is banned in Jamaica, though, because it's not played on the radio. It's played in the dances though, and I've got many people come up to me and thanking me for putting it out and addressing the problem; even legislations now have been passed (the Sexual Offences Bill was passed in September 2009 and reforms and amalgamates the various laws relating to rape, incest and other sexual offences, and will repeal the Incest Punishment Act, as well as several provisions of the Offences Against the Person Act. It also provides for the establishment of a Sex Offenders Registry, which will maintain a list of sex offenders, red.), implementing stricter sentences for perpetrators of these kinds of crimes."

For the cover of the album, you chose a picture where you pose in front of the Sam Sharpe memorial in Montego Bay.
Queen Ifrica: "Yeah, Sam Sharpe is the icon of Montego Bay. He was a Christian pastor who started the slave rebellion (Sam Sharpe was a Deacon at the Burchell Baptist Church in Montego Bay, but spent most of his time travelling to different estates in the St. James area, educating the slaves about Christianity and freedom. In the mistaken belief that emancipation had already been granted by the British Parliament, Sharpe organised a peaceful General strike across many estates in western Jamaica at a critical time for the plantation owners: harvest of the sugar cane. The Christmas Rebellion or Baptist War began on December 25, 1831 at the Kensington Estate. Reprisals by the plantation owners led to the rebels burning the crops. His peaceful protest turned into the Jamaica's largest slave rebellion, killing hundreds, including fourteen whites. The rebellion was put down by the Jamaican military within two weeks and many of the ringleaders, including Sharpe, were hanged in 1832, red.) and defended what he thought was right. We thought it was only fitting to do the photo shoot in Sam Sharpe square, because it represents what the city is really all about. You know you're in Montego Bay when you see Sam Sharpe!"