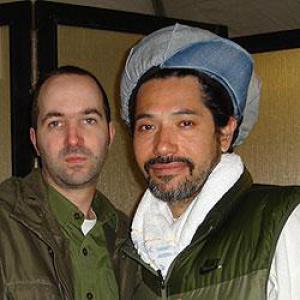 Quique, even though your name might sound fresh and new to the people in Europe, real reggae fans might still know you from your time with Gondwana, a well-known Chilean reggae band. How did that story start for you?
Quique Neira: "I started performing almost twenty years ago with a band called Bambu. We eventually did two albums together and I really learned a lot in those first few years. We were still very young and immature at that time though, so the band didn't last all that long. Gondwana already existed at that time and it was a band we often played together with. As it happened, just after I left Bambu, the singers of Gondwana also left the band, so they were looking for a new vocalist and I stepped in. The experiment was quite successful as after only a few months we landed a record contract with RAS records. As I said, Gondwana was already around for about ten years before I joined them and I was the eight lead vocalist in the band. With Gondwana I recorded a number of albums, not only as a lead vocalist, but also writing the songs and arranging and producing them. That's just the kind of person I am; when I get involved in something, I really give it my all. I ended up staying with the band for six years, but I was experiencing a growing feeling of dissatisfaction. We were very successful with Gondwana, but somehow this success took the edge off for me and I need things to stay exciting and unpredictable for me to be able to invest all my energy. When you do reggae music, you have to feel connected to what you are saying on stage or in your songs. That's why in 2002 I decided to call it quits and focus on starting my own solo career and in 2003 I already released my first solo album, 'Eleven'. Gondwana is still around, but these days I'm not really in contact with them anymore."

You're called Quique Neira...
Quique Neira: "Yeah, that's actually my real name. The "quique" (lesser grisson, red.) is also a little energetic animal from the family of the nutria (or coypu, red.) that lives in Chile. Quique is also short for Enrique, which is my full name. My grandfather, whose name was also Enrique, was known as Quiquo and my father who was also called Enrique, went by his full name; so to avoid confusion they decided to call me Quique instead. Nobody ever called me Enrique. When I started my musical career I decided to keep on using the Quique name, as I've never been really fond of stage names. I don't feel like I have to hide behind some kind of mask. People want to experience something real when they come to see an artist play."

I noticed that it's just as easy for you to switch over to a Rolling Stones riff when you're playing on stage. That and the fact you called your latest album 'Jah Rock', hints that that's where your musical roots are.
Quique Neira: "I consider myself a reggae artist, but as I also have Latin blood running through my veins, so I've written quite a number of tunes in many other styles as well. The only music that can make me go on stage though is reggae; I really wouldn't feel comfortable playing other styles live. That being said, I think the kind of reggae I play is somewhat rock-influenced. Of course 'Jah Rock' also refers to the solid foundation that Jah is; he is the rock that you can lean on. For me, becoming a musician was like a leap of faith. I always got good grades in school, so everybody was always kind of expecting me to go on and become a lawyer or a medical doctor or something, but I knew my future lay in music. I made a vow to Jah always to chant his name if he helped me attain my goals and here I am today."

The music you play is conscious music, roots music. In reggae that means that the philosophy of Rastafari is never far away.
Quique Neira: "I think almost every individual on this earth carries deep inner questions within and I believe these questions need to be answered at least once in your lifetime. Finding answers to these questions will give you strength and the courage to move forwards in life. Personally I've found these answers through the Rastafarian philosophy. It doesn't really matter what you look like and where you're from. God is for everybody and you should feel comfortable calling him by whatever name you prefer; for me that's Jah Rastafari."

We're in full World Cup craze right now; King Football is ruling the world. You're from Chile, which is a football nation as well, and you play a little yourself. Reggae and football always seemed to have been linked somehow, do you agree?
Quique Neira: "Well, first of all I have to say most South-American people, myself included, just can't live without football. Argentina and Brazil, both South-American nations, are among the leading football countries in the world, so their influence is huge. Chile organised the World Cup in 1962 and the oldest club (The Valparaiso Football Club, red.) was already established in 1895, so there's a lot of history there. Being in a band is in many ways similar to being a member of a football team; every individual in the group has his own part to play to make the team function as one unit. With my band, the Jah Rock Family, we see each concert we play as a match we can win or lose because, just as in football, in playing a concert somewhere there are a lot of unknowns, factors you cannot control.  And football, just as music, is a unique way to unite the people and as music does, it provides even the poorest a chance to escape the ghetto."