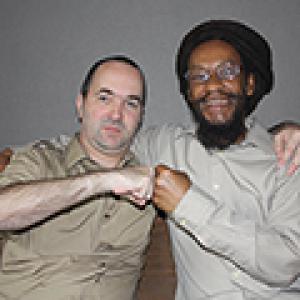 Ras Midas, I know you were in part raised by your grandmother. How big of an influence has she been?
Ras Midas: "Well for starters, my grandmother taught me a lot about my history and roots. On a spiritual level she introduced me to Egyptian and Ethiopian spirituality. Early on she also discovered my musical talent and took it upon herself to give me the attendance and encouragement I needed to develop myself."

I believe she was also a member of the Garvey movement?
Ras Midas: "That's correct; my grandmother was indeed a proud Garveyite and even was personally acquainted with him. Apart from that she was also of Maroon descent and deeply involved in the concept of Rastafari. She was close with Leonard Howell and knew Archibald Dunkley as well. She never told me Rastafari was a religion; to her it was a conscious and cultural revolution with a spiritual, ideological and mental side to it intended to bring about change within yourself and develop yourself independently."

At the tender age of 13 you moved to the UK. Did you experience what you'd describe to be a culture shock?
Ras Midas: "I wouldn't necessarily describe it as a culture shock, maybe "systematic shock" would be a better description. At the time when I migrated to the UK, Jamaica was still an English colony, so we had some idea of what life in England was like. Not that I really had a choice in the matter; my grandmother had passed away and being underage, I had to migrate to join the rest of my family who were living in the UK. The thing that shocked me the most was the racism and discrimination migrants like me were faced with. It was the era of Enoch Powell and the National Front with racist skinheads targeting colored people left and right. Time and time again throughout history when times get rough economically, people find scapegoats to blame and back then it were immigrants from the Caribbean and Asia."

When did you starting involving yourself in music?
Ras Midas: "It was not much after I arrived in the UK. A friend of mine introduced me to Harry J who was in the UK on business. I sang him a few songs and he told me I still needed to mature a bit and work on my singing. Two years later I travelled to Jamaica, and auditioned for him a second time; this time he was pleased with what he heard and one of the first tracks we did together was a tune called 'Kude-A-Bamba'."

In 'Kude-A-Bamba' you sing in English but also in Swahili. Where exactly did you pick that up?
Ras Midas: "Well it wasn't really much more then the title of the song, which was an expression that I learned from my grandmother who was a descendant of the Ashanti people in Ghana. She told me it meant something like "love of the common people". The song was about the community I grew up in. Now it so happened that when I was recording this song at Harry J's, Chris Blackwell passed by. Harry asked him to have a listen and Chris liked what he heard, but suggested we had the complete song translated in Swahili. That's exactly what happened, so in the end I voiced two versions, one in English and one in Swahili. As you probably know, that last version really took off in Africa."

As a result you were able to tour in Africa, which was still a big thing back in those days.
Ras Midas: "Right, because back then only well-known reggae artists like Jimmy Cliff, Bob Marley or Desmond Dekker had toured in Africa. Getting that chance at only sixteen years of age was a great opportunity for me. In Africa I even became known as the 'Kude-A-Bamba'-man for a while! (laughs)"-

A similar thing happened with a song called 'Too Long In The Wind/Tout Longtemps Dan Le Vent', which you partly voiced in French, thus launching your career in France.
Ras Midas: "What happened with that song is that in 1979 I signed a contract with a French company called Disc A-Z. On my 'Rastaman In Exile' album I'd done a song called 'Too Long In The Wind' and my manager suggested I'd redo it in French so he could also market me in France, the French Caribbean and French speaking countries in Africa. The result was similar to what I'd experienced with 'Kude-A-Bamba' and 'Rastaman In Exile' is still my best selling album to date."

In your opinion, what set that particular album apart from the rest of your discography?
Ras Midas: "For starters I think it featured song that carried the right lyrics for that particular time and more or less the same goes for the compositions and the musicians I collaborated with for the album. Apart from that it was promoted well and got great distribution, so all things considered I guess you could say that for that album it was as if the stars had lined up."

And what about that iconic sleeve design, picturing you as a kind of prophet holding stone tablets reminiscent of a black Moses of some sorts?
Ras Midas: "In truth, when they first talked to me about that sleeve design, I didn't really like the idea. In the end I warmed to it and I have to admit the end result turned out really great."

Like so many reggae artists of your generation, you had your fair share of problems with producers taking credit for your songs and running away with the subsequent royalties. Did you never contemplate chucking it all in and doing something completely different with your life?
Ras Midas: "Not really, no. I was born with this talent and music has always been very important to me. And I simply don't allow others, wither it are producers, promoters or what have you, to obstruct me in my musical vision and journey. Being able to write lyrics that can touch people all over the world is a powerful thing and not something you can abandon just like that. That being said, I have to add in all honesty that throughout my career I only had real problems with one producer (hints at Harry J, red.). As a young aspiring artist all you want to do is focus on your music and putting it out there whatever the cost, but in the end music also means business and that's where I, like so many others, made some errors in judgment. Don't get me wrong, my experience with Harry J wasn't all bad; in much respects he treated me better than most other producers in Jamaica treated the artists they worked with. The only thing he always insisted on was sharing the credits of the songs I recorded for him."

At one stage you relocated to the US; what prompted that move?
Ras Midas: "At that time I wanted to try and get a foothold in the American market and when I was offered a record deal by A&M Records I flew over there. They wanted to rerelease my 'Rastaman In Exile' album and offered me a deal for three new albums as well, but when push came to shove they wanted me to water down my music. I'm not the kind of artist to go for that, so instead of signing with them I decided to start my own record label JML Records and I've been producing and releasing my own material ever since. My music is about humanity: how can we as human beings living on planet earth learn to live together in love and respect for one another. At the end of the day it's not about religion, politics or the interests of multinational corporations; it's about you and I and the way we treat one another."

Keeping your family background in mind, have you never contemplated migrating to Africa?
Ras Midas: "To be honest, I've considered doing that several times over, but I feel many African nations still don't assume the responsibility of independence; in many ways they are still waiting for the Europeans or more recent the Chinese to come and help them out. Before we living in the diaspora can contemplate a return to Africa, a foundation should be laid for us to build on and at present that is far from true. I'm not prepared to settle in a dictatorship or in the middle of some tribal or religious issues. Also the fact wither you're accepted over there or not still seems to depend far too much on the money that you have to spend. On top of all that the Western World still exercises a sort of post-colonial power over many of the African nations. In my view Africa needs to reeducate itself and once again steer a united pan-African course."

You're known for having a somewhat peculiar and personal stance on the Rastafarian philosophy.
Ras Midas: "Well you see, some people try to turn Rastafari into a religious concept and where I'm concerned spirituality is different from religion. To me spirituality equals reality, which in practical terms trying to harmonize yourself with all the positive energy in creation. Unfortunately some Rastafarians can't seem to get beyond religious dogma. Being stuck in that way of thinking means you're not evolving and not evolving means you're not being productive. Rastafari was never meant to become a religion; it was a mental, a cultural and a psychological revolution or evolution from British colonialism. It was meant as a means to clean up yourself from the inside out and start over in a different manor with a new concept and a new aim. Everyone in Jamaica still wants to become a reggae artist, but what we really need is doctors, engineers, lawyers and so on. That's the only way we as a people will evolve. The foundation of Rastafari has been laid; the question that now needs to be answered is: "What are we now going to build on that foundation?". If you really want to free yourself from the chains of Babylon you have to thing in economic terms. And again, as His Majesty told us: "The key for the betterment and completeness of modern living is education!". In conclusion: words without works is vain imagination and faith without works is imagination (reference to James chapter 2, red.), meaning that you have to put your words into practice!"