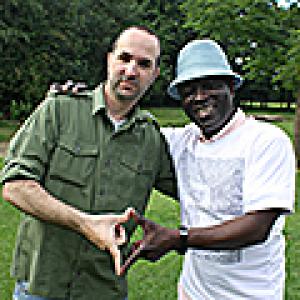 Rod, together with Barry Brown and the illustrious Johnny Lee, you started out in a band called The Aliens. How did you guys get together?
Rod Taylor: "Barry and I, we both used to go to the same school, but we used to hang out at Sugar Minott's place, the location that would later become known as Youthman Promotion, and that's where the whole Aliens thing got started. It didn't last too long though."

Having worked with him, how do you remember Barry Brown?
Rod Taylor: "I remember him as someone who was really into his music. Barry used to do a lot of recording work for Bunny Lee and when I was invited to voice a song there ('Garden Of Eden', red.) they mistook my voice for Barry's and put his name on the label. Our voices were very similar on stage."

After The Aliens disbanded, you embarked on a solo career.
Rod Taylor: "One of the first things I did when I started performing as a solo-artist was enter a talent competition at the Bohemia Club in Kingston, owned by Mr. Hamilton. I performed The Heptones' 'Sea Of Love' and managed to win the competition. That night I met Ossie Hibbert who invited me to come to Channel One to voice some tunes. A few weeks later I ended up recording 'Every Little Thing' and 'Bad Man Comes And Goes'. From Ossie Hibbert I moved on to recording for Bertram Brown's Freedom Sounds label. It was actually Earl Zero who introduced me to him. For Bertram I did 'In The Right Way', 'Don't Give It Up' and 'Ethiopian Kings' backed by the great Soul Syndicate band. These songs all became hits and really launched my career."

The list of producers you worked with is nearly endless. From all of them, who would you say managed to capture the true essence of Rod Taylor?
Rod Taylor: "I guess that would have to be Bertram Brown and Michael Campbell, also known as Mikey Dread. Mikey Dread used to work for JBC (Jamaica Broadcasting Corporation, red.) and in those days I hung out with people like Earl Sixteen, Pam Hall, Edi Fitzroy and Sugar Minott. Mikey could make sure your tunes were heard all over the island, so he definitely didn't steal his nickname of 'Dread At The Controls'!"

At one stage you followed your heart and moved to France, where you've been living for over twenty years now, I believe?
Rod Taylor: "I don't want to go into too much detail, but my wife, who passed away in 2011, was French. We had three children together, who were all born in France."

When you first arrived in France, did you have to adapt yourself a lot or did you blend right in with the French lifestyle?
Rod Taylor: "It was quite hard in the beginning, if only for the reason that I didn't speak a word of French. I dedicated myself to learning the language though and these days I can get by. In my opinion it's essential you learn to speak the language of the country you're living in!"

All these songs you mentioned earlier were eventually rereleased by the French Patate Records label (1999's 'Ethiopian Kings 1975 - 1980' and 2007's 'Garden Of Eden [1975 - 82]'). How did that whole relationship start?
Rod Taylor: "Someone had told Pierre, the owner of Patate Records, that I was living in Marseille and gave him my contact number. He called me, asking if I was really the Rod Taylor he was looking for as he was still doubtful. When we finally met in Paris, he was overjoyed and proposed to do a compilation of some of my older songs. It's one of his biggest sellers to date."

As a Jamaican living in France, why do you think France has become the beating heart of roots reggae in Europe?
Rod Taylor: "Well, the seeds were of course sown when reggae legends like Bob Marley and Jimmy Cliff started coming over to perform in Europe, but the French didn't just start to copy Jamaican reggae, they developed the genre into something of their own. People like Pierpoljak and Raggasonic, Massilia Sound System and Danakil all play reggae, but are also undeniably French. And because they have a whole scene of their own, the door is also open for Jamaican artists to come and perform there."

With 'His Imperial Majesty', you wrote what has become one of the iconic Rastafarian anthems. When did Rastafari come into your life?
Rod Taylor: "Once again that was Mikey Dread. Mikey was a true rastaman and even though I already had sympathies for the movement ever since I was a youth, he really opened my mind to what Rastafarianism was all about."