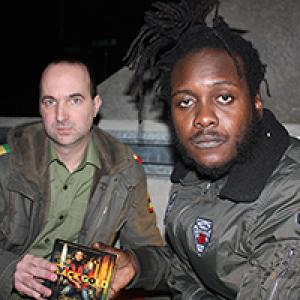 Samory, I know your mom is in the Adventist church, so I'm guessing that's also where you got your first taste of singing. When did you become aware of the fact it was a talent that could offer you a career in music?
Samory I: "I always knew I could sing, a blessing I got from the Most High through my mother, because she can sing as well, but I never contemplated on making a career out of it. At that time I didn't really have a message I wanted to share yet either. As every ghetto youth I just wanted to make my mother proud, so eventually I took that as my motivation."

I believe I'm correct in stating that everything changed when you ran into Bridgett Anderson, who's now your manager, but also much more than that.
Samory I: "Yeah man, she's my second mother! Whenever I'm on the road, she's like a protecting mum to me. She's toughed the storms and bad weather with us, and no matter what we went through, she went through it with us and gave us encouragement. I think she's the strongest person on our team, so big up Bridgett and, yeah, she's definitely more than just a manager, she's a mother figure, not just to me, but to the entire crew!"

Bridgett when you crossed paths with Samory, what called out to you? Why him?
Bridgett Anderson (manager): "Well, when I met him I didn't even know he could sing. He was hanging out at my house fooling around on the computer with Earl 'Chinna' Smith's daughters and at one point Susu (Neosulaan Smith, red.) asked him: "Toure, how come you're not singing?", when suddenly I hear this voice doing a rendition of John Legend's 'Ordinary People' and I was just blown away. I decided then and there to take a chance on him and took him to producers like Sly & Robbie and others, but I have to give kudos to Rory Stone Love, because he was the one who put his money where his mouth was and the end result is now 'Black Gold', a really successful combination of a beautiful voice, excellent production work, and a great message. In my career I've only ever represented artist who had a spiritual base (like Garnet Silk for example, red.). Therefor it will come as no surprise when I say that my favorite track on the album is 'There Is A Spirit', which has a message I believe really resonates with people; we need to find that spirit within our souls to have us move forward and let Jah take control!"

Samory, Before you started collaborating with Rory Stone Love for what eventually became the 'Black Gold' album, there was already an album produced by Niney The Observer in the making. Why did that never manifest?
Samory I: "What happened is that we worked on that album for about four months, but then Niney left for the US, and since he kept postponing his return to Jamaica, in the end I got frustrated waiting on him to be able to finish the project. At this point I had a clear message in mind I wanted to relate to Jamaicans young and old, so I didn't want to wait any longer. It came to the point where I just wanted to give up on music altogether, but fortunately Bridgett then came on my path, she introduced me to Rory and the rest is history!"

'Black Gold', the result of your collaboration with Roy almost feels like musical magic happening. How did you experience that creative chemistry between the two of you?
Samory I: "When two persons are on the path to do the same thing, working together becomes very easy… I brought my Bible, I brought prayer to the studio, and that was just what Rory felt the place needed as well, so we also formed a spiritual connection allowing us to take the recording sessions for 'Black Gold' to a whole other level."

The first song you guys did together that really started making an impact was of course 'Rasta Nuh Gangsta'; the inspiration for that tune being a rather tragic event I believe?
Samory I: "At one point my sister in law, who was pregnant at the time, was gunned down just because she happened to be on a motor bike with my cousin, who was a rudeboy wanted by some local gunmen… My first gut reaction was revenge, but after reasoning with Rory and Kush McAnuff, they persuaded me that being Rasta and taking revenge where two things that didn't go together, so instead I decided to take those feelings and poor them into a song and that's how 'Rasta Nuh Gangsta' came about."

With 'Is It Because I'm Black' you also opted to do a new version of what's an iconic song in music history, both in the classic reggae version by Ken Boothe, as in the original soul version by Syl Johnson. Didn't you hesitate, tackling a song of that caliber?
Samory I: "I never hesitated, no… As soon as I heard the first notes of the song, it spoke out to me and touched my heart. I felt the pain that it was communicating, as it's the same pain and struggle every black man goes through in life, and that made me confident I could record a strong version of my own."

Bridgett, if we consider the coming together of Samory and Rory, symbolized Samory's musical coming of age, then I think we have you to thank for his spiritual development.
Bridgett Anderson: "Yeah, I think I would agree… In life you have the physical and the spiritual, and when the one leaves the other we get off balance. In terms of production and what have you, I don't even like to go in a studio, but I manage Samory on a personal level… I hooked him up with a great producer, linked him with a great songwriter, who's also his roadie (Dave Clarke, red.), and through the help of the Most High we found Luis (Ribeiro, Jah Live, red.), who is our tour manager, driver, booking agent and a real gem of a person. What's very important when you're doing this type of work is that you always realize it's not about you; it's about spreading Jah glorious words and work. In an era where the world is in so much turmoil, we simply need music like this to replenish our spirits. You know, the powers that be don't really care for this kind of energy and will do anything to nip it in the bud, so if you're a messenger like Samory I and you don't have the right people around you, you'll soon get lost or swallowed up into trivialities of life around you. Being a conscious musician in these times is like being a soldier trying to stay alive on a battlefield. If you want to stay alive you'll definitely need the protective armor of the Most High. To me it's not about show business, it's about soul business as what we try to do is gather souls for the Most High!"

Samory, in conclusion… Your parents endowed you with a name (Samory Toure Fraser, red.) referring to a legendary Samory Toure, founder of the Wassoulou Empire in what is now Guinea and a fierce opponent of French colonial rule in West Africa. It's always said the name you carry is like a totem. Is that also how you feel about yours?
Samory I: "My father told me that reason why he named me Samory Toure was because he saw that within me he could see himself, and through that he saw the early makings of a great man. I have to carry that name proudly, but unlike the original Samory Toure I'm not out to fight actual wars or revolutions, my goal is to calm the storm, to settle the war; that is my true aim as Samory Toure. We might carry the same name, but walk different paths. Blessed love!"