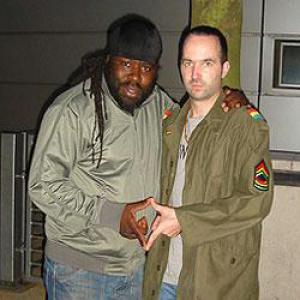 Solo, along with most people I got to know you when you released the 'Walk Like Rasta' clip on YouTube, accompanied by that hilarious mockumentary about Gangsta Ras. How did that whole project come about?
Solo Banton: "I found it important to highlight what the song was about (certain artists boasting a gangster as well as a Rastafarian image in the hope thus reaping the most financial benefits from their music, red.) and in my opinion, getting a message across is always easier when you do it in a funny or happy way. If you keep the children in a classroom smiling while you're telling them something, they will retain the information far easier. I like to laugh anyway, so when Kris (Kemist, red.) and I sat down to write the storyboard for the main clip of the song, where Gangsta Ras makes an appearance in the intro, I was still in character and jokingly we continued filming this so-called interview. We felt the result was so good we wanted to put it out there along with the clip to the song."

It was refreshing to hear a conscious artist finally speaking up on that topic. One could argue if it's really that big an issue?
Solo Banton: "Well, it hurts me and that's why I had no problem speaking up about it. It actually surprises and shocks me that nobody's seen fit to speak up about it earlier. Maybe that's not entirely fair; because a few artists have done so, but I'm still surprised it's not condemned more. Rastafari is a very serious matter for me and this kind of portrayal really hurts me. Also, it makes absolutely no sense to me. To me, this kind of behaviour is on the same lines as a Catholic priest interfering with children. It's trying to console two complete opposites, which at no time can be acceptable."

Speaking out about a topic like that of course means your own character and morals will become the subject of scrutiny.
Solo Banton: "Yeah, I've absolutely experienced that. Not really that much to my face though, which already says a lot. When someone is afraid to utter criticism in your face, it's usually the cowards approach and it means the person attacking you doesn't have much legs to stand on anyway. The thought of not doing the song because I might get criticized afterwards never even crossed my mind. I believe what I'm singing in the song and it needed to be said. Even though not everybody will agree with what I'm saying, I'm free to utter my own opinions and I intend to keep expressing them without fear and apology in the future."

Were you surprised about how quick the buzz about the video spread on the internet?
Solo Banton: "Yes and no. I was surprised, because it's always surprising when you put something out there and it's greatly received, but at the same time I knew I was saying something that needed to be said and that many people were thinking the same thing."

The new clip for your song 'Rastafari Teachings' is more or less on the same lines. You're stating that a lot of people don't even know the things Haile Selassie stood for and the words he spoke.
Solo Banton: "Yeah, I think it's fair to say that the video for 'Rastafari Teachings' came about off the back of 'Walk Like Rasta'. The criticism of 'Walk Like Rasta' left me with the question: "What is true Rastafarianism then? What does it mean?" and pondering on these questions I started to realise that very few people actually know what His Imperial Majesty stood for and spoke about during his reign. That is one of the reasons why the concept of Rastafari is confusing to a lot of people. In a way I guess you could call this clip kind of a sequel to 'Walk Like Rasta'."

Tell us a little bit about your relationship with Kris Kemist from Reality Shock. How did you guys originally meet up?
Solo Banton: "I got introduced to Kris by Deadly Hunta and Mikey Murka, who said to me there was this guy producing some wicked riddims I should definitely check out. At that time I wasn't singing yet though, but focusing on my work as a producer. We all live in Reading, which is a rather small place, so eventually paths will cross anyway. When I met Kris we clicked immediately and he also encouraged me to start singing."

You just mentioned you were focusing on your production work when you met Kris. When did you start contemplating taking the microphone yourself?
Solo Banton: "Well, I grew up in London and for as long as I can remember I've been taking the mic to chant along with local sound systems. It was only when I moved to Reading about twenty years ago that I decided to pack it in and focus on producing. I still continued writing songs though, sometimes for other artists I was producing. One day I asked Kris to come and play guitar on a track I was producing and just to build up the vibes I got into the voicing room and started to do one of my old lyrics. When I came out of the room both Mikey Murka and Kris were saying: "Solo, you should voice more! Start singing again man!" Eventually I refused to commit, but Kris kept nagging he wanted to record me, so a few weeks later I reluctantly agreed and we recorded a first tune which was 'Herb Story'. For nostalgic reasons I also included that track on the 'Walk Like Rasta' album."

You're also one of these artists that's not afraid to leave the boundaries of roots reggae, having done some dub step tracks as well. How do you reconcile that with the vision you portray in 'Walk Like Rasta'?
Solo Banton: "(laughs) That's a serious question, which deserves a very long answer. I certainly don't believe that being Rasta means you can only listen to roots reggae; it shouldn't be about the music that you listen to. It just so happens that Rastafari is best portrayed in roots reggae music, but being Rasta is a way of life. Personally I've always been a big music lover and I don't have a problem appreciating different music styles. What is important for me though, is the content of the lyrics. Even when I decide to record something on a dub step riddim, all you're going to hear from me is conscious lyrics."

What's your link with Dubkasm?
Solo Banton: "I first linked up with Stryda and Digistep when I went down to do an interview on their radio show (Sufferah's Choice Show, Passion 106.2FM, www.passionradiobristol.com, red.). I just love their vibes; they're really clean-hearted people. It's a bit like my relationship with Kris, call it natural mystic if you like. Strida and I we have the same mentality and the same sense of humour. Their music is really authentic, all recorded by live musicians and not a lot of people are doing that anymore."

What the "Solo" part of your moniker is concerned, there are two stories circulating. The first one states that you got that nickname because you've always been somewhat of a loner, while the second explanation says that you adopted that name as an homage to your favourite Star Wars character Han Solo.
Solo Banton: "(laughs) The truth is actually a mixture of both. I've always been a very single-minded individual. Even when I was hanging out with a group of friends at a sound system night, I would always steer my own course and do my own thing. I'm a big Star Wars fan and at the time with a couple of friends I was heavily into graffiti, so for our tags we all used names of Star Wars characters."

As a representative of Reading, tell us a little bit about the reggae scene in your hometown.
Solo Banton: "Reading has always had a big reggae scene. When I was still living in London a lot of the big dances and clashes would already be held in Reading. A lot of the big London sounds like Saxon and Coxsone have all played in Reading. The most famous club was Central Club, but that has now disappeared. When I decided to leave London, I wanted to go to a place where I didn't know any people and since I knew Reading also had a vibrant sound system scene and wasn't too far from the capital, it seemed like the ideal place."