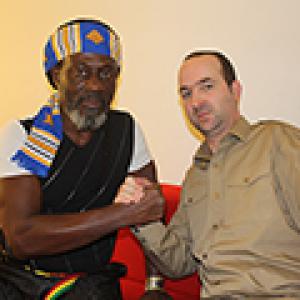 Dehvan, Talisman really started out as Revelation Rockers, but you changed it when you discovered there was already another band out there using the same name.
Dehvan Othieno (vocals & guitar): "The thing with the name change is that back then we were still a young and upcoming band and the other band was already quite established. As we hadn't been going for that long anyway, the band name didn't hold that much weight yet. So rather than fight another band over the rights to a name, we simply opted to change it and move on."

Who came up with the Talisman name?
Dehvan Othieno: "Dennison (Joseph, bass, red.) came up with the Talisman name. If I remember correctly he spotted the name on one of the keyboards we were using at the time; it was the name of a certain model (Italian maker Elgam produced an organ model called Talisman, red.). Since we took that name on it has taken us on in turn, as a talisman is like a good luck charm. The only thing I can say is that wherever we've played, we've always managed to charm the people that came out to see us and in all honesty, I think that's based on more than just our personalities. I think the name actually carries a certain energy."

Even though bands like Steel Pulse, Aswad, Black Roots and yourselves for that matter all have a very distinctive vibe, I think it's fair to say there's also something like a UK roots sound. In your opinion, what sets it apart from its Jamaican counterpart?
Dehvan Othieno: "I think it's the environment in which the music is conceived. You cannot grow up in a certain environment without taking on some of its culture, some of its essence and because the two climates are so distinct… Let me put it this way: as Mutabaruka stated in 'Whiteman Country': "It no good to stay inna white man country too long…". What he meant there is that the longer you stay in a country that isn't yours, the more you start to adapt: from eating the food over watching local television to starting to appreciate the same sense of humor. Just think about it, if you can laugh at a culture's jokes, that means you really have to be a part of it, if not you just won't get it. On top of that the education system in the UK is significantly different and the social environment you live in or grew up in is also completely different. When a Jamaican sings about being from the ghetto, that ghetto is still miles apart from what we over in Europe would consider a ghetto area, and when I write a song I can't write about the poor man's plight down in Jamaica; I have to draw on my own experiences. The climate also plays a significant role; when the sun's out people become more outgoing, friendlier and generally more sociable. In 1990 Dennison and I went to Jamaica to record the 'Jam Rock' album and the songs we wrote over there were totally different to the ones we'd done in the UK. Everything is different over there, from the climate over the food to the smells and even the sounds you hear."

If I would call Talisman a political band, would you agree?
Dehvan Othieno: "Yes, but political with a small "p"; I don't think we were ever party political, but in our music we talked about everyday issues that touched the lives of everyone, so in that sense we were definitely political yes. As soon as you're talking about change, you're basically taking a political stance. If with my songs I could raise questions about certain issues, that was my job done."

'Wicked Dem', one of your songs was even banned for a while.
Dehvan Othieno: "The thing with 'Wicked Dem' was that as a song it was pretty direct and it was the kind of song that was blatantly saying: "Up yours!" (laughs)."

How important would you say was the contribution UK Scientist (Richard Lewis, red.) made to the sound of Talisman?
Dehvan Othieno: "Richard used to be in a rock band called The Groundhogs and also offered his services as an engineer for Zulu PA-system. They were reasonably priced and also offered us their basement as a rehearsal space. We started using Richard as the engineer for some of our shows and there was an undeniable chemistry between him and the rest of the band. He listened to the music and then interpreted it the way he felt it should sound, which in my view is the mark of a great engineer. I think I can now say he was an integral part of Talisman's sound and that's why we also asked him to be the engineer for our debut album 'Takin' The Strain'."

Even though you and Dennison still recorded the 'Jam Rock' album together back in 1990, the real reunion of the band didn't manifest until a couple of years ago. What changed?
Dehvan Othieno: "Well, even though we'd occasionally bump into one another and getting back together was sometimes mentioned, it never really manifested. In my view a lot of that had to do with how the band broke up. The real reason for the breakup was never addressed, there wasn't a debrief so to speak; we simply went our separate ways and everyone took their little frustrations with them. This went on for a number of years until Mike Darby (Bristol Archive Records, Reggae Archive Records and Sugar Shack Records label owner, red.) got hold of a number of Talisman live tapes he wanted to use on a compilation documenting Bristol's reggae history ('The Bristol Reggae Explosion 1978-1983', 2010, Bristol Archive Records, red.). He contacted us wanting permission to use our songs and in one go asked us if we'd be interested in uniting to play a onetime promotional show to launch the album. We weren't opposed to the idea and from there the ball started rolling so to speak. We managed to get the entire band back together, with the exception of Dave Kennard, our original drummer, who wasn't up for it. We did a number of gigs with that line-up, but sadly we were forced to face economic reality - touring with a nine piece band simply wasn't sustainable - and this also caused some of the old antagonism roared its head again, so we had to make the harsh decision to size down the band and these days we tour as a five some."

Has your approach to the music, to being a member in a band changed over the years?
Dehvan Othieno: "I think I would do myself a disservice if I said I haven't changed. I've definitely changed and grown. I don't know if I want to go as far as to say I've mellowed, but maybe I'm not so afraid to speak my mind; whereas before I'd often try to dress things up, now I just speak out. I've reached an age where I don't really care anymore if everyone likes me or not. I don't think we were ever a band that wanted to conquer the world; all we really wanted was some recognition for the work we put out. For me it's always been about being able to put my thoughts to paper - I'm really all about the lyrics - and performing them in front of an audience. As long as I can continue to do that, I'm a happy man!"