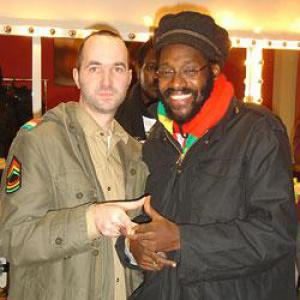 Tarrus, on 'Contagious', you included a version of Michael Jackson's 'Human Nature'. A case of Rastafarian prophecy?
Tarrus Riley: "Well, actually that song was recorded some months earlier, but the album was released close to his unfortunate death. Sadly, he's gone now, but the music still lives on. Musically speaking I admired him a lot; he was an excellent performer and a great example as a singer-songwriter."

Your stage name used to be Taurus (after his astrological birth sign, red.) but you changed the spelling to Tarrus. 'Living The Life Of A Gun', the opening song on ‘Contagious' opens with Joe Lickshot making the comparison between you and the gun by the same name (Taurus is a Brazilian arms manufacturer, red.). Is that the reason why you decided to change the spelling?
Tarrus Riley: "No, I just wanted to spell it like it sounded. I don't fire literal shots, I fire musical ones. That's also what 'Living The Life Of A Gun' is about; in the song I'm putting a personality to the gun, so you have the gun telling you there's no need for guns."

The song 'Start A New' is more than just another song on the album, it's also the name of a campaign you're part of.
Tarrus Riley: "Yes, it's a campaign Yendi Phillips (Miss Jamaica 2007, red.) and I took to the schools to try and uplift the self-esteem of the children there. The slogan "start a new" stands for a new behaviour, a new way of thinking, a new vibe."

Your backing band is called Blaksoil, but it's more than a backing band. What does Blaksoil stand for?
Tarrus Riley: "Blaksoil is a movement; the word is an acronym that stands for Brethren Living According to King Selassie Overstanding and Iritical Livity. It's not really about the colour you know, it's an inner thing."

You're the son of Jimmy Riley (of Uniques and Techniques fame, red.). Has he played an active role in your career?
Tarrus Riley: "He didn't teach me to sing, but he put me into a musical environment surrounded by people like Sly & Robbie, Beres Hammond, Dennis Brown, Delroy Wilson and so on. That way I was able to pick things up very fast. He also always told me to treat the business as a business. I guess you could say he played a proactive role in my career."

Then there's Dean Fraser of course...
Tarrus Riley: "He's like my second father! I really got to know Dean when I was still in high school, at the age of 17 or 18. We used to rehearse at his house."

In an older interview of yours, I found the following quote: "I came into this music as a deejay, I thought singing was boring, I couldn't relate to it."
Tarrus Riley: "For me personally it was because at that time I couldn't relate with that kind of music. I idolized people like Shabba Ranks, Stitchie and Tiger and the real singers were people from my father's generation. I'm an eighties baby, so to me that was just boring. When I learned more about music, I discovered you could use your voice in many different ways and develop your own style. I try to make my music entertaining, but still positive; I want you to enjoy yourself when you hear it, but still learn something at the same time."