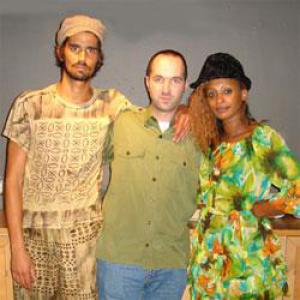 Junior, the whole Terrakota story really started with a trip to Burkina Faso. How did you end up in that country of all places?
Junior (vocals, electric guitar): "Well, we first travelled to Senegal and there we met an old man who urged us to go and check out Burkina Faso. We had first set out to travel to Ivory Coast, but the old man told us we would absolutely find what we were looking for in Burkina and more specifically in Bobo-Dioulasso. That place is in the central part of West-Africa and different cultural influences converge there. The Burkinabès are very contemporary in the way they approach music - check out the work of Baba Konaté for example - so it was very easy for us to identify with that."

At that moment Terrakota was still three guys playing music together. How did you get Romi involved in the project?
Junior: "We returned from Africa with a lot of creative ideas, but to bring them to fulfilment we felt we had to expand the band by finding some extra musicians. We found our previous drummer (Davide Rodrigues, red.) in a squat called Zarabatana in Queluz, a suburb of Lisbon where we used to rehearse. Francesco (Rebelo, red.), our bass player, we knew from playing together with balafonist Kimi Diabate and he introduced us to Romi. Where we were focused on Africa, she introduced a more soulful vibe to our music."

The music you guys play is generally referred to as "musica mestiza". Traditionally, this scene was centred around Barcelona, but you guys being Portuguese I have to ask if there's a mestizo scene in Lisbon as well?
Junior: "I don't think you can compare the mestizo scene in Lisbon with that in Barcelona. That mixing of styles and influences already existed in Portuguese music before the revolution of 1974 (The Carnation Revolution - Portuguese: Revolução dos Cravos - was a left-leaning military coup started on April 25, 1974, in Lisbon, Portugal, effectively changing the Portuguese regime from an authoritarian dictatorship to a democracy, red.), with people like Fausto, Sérgio Godinho and José Afonso mixing in African and Oriental influences."
Romi Anauel (vocals): "You would see that mix less with the fado, but all the more with folkloric styles like Douro, Trás-os-Montes or Alentejo, because the vibe of these styles lends itself very well to mixing with other influences."
Junior: "A very important band in the development of Portuguese mestizo music was Primitive Reason. They were formed somewhere in the early nineteen-nineties and the first Portuguese band to start experimenting with fusing styles like reggae, ska, afro and funk. They were a very mixed bunch with musicians from different countries, so naturally we identified with that. These days, there's a small mestizo scene in Lisbon with bands like Kumpania Algazarra, Katharsis and of course bands like Deolinda or OqueStrada, who are exploring our fado heritage."

Even though there are no obvious links between Terrakota's music and Barcelona, there's always Marc (Planells, red.) who has Catalan roots. He's a true multi-instrumentalist and plays among other things the sitar. Is he the one who introduced you to the more Asian influences that pop up on 'World Massala'?
Romi Anauel: "No, not really, because before Marc joined the band we were already working with another sitar player."

You used footage from your trip to India to make the video clip for 'World Massala'. What came first, the music or the trip to India?
Junior: "Marc came up with the rhythm for the song; he had already spent a lot of time in India and had spent a year studying the sitar with an Indian master. When we were recording the album, we got an invitation to play at the Ladakh Confluence (annual music festival in the city of Leh, capital of the Indian province of Ladakh, red.). To us, this was an ideal opportunity to shoot some footage there and it's that material we used for the clip. When we shot those images the song wasn't even finished, because at that point we only had the sitar rhythm and the reggae bass line."

Are these Asian influences something you are going to explore further in the future?
Junior: "We always use the influences from our trips. In the past, we travelled to Africa several times, this time it was Asia. Maybe our connection with the African continent is just a little bit stronger, because we really fell in love with the culture over there, but since Mark is this huge encyclopaedia on Asian culture, I certainly won't rule out that that could have a bigger impact in the future as well. We also brought tons of material back from India, things we recorded over there and haven't used so far."

'Humus Sapiens', your second album, was recorded in Youssou N'Dour's Xippi Studios in Dakar.
Junior: "That really happened thanks to our former technician, a Frenchman called Dominique Borde. He had already assisted in the recording of several albums of Doudou N'Diaye Rose and knew Youssou as well. When we were calculating our recording budget, we discovered that it would cost us about the same to record the album in Senegal as it would in Portugal, so we opted to add some authenticity to the project and record it in Dakar."

For the clip of the song 'É Verdade?' you received a Portuguese MTV Award. Terrakota doesn't strike me as being MTV material, how did you feel about winning that award?
Junior: "Well, on a promotional level, getting that award wasn't too bad and it was great to see a song like 'É Verdade?', that talks about the use of the media to manipulate the public opinion, being played on national television. For us, that was like a sort of moral victory. The award was more for the guys that made the video, though, a company called Droid-id. After it won the MTV Award the clip was also shown at Fantasporto, the Portuguese festival for fantasy and science fiction films."

Romi, I guess you based the lyrics for the song 'Illegal', a song from the ‘World Massala' album, in part at least, on your own experiences?
Romi Anuel: "True, I already moved to Portugal when I was only two years old, but I've been confronted with these problems all of my life. A couple of years ago, my passport was stolen and because I could not prove my identity, I found myself without nationality. I was neither a Portuguese citizen, neither an Angolan one and had to survive as an illegal citizen for several years. I could not even prove I was the mother of my children. It was a very emotional time for me, but when I wrote ‘Illegal' I didn't want it to be a sad song, but rather one of hope. Strangely enough, I finally got my documents back just a month after finishing the song!"

Is the problem of illegal immigration as big an issue in Portugal as it is in countries like Spain or Italy?
Romi Anauel: "I think it is, yes, but I guess it is still easier to survive as an illegal in Portugal then it is in Spain or Italy or other countries in Europe for that matter. In Portugal there are a lot of Angolans, because it used to be one of their former colonies, and for people from these ex-colonies there is a process in place, allowing them to get the proper papers after having stayed in the country for over six years."

A last question, to end the interview. You're performing a number of concerts in Belgium to promote your new album, 'World Massala', and with Benjamin Tollet you're also working with a Belgian manager. Is there a special connection between Terrakota and Belgium?
Romi Anauel: "I think over time we've developed a special connection with this country, yes, in part of course because we started working with Benjamin. He's a great person to work with and really cares about the band and likes the music we play. You might not realise it, but Belgium is actually a very nice place if you love world music. You've got a lot of world music festivals in summer and the vibe there is really super."
Junior: "Belgium is a very small country, but it has a great diversity in world music festivals and that makes it a great place for musicians like ourselves to meet colleagues and exchange ideas. It would be great if other European countries could follow that example."