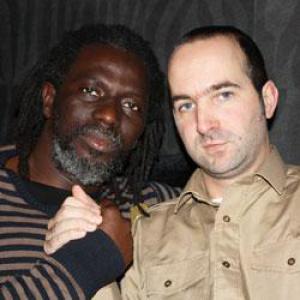 Tiken, for 'African Revolution' you returned to your African roots. Was this a project you had on your mind for some time already?
Tiken Jah Fakoly: "I've always wanted to create a style of reggae that sounded a bit different from the mainstream. As Africans, we have a broad range of traditional instruments at our disposal, so why not use them for playing reggae as well. On most of my previous albums there are one or two tracks where I've used these instruments already, but for 'African Revolution' I really wanted to focus on them completely. I wanted to create an album that would sound completely different from every other reggae album out there and I wanted to surprise my fans as well. I know a lot of people were probably expecting me to come up with yet another roots album full of political messages, but as an artist once every so often you have to freshen things up and that's what I've tried to do with 'African Revolution'."

Is this project a one-off or will you keep on focusing on this sound in your albums to come?
Tiken Jah Fakoly: "It's definitely a one-off, but I wouldn't exclude using these instruments on my future albums. Their sound blends well with reggae and at the same time they provide the necessary originality."

The album has a bit of an acoustic feel, how are you going to translate that to your live shows, which tend to be quite energetic?
Tiken Jah Fakoly: "On stage, we will be using the Mandingo guitar and the kora, but the horn section will still be there as well."

'African Revolution' is also the first album for which you wrote some lyrics in English.
Tiken Jah Fakoly: "Yes, expressing yourself in English has become almost a necessity these days if you're aiming for any kind of international career. French is spoken in quite a few countries as well, but English is still a lot more universally accepted. I also included these two tracks in English because I felt my English-speaking fans shouldn't have to content themselves with just listening to my music, they should get my message as well. It's something I'm going to be focusing on more and more in my albums to come."

Let's talk about some of the songs on the album in particular now. 'Sinimory' sounds like a remake of an old traditional song.
Tiken Jah Fakoly: "Well, almost, it's a musical adaptation of an old folk tale about an orphan boy and his dog. The boy fears his wicked stepmother might be trying to poison him and decides to leave his dog at home whilst he goes off working the fields. Every time the woman prepares a meal, the dog quickly smells it and tells his boss if it's poisonous or not. I turned the tale into a song with which I wanted to pay my respects to the many orphaned children in Africa."

'Initié', which translated means "thanks!", is first and foremost a tribute to your mother who passed away during the recording of the album, but in a broader context it's also a tribute to African women in general.
Tiken Jah Fakoly: "Exactly! It's my way of expressing my gratitude and respect to the African women who still often find themselves trapped in an involuntary polygamous relationship, are disrespected by their husband or treated as if they were house slaves. In Africa, the women are the cornerstone of development, because traditionally they do most of the work. My mother experienced these hardships first hand and that's why I wanted to honour her with this song."

In 'Sors De Ma Télé', you tackle the negative role television can play.
Tiken Jah Fakoly: "Television can have a good role to play as well. There are still plenty of television channels that are educational and informative, but if one starts to use the medium simply to broadcast idiotic nonsense or misuse it to benefit the manipulation tactics of a dictator, then television can become something negative and even dangerous. The song is mainly aimed at certain African leaders who apparently love nothing more than to see their own face on television. When you buy yourself a television set, the last thing you want is to have to stare at the same face day in day out!"

Recently there was an incident at your residence in Bamako. Some sources spoke of an attempt on your life, but what really happened?
Tiken Jah Fakoly: "At the time of the events I wasn't home, because I was on tour in La Reunion. From what I've been told, someone set fire to one of my cars. The police later found a book of matches and a petrol bomb. The inquest is still going on, so I can't really go into more details at this point. The most important thing is that I have to step up the security measures at my house, so I can ensure this won't happen again in the future. My role as an artist is that of conscience of the nation, denouncing the injustices committed against the African people. As a consequence, I'm an easy target. I consider my mission a noble one, though; it's a struggle worth fighting for and I'm fully committed to carry on."

Seen that you've left your native country Ivory Coast because of similar circumstances, does the fact things are now repeating themselves in Mali worry you in any way?
Tiken Jah Fakoly: "As a human being it worries me, yes, because it confronted me again with the fact I have enemies. If you know who your enemies are, then you can still opt to avoid them, but when those enemies are anonymous, the situation becomes more complex and frightening. That being said, I want to add I'm a soldier fighting for his continent and whatever might happen, the struggle has to go on!"