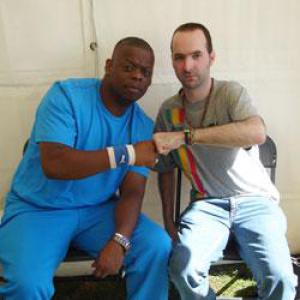 Tippa, performing here in Brockwell Park must be like playing a home match for you?
Tippa Irie: "Yeah, it's a kind of homecoming and an absolute pleasure to be able to play here. I grew up around here, played football in this park, so it's a pleasure to come back and entertain the people I grew up with."

Everybody knows of your connection with Saxon Sound, but your earliest sound system experiences were with your father.
Tippa Irie: "Right, my dad had a sound called Musical Messiah and he used to organise little dances back in the day in the basement of our house. I used to go down there and hear him play records by people like U Roy, Big Youth, Tappa Zukie and so on and I wanted nothing more than to be like those guys. The first sound I checked after I left from under the wings of my father was King Tubby's (King Tubby's hi-fi, red.), which was run by a cousin (Cecil Rennie, red.) of the actual King Tubby in Jamaica. I was with them for about a year or two before Saxon captured me and I went over to Lewisham to join them."

What does Saxon Sound represent to you after all these years?
Tippa Irie: "It's the place where I started my career and it's always nice to be able to come back and do a couple of dances with them now and again."

You're one of the originators of what's called "speed rapping" or "fast talking". How and why did you come up with that style?
Tippa Irie: "That style was originally created by a guy called Peter King, who used to spar with us on Saxon. In Saxon, whenever someone used to come up with a creative idea, all the other mc's usually followed suit. Basically we just wanted to sound different from what was coming out of Jamaica, where you had people like Brigadier Jerry, Josey Wales and Charlie Chaplin doing their thing in a more laidback style. We also wanted to talk about our experiences in the UK and try to create something original."

Your debut album was called 'Is It really Happening To Me?'. In hindsight, was it really happening for you?
Tippa Irie: "At that time it was a blessing, you know; I was a young boy growing up in the community who got a break being able to play on sound systems so I could get my name out there. Then at one stage Greensleeves, a record label working with people like Clint Eastwood & General Saint, The Wailing Souls and so on, expressed interest. For me, this was a very exciting time, because I could hardly believe a record label would be interested in me and that's where the title of the album came from. 'Good To Have The Feeling You're The Best' got into the top ten in the Reggae Charts, 'Tippa Irie And The Cornell' reached number two and then 'Hello Darling' went all the way to number one of course. It was the perfect title for that album."

You're also known for crossing over into other styles and genres. Is that because you want to bring the reggae vibe into the mainstream or more because you're also into these other styles of music?
Tippa Irie: "Well, it's a bit of both really. I just see myself as a musician, so if someone plays me a track and I can feel it; it's easy for me to add a lyric to that. That's also what happened when I worked with the Black Eyed Peas on 'Hey Mama'; I felt that tune, so it was easy for me to come up with something creative. Whether it's punk rock, hip hop or dance, for me it's just work. It's all about feeding my family and paying the bills at the end of the month, but above all else it's about doing the thing I love most."

A dark page in your career was when you lost your sister, Miss Irie, a few years back. To cope with the loss, you dedicated an entire album to her, entitled 'I Miss'.
Tippa Irie: "My sister was an mc as well, so we were very close. I used to write lyrics for her and I try to continue that relationship through her kids now. I try to be there for them and support them the best way I can. They're all doing well at school and her eldest daughter has just finished university and is starting her first job. Their well-being has to be our priority now, but when you lose someone you've been so close to, it's only natural that every so often your mind wanders on what once was. I love her and miss her daily, but her memory lives on through her children and her music."

In 2005, Trojan Records released 'Hello Darling: The Best Of Tippa Irie' a best of compilation of your work. This year you released 'Stick To My Roots'. Is this like a fresh start, a new beginning for Tippa Irie?
Tippa Irie: "Definitely! This is the best album I've done so far and I'm really excited about it. I've worked with The Far East Band, which was an absolute pleasure. Basically they sent me the riddim tracks and I selected the ones I liked, wrote the lyrics and recorded them in my studio. The album is distributed by Cargo Records and for the first single ‘Stick To My Roots' we've just finished shooting a video. I purposely avoided including any duets, because I wanted the album to clearly focus on myself."

You're also an artist that tries to give back to the community as well. I know you've done some music workshops in the past. Is that something you're still involved in?
Tippa Irie: "Occasionally, yes. I often get called by schools or youth clubs. Basically, what I do is set up two double decks and then I try to show the youths how to perform, how to present themselves on stage, how to connect to the audience and so on. For me it's always a pleasure to be able to do that. I also do the odd charity event here and there. With Dr. Ring Ding I went to Kenia recently to support the March Forth Kenia Kids organization (March Forth Kenya Kids uses music, education and the arts to enrich the lives of Kenyan youth living in less economically endowed areas, red.), for example. I try to give back what and where I can."