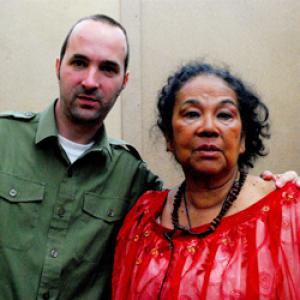 Toto, you were born as Sonia Bazanta Vides, but your stage name refers to the island of Mompox in the Bolívar Department of Colombia.
Toto La Momposina: "Yes, I was born in Talaigua, a village located on the island of Mompox (also known as Margarita Island, red.) in the Magdalena River, the biggest river island in Colombia, counting around forty municipalities. The area is culturally very important because it was the point of entry for the Spanish conquistadors who later introduced the African slaves to the area."

You are of mixed indigenous and African heritage. How did that mix of African slaves with the indigenous population come about in Colombia?
Toto La Momposina: "Originally the pacific area of what is now Colombia was inhabited by the Carib people. They were overrun by the Spanish conquistadores who quickly started enslaving them. When the Spanish started noticing the indigenous people weren't physically up to the slave work they had to carry out, they started introducing African slaves to the area and after a while, both slave communities started to blend together. The mixture of the two cultures is still nicely reflected in the instruments we use in our music, as we inherited the percussion from our African ancestors and the gaita or kuisi flutes (flute made from a hollowed cactus stem, red.) are indigenous instruments. Eventually some free black communities called palenques were established, either by cimarrónes (maroons, red.), runaway slaves, or libertos, freed slaves."

Is your music just of a festive folkloric nature or has it got a narrative function as well?
Toto La Momposina: "In general our music is regarded as festive folklore, yes, but nonetheless the songs we perform talk about our history. In fact my role as a "cantadora" (female singers, who keep traditional music and culture alive in storytelling songs comparable to African griots, red.) consists of passing on our oral history, mythology and costumes from one generation to the next in song."

When I talked to the members of Choc Quib Town, a young band from Colombia's pacific region blending elements from traditional music with hip-hop, they told me they started doing this because they felt traditional music was slowly fading away.
Toto La Momposina: "Well, you won't hear our music on the radio, that much is true, but our music isn't really commercially marketed. Colombia counts some 360 indigenous ethnicities speaking 60 different languages, some of them guarding their heritage better than others. Personally, I'm not really worried that the tradition of the tambores, which we represent, will disappear. As for these youngsters, mixing traditional sounds with genres like pop, rock or hip-hop; I'm not against it, but time will tell if their music will stand the test of time! If you really want to find out about the traditional music of Colombia - torbellino, bambuco, rajaleña, currulao - you'll have to look in the small villages, where people still remember their heritage, not in the big cities. There you will find the so-called "cantadoras de alabaos" ("singers of praise", red.) who sing at funerals and other ceremonies and whose songs reinforce a sense of solidarity, bring the community together, and maintain the traditions of the Afro-Colombian communities. Someone who's been very important in researching and promoting traditional music was Delia Zapata Olivella (1926 - 2001, dancer, folklorist, professor and promoter of the dances of the Caribbean and Pacific Coast Region of Colombia, red.). She not only researched the music, but as a member of Los Gaiteros de San Jacinto (Colombian traditional folkloric group formed in the Caribbean Region of Colombia which have been active since 1940, preserving the traditional rhythms and sounds which are a mixture of the Colombian Indigenous, Spanish and Afro-Colombian heritage, red.) she travelled the world to promote it and that already in the nineteen sixties! Teofilo Potes (1917 - 1975, nicknamed "the master of folklore", Teofilo Pots possessed a profound knowledge of the folkloric traditions of his native Colombia and those of the Pacific Region in particular, spreading his knowledge in publishing's and lectures, but also the formation of various dance groups, red.) and Mercedes Montaño, nicknamed "the queen of currulao" (1912 - 1999, considered the mother of the Colombian folklore of the Pacific Region, Mercedes put all her energy in the preservation of the folkloric traditions of the Pacific Region. Together with Teofilo Pots she formed the Grupo de Danzas del Litoral Pacífico, red.), did similar work."

As a grandmother, it must be great to be able to travel and perform with a large part of your family?
Toto La Momposina: "I really have my mom, who taught most of them the traditional music and dances, to thank for that and I'm now trying to do the same for my grandchildren. I used to live together with my two sisters, so we were a very large family and every weekend my mother would organise a big party where she would teach the children the traditional music and dances. When I see my children and grandchildren perform, I can't but feel proud and I'm sure my mother, who's now in her nineties feels the same. She always told me to keep doing what I was doing as it was my destiny and I believe as long we can pass that feeling along to a new generation these traditions will never disappear. We shouldn't strive for fame; it's the continuity of our traditions which is important, because if for some reason we would lose them, we would lose an important part of our identity."