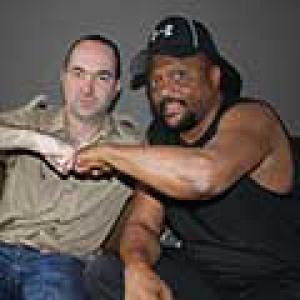 Triston, you recorded your very first tune, 'Love Is A Message', for Bunny Lee at the tender age of eight years old, but I believe it was Soul Syndicate guitarist Tony Chin who was the first one to take you under his wing and mentor you?
Triston Palmer: "Well Tony Chin lived down the street from where I lived. One day I was watching Soul Syndicate rehearse and when they were finishing up I started singing along to what they were playing. Tony heard me and inquired who I was. Someone told him I was a little youth living down the road. Now one evening when I was returning from school he called me over and asked if I felt like joining him to jam in his yard. I just sat down and started singing: "All my girls, got to be A-class girls…", which I later recorded as 'A-Class Girl'. In fact that song and a number of others were much later covered by Big Mountain, an American reggae band Tony worked with for a while. Not much later I joined Sugar Minott and Tony Tuff as a member of African Brothers. We used to rehearse in Maxwell Park or Frog City as we called it, with Tony playing guitar, Sugar singing and me doing the harmonies. I really learned a lot from those guys. As you already mentioned my "big break" came when I did a tune for Bunny Lee called 'Love Is A Message'. Jacob Miller also did a version of that same tune. The tune took off and then I was approached by Ossie Thomas, who also lived in my area and at that time worked for Sonia Pottinger's Tip Top label. Ossie produced 'Spliff Tail' for me. Barry Brown also had a tune over that same riddim, but Johnny Lee, the guy who built the riddim was convinced I could take it further. I wrote the lyrics to that tune in about twenty minutes, just before heading into the studio, but as I was doing my first try-out I noticed the people outside of the recording booth were immediately going crazy over it. I decided to step out to have a listen myself and see what I could still improve, but the engineer told me the version I had just recorded was so strong he was going to mix it on the spot. He didn't even ask me any money for it or nothing! Evening fell and we passed by King Tubby's to have two dubplates cut… Now that same night Black Scorpio was holding a dance, so we decided to approach Jack Scorpio and ask him to play the tune so we could see what it would do. At first Jack gave us the cold shoulder telling us he couldn't play a tune he'd never heard, but we persevered and later that night he gave the tune a quick listen. He just listened to it for a few seconds on his headphones and asked: "Who's singing this?" Ossie replied: "This little youth right here called Triston Palmer!" Scorpio just stopped the dance and announced: "Listen up, I have a song right here and I assure you this will mash up the world! A little youth named Triston Palmer recorded this, remember that name!" He put on the record and the place went mad. Now I have to admit a lot of people attending the dance were from my neighborhood so they know who I was, but things were quickly getting out of hand… so much so even that the police arrived at the venue! I was still under age at that time, but luckily a friend of mine called Tony Martin quickly showed me a back way out. About a week later that same tune hit the charts, but subsequently was taken off again as it was deemed unfit for public airplay because of the content of the song. When it kept on selling, they couldn't keep ignoring it though and eventually it was reinstated and even reached the number one spot."

You continued collaborating with Ossie Thomas eventually running your own label together.
Triston Palmer: "Yeah, that label was called Black Solidarity and was run by Ossie, me and another brother called Phillip Morris. We put out tunes like 'What A Bubbling', 'Trash And Ready' and 'I Am Ready', a version over the Taxi riddim. Around that same time a guy named Barry Clarke brought me a riddim he wanted me to do a version over; that eventually became 'Take My Hands' (Afro Eagle, 1981, red.) which once again landed me on the number one spot in the charts. Now at that time there was this radio disk jockey called Barry G and at a certain moment he did an appeal on his show asking producers not to put out anymore Triston Palmer tunes as I was taking up to many spots in the charts! (laughs) It was also around that time that Jah Thomas came looking for me. He told me he wanted me to do a song based on an incident that happened at some dance, a tune called 'Entertainment'. That same evening he made me listen to the riddim at King Tubby's, I recorded my vocals and Scientist mixed it the same night. Jah Thomas took the tune to one of the first sound clashes in Jamaica at a venue called Skateland; Killamanjaro played the tune and trust me when I tell you the clash was finished there and then! I continued to work with Jah Thomas and together we still released tunes like 'Joker Smoker' and 'Run Around Woman'."

What became of Black Solidarity and your relationship with Ossie Thomas?
Triston Palmer: "Well we're friends still you know, but as it happens in life, I got into a relationship, had some kids, so I had to start looking out for my family and provide; so what I did was start up my own label called Star Creation. That label is my legacy to my children. My son is into music as well, playing keyboard and drums, and even though he shows promise, I want him to finish his education first as I don't want him to fall in the same traps as I did."

Would you say you come from a musical family?
Triston Palmer: "Not really, but my mother used to be the leader of her church choir and I guess that's where I got my first influences as a singer. Apart from that sound systems would be blasting their music in the area where I lived all the time, so I can't say I was deprived of music. (laughs)"

Didn't your mum mind you running around from studio to studio and from dance to dance at that age?
Triston Palmer: "Well, let me tell you the truth… I was going to school same as any other kid, but my focus was completely on my music, so I used cut classes and skip school just to be able to go to a recording session. You have to realize that I had already had 5 or 6 number one hits and my mother still didn't have a clue I was pursuing a career in music. Eventually she was told by one of her friends and when I found out she knew, I started trembling with fear and hid behind an outside wall. All I could hear was her voice calling out my name. I said to myself: "Jesus God what am I going to do?", but in the end I went for the short pain and admitted everything, from hooking up with Tony Tuff and Sugar Minott to sneaking out of my bedroom window at night. She listened to me and I was really expecting her to get furious and beat me, but instead she just asked: "So, you're a big singer then?". I replied: "Yes mama, I'm a good singer!". She sighed and told: "Ok then, go now, I'll talk to you later.". The next morning she called me over and told me: "I don't want you to get involved in anything bad, but if you're head's set on becoming a singer, I won't stop you.". That didn't mean my career didn't cause any more surprises for her after that though. I remember one day a red BMW pulled up to our house and a Rastaman got out and approached my mom asking: "Evening mommy, I don't know if I came to the right place but can you tell me if there's a singer by the name of Triston Palmer who lives here?". Worried that I'd done something wrong she replied: "Why, what did he do?", but the man quickly replied: "Nothing mom, I'm just looking for him!", and he introduced himself as Bob Marley. Behind his car a truck full of men had pulled up, which I later learned were prisoners who had been granted special leave. Now Tony Chin had watched the whole thing from across the road and came over. He offered to accompany me, so in the end my mother gave in and thus I ended up giving one of my first big shows at the General Penitentiary (now Tower Street Adult Correctional Centre, red.), which also featured Bob, Jacob Miller and the Soul Syndicate band. So I really have to give thanks to my mum for being so understanding and trusting me."