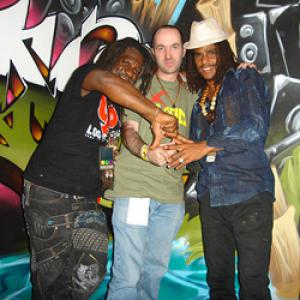 Winston, you've got a longstanding friendship with Earl Sixteen, how did that relationship start all those years ago?
Winston McAnuff: "I met Earl after my father had passed away. At that time I had just moved to Kingston to live with my sister. I had just written a song called 'Malcolm X', but since the producers didn't like my voice at that time, I asked Sixteen to voice it for me. It was only when Dennis Brown released his version of the song that it became a real hit, though. Riding on his success, Earl and I recorded a second version on Derrick Harriott's Wild Flower label."

At a time when most other reggae artists were writing about figures like Haile Selassie I or Marcus Garvey, how come you chose to write a song about Malcolm X?
Winston McAnuff: "Well, I had heard Burning Spear's 'Marcus Garvey' and I don't know if you know this, but Malcolm X's father Earl Little was a good friend of Garvey's. I wanted to write a song about someone of importance and 'Malcolm X' came to me. I can't explain it any other way, because at the time I wrote the song I knew virtually next to nothing about the man."

You were also very close to the late Jacob Miller, so close even that after he passed away Inner Circle asked you to replace him. Why did you refuse?
Winston McAnuff: "Well, at that time I was working for a Jamaican millionaire in the United States and I didn't want to lose that job. I'm still very close to Inner Circle, though. They're actually the ones that produced my 'What The Man A Deal Wid' album (originally released in 1978 and re-released by Makasound in 2004 as 'What A Man A Deal With?', red.)."

How do you remember Jacob?
Winston McAnuff: "Jacob was an angel spirit man! I was there the day he drove off and died. He was doing some work in the studio and he left to take a woman to Halfway Tree. On the way back, he crashed his car and died. It was just a freak accident."

You're also known as the 'Electric Dread'. How did you become known by that name?
Winston McAnuff: "One night, a photographer was trying to take my picture during a stage show and he told my producer, Derrick Harriott, he couldn't get a good picture of me because I kept moving like electric across the stage. It was Derrick who saw a good name for me in that story, so he started calling me 'Electric Dread' and it stuck."

The whole "second chapter" of your career, if I can call it that, started when you met two guys from France, who, at that time, didn't even know all that much about the music business.
Winston McAnuff: "No, they were journalists! (laughs)"

From that meeting sprouted what is now Makasound, one of the best roots labels in Europe. How did that whole story start?
Winston McAnuff: "I came over to France for Patate Records to do a show with Alton Ellis, Earl Sixteen and Rod Taylor. These two guys turned up with an album of mine that was pirated by Culture Press. We got talking and when they travelled to Jamaica a while later, they came to see me again. Actually, they called me and told me they only had money to pay a hotel for a couple of days, if I could please put them up at my place for two weeks! I agreed and went to pick them up in Kingston. At that time, I was still holding onto an album of mine, 'The Diary Of The Silent Years' (Makasound, 2002, red.), that had been on the shelve for over twenty years. I made them listen to it and asked them if they saw a way to get it distributed for me in Europe. When they got back to France, they called me and told me it would be easier to start their own company and if they could please use the first part of my name to use as the name of the label, which of course became Makasound. In Jamaican patois "maka" also means "wicked" or "thorny"."

Your most recent album for them to date is called 'Nostradamus'. What's your fascination with that figure?
Winston McAnuff: "My brother Sean, who lives in England, wrote that song a couple of years ago. Because I've been spending so much time in France over the past years, I wanted to do something that related to French culture, so I chose to call the album 'Nostradamus' (Nostradamus was born Michel de Nostredame in Saint-Rémy-de-Provence in the south of France, 1503, red.) It was the right time to big up this prophet!"

You got your two sons now who followed in your footsteps; Matthew as a singer and Kush behind the drums...
Winston McAnuff: "Yeah, and then there's the third one, Ishmael, who's a rapper."

Having experienced the ups and downs of a career in the music business first-hand, did you encourage or try to discourage your sons from following that same path?
Winston McAnuff: "I've always been happy with their choices, because I want my sons to do what they want to do. Yes, it's a rough road, but if that's where their heart is, then I have to support them. Matthew has been singing ever since he was a baby, you know, so for him it definitely wasn't an overnight thing."

Matthew, you must feel blessed with a father like Winston by your side?
Matthew McAnuff: "You can definitely say that, yes! My father has been like a guide to me on my road through life, so I have to big him up every time."

Everything really started for you when you participated in Makasound's Inna De Yard project. Most of the other artists involved in that project are roots veterans of your father's generation, so how did you get involved in that project?
Matthew McAnuff: "Well, again that was through my father. He told me about the project and asked me if I would be willing to contribute a song. I went home and started writing the same night. That's when I came up with the lyrics for 'Be Careful'. When I sang the song for Chinna (Earl 'Chinna' Smith, red.) the next day, he really liked it and wanted to record it straight away."

'Be Careful' is the kind of song that hits you from the first time you hear it, a killer tune. How long had you already been running around with that tune in your head, before you put it to paper?
Matthew McAnuff: "To be honest, I just came up with it for the project..."
Winston McAnuff: "(interrupts) I remember I was quarrelling with him, telling him: "Matthew, I already told you last night to get that song finished!" He was still finishing the final verse in Chinna's yard!"

Did the fact it became such a big hit in Europe surprise you?
Matthew McAnuff: "I have to say no, because the vibes I was getting from that song when I was still writing it, were already very powerful. It was like an energy coming through me. I never realised it would become this big, but I knew people were going to like it."

People are now already looking forward to your debut album. Does the fact that first song was such a big hit, put the pressure on for you?
Matthew McAnuff: "(smiles) Well, to tell you truth, in a way it does, yes, but I like the feeling because it inspires me to try and do even better. One always has to keep challenging oneself."