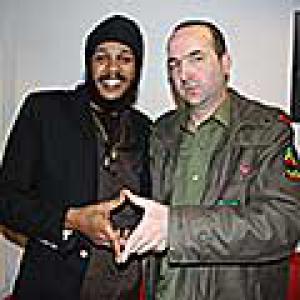 Yaniss, is it true you already started your career in the music business at the tender age of ten?
Yaniss Odua: "That's correct, yes. I took my first steps alongside my cousin Daddy Harry who operated his own sound system called Volcanic MC. He started out as Daddy Irie, but after a printing error that changed to Daddy Harry; Harry being his real first name. In 1992 I released my debut album, the self-produced 'Little Yannis'. To tell you the truth, once I'd had a taste of the music business, I was hooked. I was still attending high school at the time and actually doing quite well at it. Music was something I stumbled upon haphazardly and because of the fact my cousin invited me to join him on stage one day."

The album that took your career to an international level was 'Yon Pa Yon', released in 2002. The album also featured a tune called 'La Caraïbe', which in time has evolved into an anthem. Did you already feel you were onto something when you recorded it?
Yaniss Odua: "Not really, no. With that song I just wanted to express my views as an islander. I remember, Small/Sony Music, the record company I was working with at the time, wasn't too taken with the message of 'La Caraïbe', describing it as being too generalizing. I still often notice a certain unease whenever the history of the French Caribbean is addressed and for me 'La Caraïbe' was the ideal way to break the taboo."

Linked to the views you expressed in 'La Caraïbe' is the fact you got a distinct disliking for the word "Antillean".
Yaniss Odua: "That word simply has no meaning to me! I tried to look up the etymological history of the word and found it's supposedly derived from "Antillia", a ghost island to the south of Spain (Antillia or Antilia was a ghost island located somewhere in the Atlantic Ocean of the west coast of Spain, red.). That explanation made me feel as if they somehow wanted to deny our existence. Personally I consider myself to be afro-Caribbean and don't identify with an Antillean identity at all. My ancestors were Africans who mingled with the original inhabitants of the Caribbean islands, hence "afro-Caribbean", a label which defines my identity both historically and geographically."

Together with Matinda and Straïka D, you started the Legalize Hits label back in 2007. What prompted that move?
Yaniss Odua: "It was a period when a lot of the established labels were starting to merge because they were experiencing financial difficulties. In consequence a lot of artists were simply shown the door. If we wanted to continue to produce the music we loved, we had to step up and do things ourselves. The fact the three of us decided to go at it together was simply because we felt there was strength in numbers. The whole Legalize Hits experience taught me a lot about production and the finances required to record and distribute an album."

Last year you released the 'Moment Idéal' album. What ideal moment does the title refer to?
Yaniss Odua: "I'm often asked why I always take a long time to complete an album and the answer is that I simply like my job and try to do it to the best of my abilities. I've never strived for quantity, but/and prefer to focus on quality instead. I'm always recording new songs and keep on reworking them again and again, until the ideal moment arises to release them."

You just mentioned quality there. Was that also the reason you opted to go to Jamaica to record 'Moment Idéal'?
Yaniss Odua: "It was something I already wanted to do for the longest time and this time everything fell into place to make it a reality. I financed and produced this album myself, so I could do things the way I really wanted them done. I had the great fortune to be able to work with Clive Hunt and the whole thing turned out to be an excellent experience."

For the album you once again created a song that grew into an anthem in no time; I'm of course referring to 'Rouge Jaune Vert'.
Yaniss Odua: "That song evolved from an experience I had seeing the color combination red gold and green on a bit of packaging. Spotting those colors on an everyday item instantly put a smile on my face and I decided to try to capture that sentiment in a song. In 'Rouge Jaune Vert' I tried to explain the significance these three colors hold to Rastafarians like me and to descendants of the African diaspora in general. I imagined a world where this banner would be flown everywhere. The song's success is proof I'm not the only one feeling this way. I'm convinced the power of this color combination transcends Rastafarianism or pan-Africanism."

Let's end on a Rastafarian note then. What does that philosophy, that way of life, represent to Yaniss Odua?
Yaniss Odua: "To me being Rasta first and foremost means respecting the ones close to you, respecting others and respecting the environment we all have to live in. If you want to be respected yourself, you have to return the sentiment. I don't think there was a specific turning point in my life when/where I became a Rastafarian; I was already living a certain lifestyle and thinking accordingly and I gradually realized there were several similarities with the Rastafarian philosophy. These days being Rasta to me just means being able to be myself."