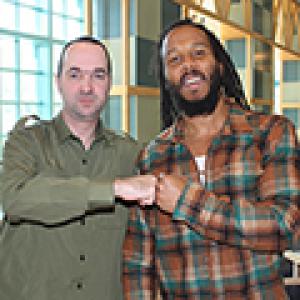 Ziggy, you don't seem to shy away from genres that are outside the scope of reggae music, but would you ever consider doing an album without influences from reggae or the Caribbean?
Ziggy Marley: "(decided) No, I think that would simply be impossible, as that is who I am and I cannot run away from myself. I cannot be who I am not and reggae is in my roots. That being said, in the end reggae is just another label we put on a certain type of music and personally I try to steer away from labeling things as much as possible. I will always embrace reggae music, but I won't allow myself to be confined by the limitations of the genre. I'm a free man and like to write my own set of rules to follow, all the while maintaining my respect for where I'm from. I really think that's the way to go if we want to keep on pushing reggae forwards. As my father used to say: "Reggae cannot live in the past!", and if it's to have a future, it's up to us to be the catalyst for that. Apart from my father, I've been influenced by people like Miles Davis and Fela Kuti; all artists who pushed the limits of their sound."

For the sleeve of 'Fly Rasta' you opted for a painting by Souther Salazar. Would you say modern art is a passion of yours?
Ziggy Marley: "Yeah man, I love art. As you might know, I worked with an artist called Jim Mahfood for the creation of the 'Marijuanaman' comic and that collaboration already sharpened my senses where modern art is concerned. That's why I also decided to incorporate it into the design of the album; in fact I wanted the album to be like a complete audiovisual work of art. What drew me to this particular piece by Souther Salazar was the fact he'd incorporated a Jamaican flag into the composition. Some people think I commissioned the piece especially to suit the album, but that's not the case; it was an existing piece that fitted the album perfectly. At the time when I picked this piece I was still thinking of calling the album 'A Life On Mars' instead of 'Fly Rasta' and the composition including a sort of rocket ship fitted that title perfectly. It was only when I got Jim Mahfood to do the painting for the video of 'Fly Rasta', that I decided that should be the final title of the album. Even with that changed title I think Souther's painting still makes sense, as to me it represents a new consciousness, a new awareness of spirituality. By using 'Fly Rasta' as the title for the album I wanted to propel Rastafarianism into the future. I grew up surrounded by some of the elders of Rastafarianism (Bob was a faithful student of Mortimer 'Kumi' Planno, red.), what made that I never really felt drawn to the more militant, more aggressive form of Rastafarianism that attracted many of my peers and people of my generation. However that doesn't mean I don't feel Rastafarianism has to evolve as well; as Rastafarians our thought process cannot be limited by dogma. The Bible is only a door that opens our consciousness, just as the Quran or the Torah might do. Knowledge is infinite and should not be restricted to one book, or one set of rules. 'Fly Rasta' symbolizes the spiritual evolution I've gone through over the years and that's why rather that shouting: "Rastafari!", I sing: "Love is my religion!", because in the end love is what it all boils down to."

Speaking about love, with the 'I Love You Too' project, which started out as a song, then was turned into a children's book and is now also available as an app, you're reaching out to a whole new audience. Is that just you making sure you'll still have a fan base in the future or is there more to it?
Ziggy Marley: "(laughs) Well, that too of course, but after I'd finished 'Love Is My Religion', I was just pondering on what project to tackle next. I could just as well have done another record, but then it dawned on me I'd been ignoring trying to address children with my work. If I pretend I'm making my music out there for the betterment of mankind, I cannot ignore children, as they represent the future. More importantly, a child's mind is like a sponge, eager to soak up anything you throw at them and often looking at it without prejudice. That's why I decided to turn that song into a children's book and to make it more interactive we now also introduced it as an app."

From the guests appearing on 'Fly Rasta', veteran deejay U Roy is the one that definitely stands out.
Ziggy Marley: "I always try to surround myself with greatness and when you're talking reggae history, U Roy is definitely among the greats. To be honest, I not only invited him because I wanted him to be on the album, but because I wanted to meet him in person and get to know him. It's a privilege to have someone of his stature be part of the album."

In the past Stephen did most of the deejay parts on your albums.
Ziggy Marley: "(laughs) Yeah, I guess I could have called on him too, because even though he's doing his own things these days (Stephen was a member of Ziggy Marley & The melody Makers from 1979 to 2002 and now performs as a solo artist and produces for his brothers and others, red.), I'm sure he would still do it if I asked."

After a long period of absence you also worked with your sisters Cedella and Sharon again, making it almost a reunion of Ziggy Marley & The Melody Makers.
Ziggy Marley: "You know, back in our Melody Makers days, we were always experimenting with different vibes and sounds and that was also what I wanted to do with 'Fly Rasta', so it felt only natural to invite them to participate in the project. I feel their voices bring a fresh energy to my music and their harmonies have a certain unique quality I haven't really found in other backings I've worked with in the past."

As a Marley, you're a household name in Jamaica, but is your music as well and is that even something you still aim for?
Ziggy Marley: "Well, these days my father is the global icon for reggae music, but back in his day even his music was criticized now and again for being too commercial or not being Jamaican enough. Personally I don't feel I have to compete with the music coming out of Jamaica. I'm not trying to be Jamaican or sound Jamaican; I just try to be myself."