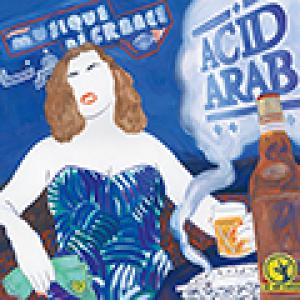 If you're a fan of Omar Souleyman's version of Syrian dabke music, you should definitely check out 'Musique De France', the long player debut of Acid Arab. Acid Arab are actually Parisian deejays Guido Minisky and Hervé Carvalho and Syrian keyboardist Rizan Said, who also plays a leading role on the albums of Omar Souleyman, can also be heard on 'Musique De France'. For the vocal part of the album Minisky and Carvalho called on a host of guests: there's Turkish saz player and vocalist Cem Yildiz, the sisters Haim from A-WA (whose 'Habib Galbi' Acid Arab remixed for the trio's eponymous debut album), and finally the king of raï-rock Rachid Taha, also makes an appearance. With the title of the album the duo clearly wanted to make a statement: the sound of Acid Arab may contain influences from Moroccan gnawa ('Tamuzica'), Syrian dabke ('Le Disco', 'A3ssifa') or Turkish arabesque pop ('Stil'), radio stations like Radio Nova or Beur FM have been broadcasting Arab music for years now and artists like Khaled, Rachid Taha and Cheb Mami are real stars in France, so meanwhile this type of music has become as French as that of Charles Aznavour.