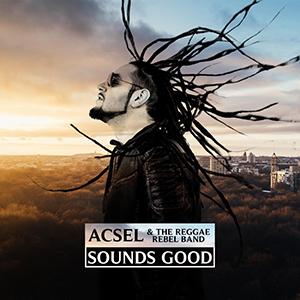 Acsel & The Reggae Rebel Band is an Italian formation from Villa Bartolomea, a small village near Verona, founded by front man Alex Viaro aka Acsel. Viaro took his first musical steps in the Italian hip-hop scene, first as a solo artist but from 2011 also as a member of Soci Alla Pari, a band that mixed hip-hop with influences from dancehall and reggae. The reggae virus got hold of Acsel, leading to the formation of The Reggae Rebel Band in 2013. 'Sounds Good', for which they collaborated with producer Ciro Pisanelli aka PrinceVibes, is already the band's third long player to date. In the track list, 12 new songs stylistically varying from upbeat ska over rocksteady to dub and more electronically flavored reggae, content-wise focusing on the constant search for enough inner strength to face the setbacks life throws you. For three tracks, Acsel and his companions also invited vocal guests. 'Let Loose', a track that ends just a bit too abruptly, features Jamaican superstar Anthony B, for 'Just Love' they invited Sun Sooley, a French singer-songwriter of Senegalese descent, but our favorite combination tune on 'Sounds Good' is 'Rockers' featuring fellow countryman Raphael. Apart from those collaborations, the track list includes songs like 'Safe And Sound', in which Acsel deals with bullying and psychological violence, 'Rototom', an ode to the reggae festival of the same name where the band performed last year, and our personal favorite (next to the aforementioned duet with Raphael, 'Rockers'), the up-tempo ska-tune 'Peace'. Acsel struggles with somewhat of an Italian accent, but none the less we'd like to conclude with: 'Sounds Good'!