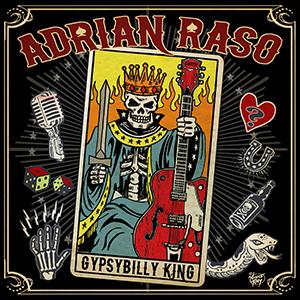 Canadian guitarist Adrian Raso first appeared on these pages on the occasion of the release of 'Devil's Tale', his 2014 album recorded in collaboration with Romanian brass band Fanfare Ciocarlia. On this new long-player, Raso crowned himself 'Gyspsybilly King', a reference to his unique guitar style in which influences from Django Reinhardt's gypsy jazz or "jazz manouche" as well as Brian Setzer's rockabilly riffs can be heard ('Beelzebaby Swing'), and the spirit of Johnny Cash's "deep south voodoo" weighs in as well. In 13 tracks Raso takes you from a smoky club in Paris (opener 'Eric The Baker', 'Bobolobo') to a seedy after-party bar in Prague ('Emilja's Waltz'), then suddenly heads down a dusty alley in southern Texas ('One Last Time', 'Tres Pistoleros', 'Once Upon A November', a title with a clear nod to the cinematic works of Sergio Leone) and ending up in the streets of New Orleans ('St. James Infirmary'). 'Gypsybilly King' has become a largely instrumental album, for which Adrian, among others, collaborated with Michael Bland (drummer in Prince's band) and Stray Cats bassist Lee Rocker. In 'Allumette' and 'Dark Waltz' singer Christine Zufferey provides a French note and in the aforementioned 'St. James Infirmary', a reinterpretation of the eponymous jazz standard especially known in Louis Armstrong's version, Tamara Marshall's voice can be heard. 'Catch The Devil By Its Tale' and enter the musical realm of 'Gypsybilly King' Adrian Raso!