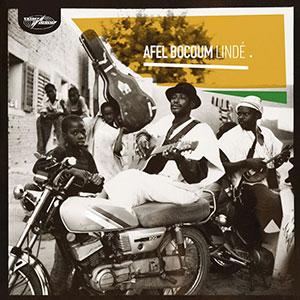 After years of working with the Belgian Contre Jour label, Afel Bocoum returned to Nick Gold's renowned World Circuit Records, where it all started with 'Alkibar' back in 1999.

Just a glance at the list of names of participating musicians already makes this new album look promising. Executive producer is none other than Damon Albarn, on percussion and drums the lamented Alpha Ousmane 'Hama' Sankare and afrobeat legend Tony Allen can be heard, Sidiki and Madou Diabate - son and brother of Toumani Diabaté - play kora, ska and reggae veteran Vin Gordon can be heard on trombone, Joan as Police Woman on violin and Songhoy Blues' Garba Touré on guitar.

Album title 'Lindé' refers to the wild expanse surrounding Bocoum's birthplace Niafunké, and Afel's main goal with this new long player was to bring a message of hope, solidarity and unity to a world full of uncertainties and a homeland plagued by jihadists, poverty and tribal disputes: "We have to meet each other, talk to each other, look each other in the eye and tell the truth. If we're not united, I can see no solution. Our social security is Music. That's all we've got left. People love music, so we have to make use of that fact!".

'Avion', the first single from 'Lindé', is an ode to aviation and in all its optimism, and with the current COVID-19 crisis in mind, sounds a tad out of place. More personal in tone is 'Penda Djiga', dedicated to the daughter of a friend, to whom he had promised to come and play at her engagement party, but which fell through after a police intervention.

In the reggae flavored 'Bombolo Liilo', Vin Gordon's trombone was given a leading role, and in terms of content the song is yet another warning for the many reckless migration attempts, desperately trying to reach Europe: "The feeble percentage of people who manage to make it to Europe shouldn't cry victory, because there are still many problems left fort him to overcome, including finding a place to live, a job to do and food to eat. They mustn't forget that, from the moment they arrive, they're subject to the laws of the receiving country. And then they have to learn how to communicate and deal with the climate. Add it all up and you'll see that overall there's more loss then benefit, and finding the anticipated happiness is just a lottery. More often than not, you're talking about a 1 in 100 chance of success".

'Kakilena' is of the same order of content and in 'Sambu Kamba' Afel reaches out to the rebels and jihadists in his country: "It's in unity, understanding and social cohesion that a country can grow. This is an appeal to all Malians at a time when major decisions need to be taken. We must talk to each other. It's crucial if we want to achieve lasting peace.". The call for renewed unity in Mali also continues in songs like 'Yer Gando' and 'Jaman Bisa'.

'Djougal' is a tribute to Djougal Nango, the man who managed to unite the farmers of Niafunké in a single cooperative: "He began by establishing "banks" of rice, millet and agricultural essentials in the villages. Then he called them all to a meeting and explained the relevance of what he had done: "Today, it's all free. Tomorrow, you'll manage your own affairs!", he told them: "You can contribute a regular sum to buy millet, rice and essentials. That way you'll be protected from disagreeable surprises. The farmers once lived in a state of disorder and chaos, today they consider themselves happy!".